Yorgan De Castro has a feeling his big moment is approaching. He'll get a chance towards it at UFC 249 against Greg Hardy.
By Zac Pacleb, on Twitter: @ZacPacleb • May. 7, 2020

The setting was almost too perfect for Yorgan De Castro’s UFC debut. Against Justin Tafa, De Castro scored a jaw-dropping one-punch knockout in front of a record-breaking crowd inside Marvel Stadium at UFC 243. A first-round knockout is always an ideal way to start your UFC career, but for De Castro, the scene was truly poetic. His nickname, “The Mad Titan” is derived from the Marvel comics character “Thanos.” You couldn’t write a more fitting scenario.

And yet, talking to De Castro for any stretch of time reveals a person who couldn’t be further from the Infinity Stone-collecting supervillain.

“I told them they gotta give me a different name like Shrek or something like that,” De Castro said.

It’s true. The heavyweight up and comer has many layers to him. He’s a family man who lives in Fall River, Massachusetts, with his wife and daughter. He is the first UFC fighter from Cape Verde. He still works security at B.M.C Durfee High School.

De Castro is a fighter at the end of the day, literally, as most of his days end with him going from his detail at the school to Infinite Fitness Sports Performance and Regiment Training Center as he hones his craft. And it was one of his coaches who gave him the Marvel-inspired moniker, claiming De Castro “stole souls” when he walked into the cage.

“If you grab the last chicken wings in the supermarket, I’m slapping you.”

He’s joking about that last point, and his unique bond with his community keeps him out of any sort of confrontation in public. That said, he admits that his current status on the UFC roster put a target on his back at the gym, where he said he gets his “ass kicked” by training partners.

The target shrank amidst the coronavirus pandemic as his gym only opens for his training sessions. De Castro kept busy even as the world slowed to a standstill, forcing his scheduled bout with Greg Hardy in Columbus to be postponed. De Castro still works a truncated schedule at the school, handing food out to families in need and “trying to be part of the solution.” 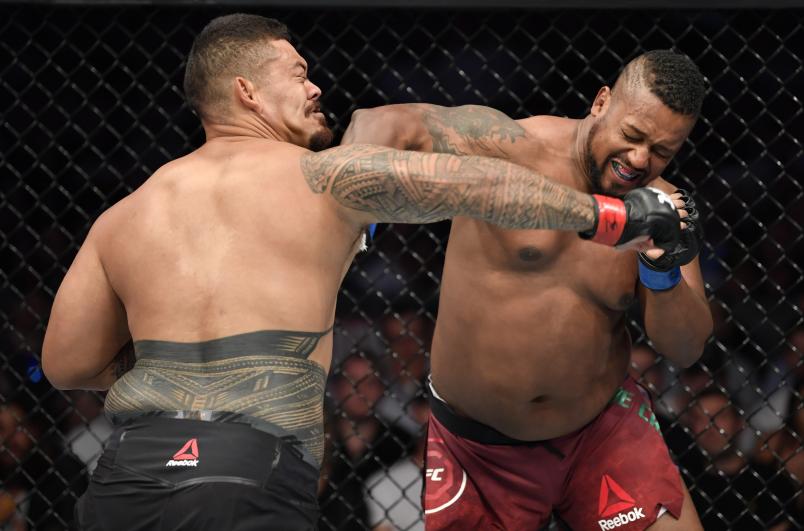 He was ready to go when his fight with Hardy got moved to the April 18th version of UFC 249, but when the card was postponed, he took his foot off the gas pedal a little bit and spent the time relaxing with his family.

One night, De Castro had just ordered a large pizza and was sipping beer while watching movies with his family when he noticed his constantly buzzing cell phone. His manager let him know the fight with Hardy was back on for May 9, and he responded promptly.

“I said, ‘Oh, s**t. I guess I’m going to put the pizza and beer down,’” De Castro said. “I stepped on the scale, and my weight was still good, and I said, ‘Thank God’ and told them they could finish the pizza.”

More than just letting them eat the rest of his cheat meals, De Castro is in pursuit of mixed martial arts success to give his family a better life. Once just a kickboxer in Portugal, an uncle convinced De Castro to transition to mixed martial arts, and after scoring a first-round knockout in his amateur debut, he was hooked.

That internal motivation and love is enough for him to get up for his highest-profile matchup to date. Hardy is a name people know, and while De Castro said he received supportive messages from people hoping he would hand Hardy another loss, De Castro isn’t allowing the negative energy to charge him up for this matchup.

“I think he’s a super, super strong athlete,” De Castro said. “Fast. He’s got good movement, and he’s a good fighter. I think he’s mixing up his punches and kicks very well now. He’s still improving, so I’m glad I’m fighting him right now because I think he’s going to be too good in a year or two. And I think right now, I’m a better fighter, and I think I’m going to get it done.”

After he tallied his first UFC win, De Castro said he started to receive more notoriety, humorously recounting his experience the week after his fight when he attended the following week’s card in Boston.

Fans were coming up to him, and after the friendly encounters, De Castro tried to figure out whether he knew them until his wife reminded him he had just knocked someone out on television.

“I’m like, ‘Do I know these guys?’” De Castro said. “And my wife would say, ‘No, you don’t know them. You just fought on TV so they know you. Don’t pretend like you know them because you don’t.’”

De Castro can’t help it, though. One of the quickest-smiling fighters with devastating power, he welcomes the opportunity to use his platform for the benefit of his community.

After scoring a contract on Dana White’s Contender Series, his debut win capped a bright year for the heavyweight ranks. A division always welcoming of new talent, the heavyweights saw the likes of Jairzinho Rozenstruik and Cyril Gane make plenty of noise as they broke into the top 15 in 2019.

For De Castro, he is hoping a win against Hardy catapults him into a fight with a ranked opponent. At 33 years old, he’s not looking to waste much time. His 2020 goals include breaking into the top 10 should the schedule permit him getting the proper bouts, but he explained that he didn’t have much issue with training during the pandemic. While he said an eight-week camp is ideal, he has held Hardy in his sights for the better part of five months.

“I think this is the right moment.”