A first-round finish in Dana White's Contender Series launched Yorgan De Castro into the UFC, and he doesn't want to waste any time.
By Thomas Gerbasi • Jul. 25, 2019

Sure, Yorgan De Castro was impressive in stopping Alton Meeks on Dana White’s Contender Series on June 18, but it was his daughter Kyara who stole the show at the UFC APEX in Las Vegas as she cheered her dad on.

And to think, she didn’t even know it was take your daughter to work day.

“She didn’t know I was about to fight on Tuesday,” laughed De Castro. “She said, ‘Daddy, let’s just have fun.’ So on Monday, we walked all around Las Vegas, taking pictures and having fun. She had a good time and it was good to have family with me.”

It was a great trip for the De Castro family, and an even better flight home to Fall River, Massachusetts, as dad went from regional prospect to UFC fighter in the space of the four minutes and 45 seconds it took for him to chop Meeks down with leg kicks and get awarded a contract by UFC President Dana White.

It’s been a whirlwind since, but De Castro isn’t complaining.

“It’s been crazy,” he said. “But good crazy. I’d rather be busy and crazy like this than it was before, so I’m happy.”

Unless you’ve been in De Castro’s shoes, you can’t really know what it means to change your life in less than five minutes. Actually, it was longer than that, as De Castro had to wait for the rest of the Contender Series card to play out and for White to determine who would leave the building as UFC fighters. While he waited, the text messages started flooding in.

“I was getting a lot of texts from all over the place,” he said. “My teammates, my family, all of them were texting – ‘you got a contract,’ ‘you’re gonna get a contract.’ But I wasn’t sure about it. I didn’t know if I did enough to win the contract, but I guess I did.”

He did, and when asked what that moment of hearing his name called was like, he said, “Wow, I’m actually in. It’s been a week and still my heart rate goes high when I think about it.” 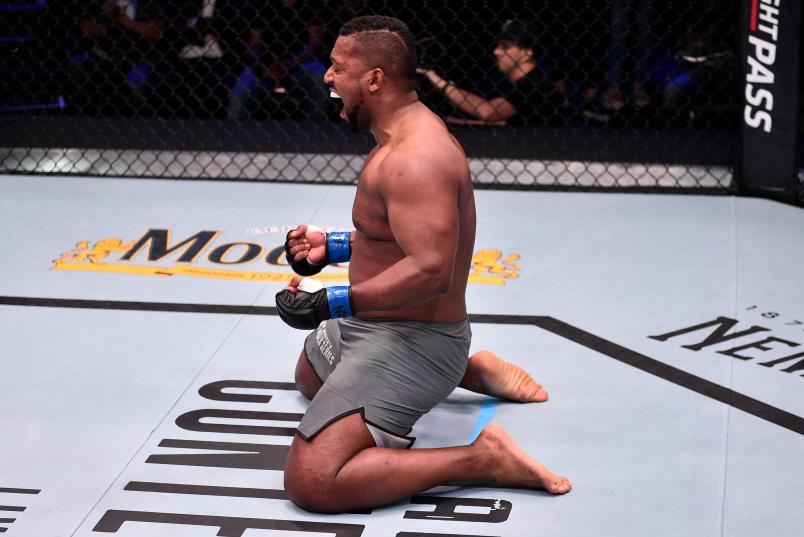 The victory wasn’t just important for “The Mad Titan” and his family and team. It also sent shockwaves around his home country, as he became the first native of Cape Verde to be signed to the UFC.

“There’s actually a big, big reaction over there,” said De Castro. “It was all over the news in Cape Verde and Portugal; they’ve been talking about it and Cape Verde is going nuts.”

This feel-good story isn’t over yet, but De Castro isn’t taking a victory lap.

He laughs, knowing that as his 5-0 record grows on the sport’s biggest stage, there will be plenty of time for vacations in the future. But for now, it’s back to work. And De Castro loves his job more than ever.

“I can’t believe I’m gonna be sharing a locker room with guys like (Daniel) Cormier, Jon Jones, all those guys,” he said. “I still can’t believe it. I think when I make my walk for the first fight, I may cry.”