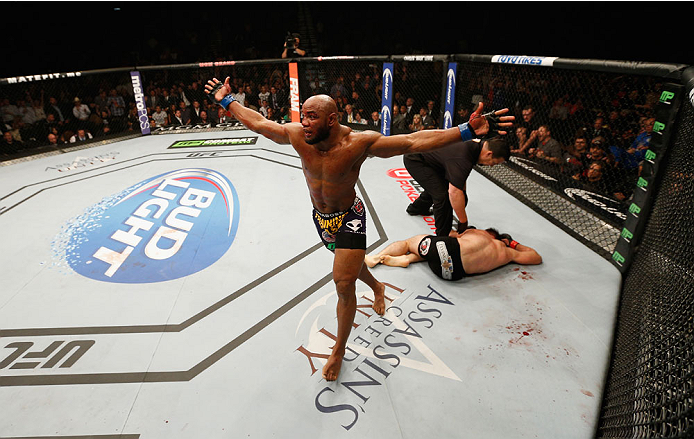 April 18 should have been the biggest night of Yoel Romero’s professional fighting career. Instead, he was left watching, instead of participating, as three of the top middleweights in the world battled it out in Newark, New Jersey.

Romero should have been the fourth, with a match against Brazilian contender Ronaldo “Jacare” Souza the prelude to that night’s main event between Luke Rockhold and Lyoto Machida. It was the type of doubleheader that would likely produce a challenger for 185-pound champion Chris Weidman, depending on who looked the best at Prudential Center, but Romero was left without a fight after he injured his knee.

“It was hard to see because I wanted to be in the cage,” Romero said of the UFC Fight Night card earlier this year. “But I believe everything happens for a reason so I will wait and see how everything turns out.”

Rockhold, who beat Machida on that April card, will get the next shot at Weidman. Souza waits in the wings after defeating Romero’s replacement, Chris Camozzi, a second time. As for Romero, he returns to action on Saturday in Hollywood, Florida against Machida, and he believes that a big win over the former light heavyweight champion could put him right back in the title race.

“I believe with a spectacular performance on June 27 I can definitely make a case for a shot also,” he said.

Spectacular performances are a regular occurrence for the 38-year-old Romero, whose 5-0 UFC record includes four knockouts, one Knockout of the Night and two Fight of the Night bonuses. And little of his body of work in MMA has to do with the stellar wrestling that earned him an Olympic Silver medal for Cuba back in 2000. Instead, it’s been his fists doing the talking, and that’s not surprising, considering striking is in his blood, with younger brother Yoan Pablo Hernandez the current IBF cruiserweight champion of the world in boxing.

“I wanted to become a boxer but my father didn’t want me to,” Romero recalls. “So my other options were judo and wrestling.  I ended up in wrestling and the rest is history.”

Olympic boxers have the pro game to look forward to, though. For Olympic wrestlers, especially in Cuba, the next step is a cloudy one when it comes to athletics. Even with defection, what’s there? Coaching possibly, or most notably, mixed martial arts. So after staying in wrestling until 2007, Romero remained in Germany after a tournament, and two years later he was making his MMA debut.

By 2011, Romero was 4-0 on the European scene, but the United States beckoned, and after a stay in California, he moved to Florida. A loss in his Strikeforce debut against Rafael “Feijao” Cavalcante in September of 2011 slowed him down momentarily, but by 2013 he was in the UFC and wrecking anyone in his path.

His time in the Octagon has been impressive, yet for those who follow the sweet science of boxing, what may be more notable is that unlike previous Cuban amateur greats that come to the United States, blow up in weight and lose the edge that made them special back home, Romero has kept his intensity and focus high as he pursues a world title in MMA.

“I really enjoy what I am doing,” he explains. “My family and team always help keep me focused.  It's tough because so many things can happen, but I have been fortunate enough to have great family and friends around me. God has absolute control of my life.  I hope to fulfill my dream and become champion.”

The biggest step at this point is beating Machida, a crafty veteran who has the style to give anyone fits, and whose countering style could work very well against the always aggressive Romero.

“Machida is a very talented fighter,” Romero said. “He has a unique style and has been a champion before.”

But has “The Soldier of God” figured out the Machida riddle?

“I think we will have to wait for June 27 for that answer,” he smiles. “It will be a great fight.”

It usually is with Romero involved, but would be even greater in terms of a story, is if the two brothers from Cuba one day sit atop their respective sports as world champions. It has been a topic of conversation between Yoel and Yoan.

“We have discussed it and it would a great honor to have my brother as a boxing champion and me as an MMA champion,” he said. “Combat sports run in our family’s blood.”

And in the blood of the Cuban people, and with relations between the United States and Cuba better than ever, could Romero picture a UFC event in his home country one day?

“This (the opening of dialogue between the two nations) is a great thing for the Cuban people,” Romero said. “I believe the U.S. and Cuba relations will only get better from here and I hope the UFC will one day have an event in Cuba and I would love to be a part of it.”

From a questionable future to the brink of a world title shot and a possible return to Cuba one day, it’s been quite the journey for Yoel Romero, but the reason he’s here is that he’s focused on one step at a time, and the next step is fighting Lyoto Machida.

“My time here has been great and I am very thankful for it all,” he said. “(On June 27) Fans should expect for me to leave it all in the cage.”