"To be a wrestler, you need to have mental strength and you need to be determined, which also helps with MMA." - Yoel Romero 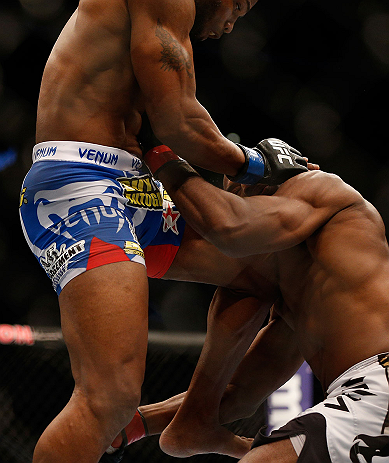 All UFC rookies are not created equal.

Generally speaking, with their trademark black gloves laced-up and entering the famous Octagon for the first time, fighters look like they were just stamped-out using a cookie cutter designed for their division. While physical appearance may not differ greatly because of weight limits, the past experience they come in equipped with, the muscle memory they’ve ingrained into themselves, and their heightened mental preparedness are not readily available information on the surface, but once the bout starts - it becomes a light so blinding, it’s all anyone can see.

At UFC on FOX in San Jose, California, the former Cuban Olympic freestyle wrestling silver medalist made his Octagon debut in eye-opening fashion against the then 8-1 Clifford Starks. “To have a good fight and have fun while doing it,” says Romero about his simple concerns heading into his first fight in the UFC. After watching the mere 92 seconds, one can easily state that Romero accomplished his goals. Romero was flawless, landing all 12 significant strikes he attempted, including that retina searing leaping knee, which went on to win Knockout of the Night.

“If you train hard, anything is possible,” explains Romero. “I did plan it [the flying knee], but how it worked out is something that I could not have known until that exact moment. My performance was the result of all the hard work I put into training, and [Starks] is a good fighter and did not do anything wrong.”

It was shades of former UFC middleweight champion and pound-for-pound king Anderson Silva’s debut, besides being a middleweight. The levels between athletes in the cage at that given moment appeared to be dramatically different. And let’s not forget, the quickly felled Starks was an NCAA Division I wrestler from Arizona State University and trains MMA with several notable UFC stars. Nevertheless, Romero’s speed, agility, and, obviously, power were off the charts in comparison in those 92 seconds, but the most amazing attribute was Romero’s timing and ability to judge what to do when, which are all things fight fans have come to expect from Silva.

The 36-year-old from Pinar del Rio, Cuba, dubbed “Soldier of God” is a new name to the MMA community with a record of 5-1, but Romero has been one of the most popular figures in international wrestling for well over a decade.

“To be a wrestler, you need to have mental strength and you need to be determined, which also helps with MMA,” tells Romero about what truly carries over to MMA from the world of wrestling. As mentioned, Romero was the 2000 Sydney Games’ silver medalist in freestyle wrestling at 85kgs and became a great rival of US wrestling star and 2004 Athens Games’ gold medalist Cael Sanderson.

To put it simply, Olympians are a different breed of athlete.

It’s not guaranteed their success, but athletes of this caliber who have succeeded on the world stage are prepared for the Octagon in a way that the more typical fighter cannot compete in. Olympians are carved out of wood from relentless training and a mindset that comes with it. The championship focus that Romero once had for wrestling can be used on learning striking or Brazilian jiu-jitsu or any aspect of MMA. Olympians have an insatiable hunger and drive for success that rarely let’s the athletes reap their rewards, which is unlike MMA, where one flying knee KO will net a KO bonus almost each and every time.

An interesting side note in the lead-up to Romero’s debut was an interview by MMAFighting’s Luke Thomas with UFC light heavyweight Chael Sonnen about wrestling and MMA. As an NCAA Division I All-American out of the University of Oregon who had a lot of promise in making US’ Greco-Roman wrestling team, Sonnen explained that most simply expect wrestlers to be takedown machines, but that’s not necessarily true, as wrestlers can be quite successful without a blast double-leg takedown. Sonnen went on to use Romero as an example of this, while giving Romero a lot of credit as well.

“In fact, there's a Cuban fighter right now named Yoel Romero, who for my time is as good as any wrestler that ever lived during that generation - during the Cael Sanderson/Les Gutches/Yoel Romero phase - but he didn't score a lot of points with takedowns,” asserts Sonnen. “He scored his points with tilts and turns, and defensive techniques on top. So, when he gets into an MMA situation, it doesn't mean he's going to be able to get on top, and that's really misunderstood by a lot of people.”

To further the point, maybe fight fans shouldn’t expect Romero to even attempt takedowns. “I am unpredictable and different,” affirms Romero, who has scored knockout finishes in all five of his wins. Standing and banging is in Romero’s blood, as his younger brother Yoan Pablo Hernandez is a 28-1 professional boxer with the IBF cruiserweight belt around his waist. In his bout with Starks, Romero threw a bevy of low sidekicks to his opponent’s knees before loading up a high sidekick that clipped Starks in the face. It looked more like a taekwondo medalist than a wrestling one.

The coup-de-grace was catching Starks standing flush with a jumping knee. Starks did not shoot in for a takedown and receive a knee to the kisser. In fact, Starks tried to close the gap for a punch when Romero timed him and aggressively sprung at Starks to the point that Romero could have vaulted over the 6-foot tall wrestler. For sure, fighters should be mindful of a takedown because it will be unlikely they will be able to get up from underneath Romero, but, first and foremost, the “Soldier of God” is targeting a striking finish.

Up next, Romero will collide with Brazilian powerhouse Ronny Markes on Wednesday in Kentucky. “He is a very good fighter and we are two very complete fighters,” admits Romero about himself and his opponent, the 14-1 product of Nova Uniao who has taken home three straight decisions in the UFC. A muscular mass, Markes likes to grind his opponents against the cage, work for takedowns, and control his opponents in a way most would imagine a wrestler would. Markes is big and durable, but has shown a limited gas tank and lack of adventure in his standup attack.

In preparation for Markes, Romero is busy in the gym with the world renowned American Top Team at both their headquarters in Coconut Creek, Florida as well as the Kendall location in Miami. “I love everything that has to do with training and I focus on gaining more and more experience,” reveals Romero, who has incredible teammates like aforementioned “Lightning” Lombard and Strikeforce crossover Jorge Masvidal, who is already 2-0 in the UFC. As for any insight to particular highlight reel moves he might be working on for Markes, Romero keeps his cards close to his chest. “The technique that I will use for Ronny Markes will be seen on the day of the fight.”

On November 6th, at Fight for the Troops 3 in Fort Campbell, Kentucky, a middleweight melee of epic proportions will happen inside the Octagon when Romero meets Markes. “It will be an unforgettable fight because whenever I step into the Octagon there will be the presence of God and it works miracles,” states Romero, who sounds more than ready to deliver another blinding light of awesomeness for fight fans around the world.