The Year of The Stun Gun Begins

"I could choose to be either one of those seasoned fighters who win some
and lose some or gamble and fight aggressively to gain the title shot.
I'd rather venture to be aggressive." - Kim Dong Hyun 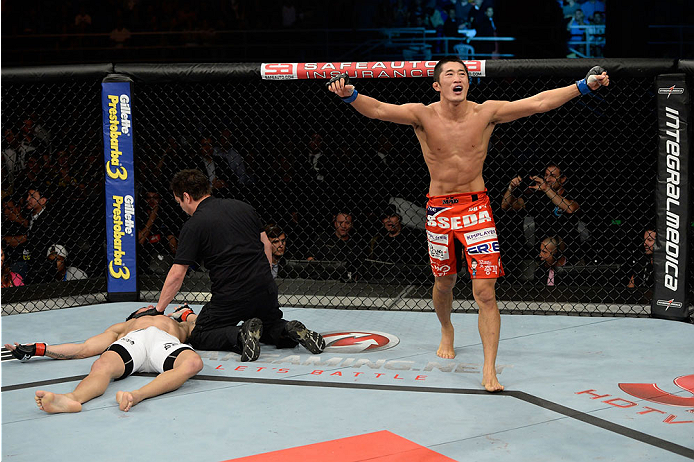 If you run down the UFC resume of South Korea’s Kim Dong Hyun, it’s clearly one of the most impressive out there, as he’s scored wins over Matt Brown, TJ Grant, Nate Diaz, and Erick Silva, just to name a few, since his Octagon debut in 2008.

“You can now see why I deserve to be a title contender,” said Kim through manager / translator Alan Cho as he prepares for a Saturday main event in Macao, China against John Hathaway. “I will fight like one. You will see the true Kim Dong Hyun.”

Some would say we saw that version of the “Stun Gun” last October in Brazil, when he picked up a Knockout of the Night bonus (his first post-fight award in the UFC) for his stirring second round finish of Erick Silva. It was almost like there was a different Kim in the Octagon that night. Gone were the swarming ground attacks that were effective, but less than thrilling to watch, and replacing them was an aggressive assault that saw Kim looking for the finish by any means necessary. And after getting rocked briefly in the second, he got it, with a left hand to the head providing the coup de grace.

It was clearly the defining win of his UFC career, and as Kim explains, expect to see more of the same in the future.

“In the early days of my career in the UFC, I was the only Korean fighter,” he said. “My primary goal was to survive. I had to survive as the only Korean fighter and I felt like I was responsible for the booming of the UFC in Korea. But now, there are many Korean fighters in the UFC and they are performing well. I will fight like Kim Dong Hyun now. I am not young anymore. I am at the most important time of my career. I could choose to be either one of those seasoned fighters who win some and lose some or gamble and fight aggressively to gain the title shot. I'd rather venture to be aggressive. There is no opportunity for boring fighters.”

Kim was far from boring against Silva, and his reasoning does make a lot of sense. As the UFC’s only Korean fighter in 2008, if he failed to gain a foothold in the organization as fans around the world watched, it could have killed any momentum for the sport in his native country. Why bother competing against the best in the world if you’re going to get to that point and fail? So the talented Kim did what he had to in order to win. If that meant a three round grappling match, so be it. But as he kept fighting and winning, his peers from Korea began making their way to the UFC and having success. Now the Godfather of the sport back home can afford to ease up on the reins a bit and chase his own dream.

“Like I mentioned earlier, I couldn't gamble,” he said. “Winning was my primary goal in my early career because fighters were released with two losses. I was thinking that if I don’t survive, the UFC will lose their interest in Korean fighters. Now I don’t have that pressure.”

Now the pressure is to win big, but the 32-year-old Suwon native has no problem with that, and after nearly six years in the UFC, he believes it’s time for him to get a shot at the big guns at 170 pounds. Not only does he feel physically ready, but mentally as well, thanks to some lessons he picked up in his loss to Carlos Condit in July of 2011.

“I was on a five fight winning streak which was the first as an Asian fighter,” recalled Kim, who also had a no contest with Karo Parisyan during that time span, making it a six fight unbeaten streak. “It was the first time for me to get a lot of attention and interest by so many people in Korea and in the media. I had a cameraman and media following me around even when I was cutting weight. I was not able to concentrate 100% on my fight and I was mentally distracted very much. Since the fight against Condit, I learned that if you are not able to concentrate 100%, you might as well give up the fight, and I also learned that the mental game is the most important aspect of the fight.”

Since losing to Condit, Kim has won four of five bouts, with the only loss to Demian Maia in July of 2012 coming due to injury. He’s clearly turned the corner on his career, and on Saturday, only England’s Hathaway stands between him and a major fight at 170 pounds.

“Although he has not fought for a while, he only has one loss, and he is a very talented fighter,” said Kim of Hathaway. “I don’t think he is especially strong in one area, but he also does not have any weaknesses and that makes him a difficult fighter. But I have prepared well.”

And he’s coming to not just win, but to fight. After that, watch out welterweights.

“I am not going to settle for where I am,” he said. “I will do my best to get the title contender spot this year.”