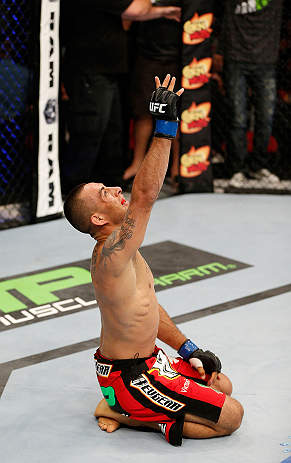 Let’s all agree to forget Yaotzin Meza’s Octagon debut in December 2012. It was taken on short notice, he was flown halfway around the world to Australia for it, and he fought up a weight class.

Instead, let’s focus on the UFC bantamweight’s first fight in his proper division with a full camp behind him last July in Seattle. The night and day difference between the two performances should lead fight fans to be very excited to see more of the Arizona-trained Meza. Nevertheless, the debut loss to Chad Mendes at featherweight with its unfavorable circumstances and outcome added fuel to the fire as he targeted a much needed win against John Albert at UFC on FOX 8.

“I knew I had to go in there and get a win no matter what,” affirms Meza. “No matter what. Against Mendes, I took that fight on short notice and I lost. For John Albert, it was a must win for me. I dropped down to the weight I wanted to be at in the UFC, I had a good weight cut, and going into that fight I felt great. Everything was falling into place. I had a full camp, a great camp. Making that weight was real motivating for me. And seeing him not make the weight was a real boost of confidence for me. Seeing him not make weight meant to me that something went wrong in his camp. I knew that I had to go hard for three rounds and it was a good experience and a great win and that's what I needed.”

Call it intuition, but the 32-year-old product of the MMA Lab in “The Grand Canyon State” knew that 135 pounds is where he needed to be even though he had never fought in that division before. The decision to battle as a bantamweight led Meza to an action-packed scrap with Ultimate Fighter alum Albert. In round one, both parties traded submission attempts, from Albert’s triangle and armbar to Meza’s guillotine. In the second, Meza took over control and, eventually, forced Albert to tap via a rear naked choke halfway through the round.

“We knew he was well-rounded and wherever it went we knew we had to be prepared,” reveals Meza. “We knew he had a good triangle off the bottom and he caught me in it, but I had been put in triangles so many times in camp that it really helped me get out of his. I just had to stay focused and stay calm in those situations. He had me in some tight submissions and I had to get out of them, and I had him in a couple too, but he got out of them. Watching his fights before in the UFC, he always had a good first round and then near the end of that round he seemed to tire. So, we knew he had one good round in him and we had to weather that storm. Towards the end of that round, I felt him getting tired. In the second round, I definitely felt his body fatiguing and that's when I had to take advantage and finish the fight.”

Improving to 20-8 with six submissions, Meza looked game ready and prepared for one obvious reason: “With a full camp, that's where I can shine and show my talent.”

It’s not always easy getting one of those for Meza, as he works a full-time job for the El Mirage Water Department on top of being a professional fighter. During the week, Meza puts in a solid 12 hour day with a little more than half of it dedicated to his city job and the rest in the gym tangling with his talented teammates like Jamie Varner, Alex Caceres, and former UFC lightweight champ Benson Henderson. Thankfully, Meza has been able to stack some weeks of vacation together prior to his UFC bouts for him to fully focus on training.

“I go into work at 6 in the morning,” tells Meza. “I'll take a lunch break from 9-11 to do strength & conditioning then head back to work from 11 until 3 o'clock. At 3, we go to the gym for team practice from 3 to 5. After that, I go home and try to hang out with my 3 boys and take them to their wrestling practice and their events. Then go to bed and do it all again in the morning. It's kind of rough but it kind of does hype me up. I get there in the morning at 9 o'clock for strength and conditioning, but I've been at work since 6. I work out, get dressed back in my work clothes, and head back to work. The other guys are like, 'You're crazy! You're going to work?' I go to work then I come back at 3. It all motivates me. I have good energy when I go to work. Now that I have those rests in between I have more energy. I sometimes feel like I need to slow down, so I don't over train because I have so much energy in my workouts. Now, I get to go home and sleep or just hang out. It motivates me to train even harder now that I'm not working.”

Up next is a showdown in Chi-town at UFC on FOX 10 as Meza takes on Chico Camus. A grinder out of Milwaukee, Wisconsin, Camus is unrelenting in the cage, whether it is for 1 minute or all 15 as “King” has gone the distance eight times in his young career. Thus far inside the Octagon, Camus is 2-1 following a unanimous decision win in his hometown where he outworked Kyung Ho Kang at UFC 164. Camus is both durable and a cardio machine, so hopes of ending it early are for naught and Meza knows it.

In preparation for Camus, Meza is sticking with the highly regarded team he’s been with for the past 5 years, MMA Lab. Brazilian jiu-jitsu black belt under Royce Gracie and head coach John Crouch has put together one of the most respectable and hard-working teams in the sport, filled to the brim UFC caliber fighters. In charge of Meza’s striking are coaches Adam Gillespey and Shihan Nico, while his strength & conditioning is left to Jarret Aki. A familiar name to Octagon enthusiasts, Meza pointed out he has been working three-times a week hitting mitts with teammate and UFC veteran Joe “Diesel” Riggs.

Talk to any member of Crouch’s Lab and they will tell you about the family atmosphere of the gym and the willingness of the fighters to help each other out. For Meza, this hits particularly close to home as his younger brother, Victor, is a part of that fight team.

“My brother is always in there with me,” says Meza. “We meet up in the morning and carpool together to the morning practice. We'll come back to his house and hang out because he lives right by the gym and we'll carpool back to the gym for the afternoon practice. My brother is a big part of my success. He's always been there with me, working out in the gym and doing some road work on the weekends. My brother fights and he's doing real good right now. He's got a real good record, 13-3. He holds the [lightweight] title for King of the Cage. Hopefully, pretty soon he'll be where I'm at in the UFC.”

Lastly, Meza isn’t looking past Camus at all, but there is a bucket list item that he has his heart and sights set on: fighting in Mexico City. The UFC has mentioned their desire to put on an event in Mexico with UFC heavyweight champ Cain Velasquez headlining. As Velasquez is recovering from a successful shoulder surgery, a win against Camus would really help Meza’s cause to put him on that future dream card. The bantamweight could be a perfect fit for the event, as his family is from there, he grew up there, and Meza has fought several times in Mexico before.

“Right when I heard that they were going to Mexico, I was excited,” asserts Meza. “I called [Meza’s agent Malki Kawa]. I was like, ‘I don't know when that card will be, but I would love to be on that card.’ I fought in Mexico City two times and I loved it. The reason why I loved it is because my mom and dad were born there and all their family lives in Mexico City. We go out there a lot and visit. I was born in Santa Ana, California, and right when I was like two months old we moved down to Mexico City until I was 6 years old, so I was raised there. I would love to fight there. That's where my mom's family lives, my grandparents, my aunts. That would be an opportunity of a lifetime for me to go over there and perform for them because they cannot come over here to the States and watch me. It would be a treat for me to go over there and fight for them in Mexico City. When I heard that, I was so pumped. To give me the opportunity to go over there and show them what I do, and for them to watch me fight, it would be great. It would be an honor and that's one of my dreams, for my family to watch me fight in Mexico City.”

On January 25th at UFC on FOX 10 in Chicago, Illinois, two bantamweights will collide as Meza squares off with Camus in an effort to help set the victor apart from the pack with another quality win. “We're going to get it going from the very beginning,” states Meza, who is ready to continue impressing fight fans so that debut loss is a distant and forgotten memory. “My last performance showed a lot of ground game; me getting out of submissions and me finishing the fight by submission. This time we're going to show a different me. We're going to stay on our feet and show a different part of my game that they haven't seen.”