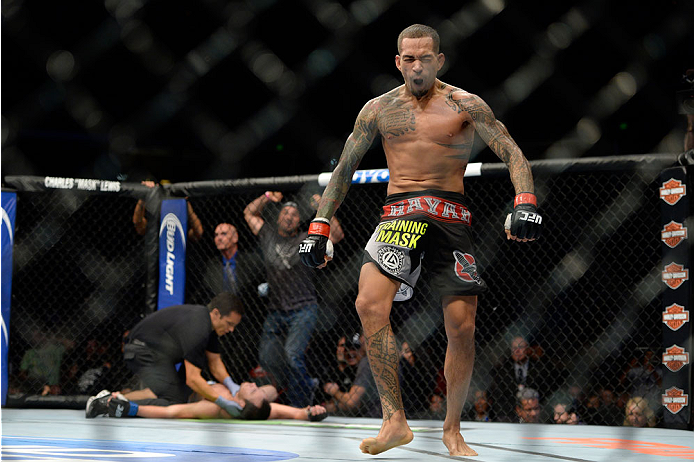 Nothing says “loves to scrap” like a Hawaiian who trains with the Diaz brothers.

The 50th U.S. state has been pumping out tough, talented and thrilling fighters for years, from two-time UFC champion BJ Penn to the litany of rising stars from Gracie Technics like Max Holloway. Actually, Hawaii’s first female UFC fighter - Kailin Curran - made her Octagon debut last month in a Fight of the Night bonus-winning battle. Of course, she did.

Now, intermingle that warrior energy with the “in your face and attacking you at all times” style of California’s beloved Skrap Pack from Cesar Gracie Jiu-Jitsu. All fighters want to hit their opponent twice for every time they’re hit, but Nick and Nate Diaz are aiming to tag their opponent five, ten or 25 times more.

Meet the product of Makaha and Stockton’s marriage, Yancy Medeiros.

“I have a great team in Hawaii and in California,” Medeiros said. “In Hawaii, I train with all the UFC fighters from Hawaii like Max, Dustin Kimura, Russell Doane, Louis Smolka - a bunch of UFC fighters. We all help each other. Then when I come up here to California, I’m with Nick and Nate. Then we’ll go to San Francisco and work with Gilbert [Melendez] and Jake Shields. It’s great. I can’t ask for anything better for me when it comes to having good partners and great friends.”

The 27-year-old lives in Hawaii, where he trains and raises his daughter, but Medeiros travels to the mainland to finish his camp with the famed fighters of Cali’s 209 area code. Originally, he met the Cesar Gracie team at Strikeforce Challengers: Kaufman vs. Hashi in 2010, where Medeiros made his organizational debut with a unanimous decision win in the middleweight division. The Skrap Pack liked his style, invited him to train with them and Medeiros has been with them ever since.

After three years with the Diaz brothers, Medeiros made his Octagon debut at UFC 159 as a lightweight with dangerous finishing ability wherever the fight goes.

“I feel like when I train, I train for every aspect,” Medeiros said. “When training with Nick and Nate, it really helps me get comfortable with offensive styles, whether they’re aggressive or more counter fighters. If they’re more grapplers and wrestlers, I’m training with Gilbert and Jake. The switching of an opponent may throw me off of my game plan in the beginning, but part of being a martial artist is adapting to the situation and making the best of it.”

At UFC 177, “making the best of it” for Medeiros meant securing a Performance of the Night bonus over his late replacement opponent Damon Jackson with a submission never before seen inside the Octagon. “Honestly, it was the first time I ever hit that submission,” Medeiros said of his reverse bulldog choke, which some have dubbed the “Yancy Yank.” A couple minutes into the second round, Jackson shot for a takedown, which Medeiros defended, and he then applied a guillotine choke. As Jackson tried to spin out of the hold, Medeiros locked in the new, awkward and tight choke to earn his first official UFC win.

“In the first round, I felt him panic when I had the guillotine in deep,” Medeiros explains. “The second round, he tried to take me down again, so I tried to set it up again. He just turned the wrong way and I went with it. I felt the choke was in deep. I wasn’t going to let go of that until the ref pulled me off (laughs). After I did that submission, I started to try to do it in practice. Sometimes they don’t turn the wrong way, but, sometimes the way I set it up, that’s the only way they can turn. It does work; you just have to know how to set it up. I’ve got great partners who help me collaborate with these jiu-jitsu moves.”

It’s not far from the first time the 10-2, 1 NC Medeiros has shown offensive innovation in his young Octagon career. In his previous UFC bouts against the seasoned talent of Yves Edwards and Jim Miller, Medeiros landed a deceptive and destructive slapping front kick, which clearly took some of the spark out of Edwards and marked Miller’s chest a raw pink in only a few throws. That signature move is a mix of Medeiros learning karate as a youth and his work with kickboxing coach Unko Doug.

“That’s actually from my kickboxing coach,” Medeiros said. “My kickboxing coach showed me how to throw it a little differently. His style of kicking. I thought it was really effective. I do it a lot against guys who like to punch. That’s probably my favorite type of kick. That’s my go to kick. It’s basically a front kick that I got from karate and kickboxing.”

Up next, Medeiros is heading into the Octagon for the fifth time this Friday to tangle with Joe Proctor at The Ultimate Fighter 20 Finale. The Massachusetts native has taken home back-to-back wins in 2014, including his most recent stoppage of Justin Salas in July. The TUF: Live alum is 3-1 inside the Octagon, with a fan-friendly, come forward and often style, much like his mentor Joe Lauzon.

“Joe Proctor is a really tough guy,” Medeiros said. “He looks like a real stand-up guy and is respectful. He likes to swing. We’re both aggressive fighters and that can bring out a Fight of the Night in both of us. He likes to strike, he’s a well-rounded fighter, and he comes from a great camp. I’m excited and I’m happy he took this fight. I really want to put on a show for the fans.”

On December 12th in Las Vegas, lightweights will collide as Medeiros aims for another bonus against Proctor. “My mindset is always the same: it’s to finish,” Medeiros said, making it clear that he isn’t there to outpoint his foes - he’s there to scrap. “I hate hearing the crowd ‘boo’ anything because I’m not there to win a match - I’m there to fight.”