Ahead of #UFC229, @YanaKunitskaya1 talked about what she learned from her first UFC fight and where she feels like she has an advantage over Lina Lansberg. pic.twitter.com/8Iuzslu4EU
— UFC News (@UFCNews) September 27, 2018

Yana Kunitskaya’s UFC debut in March was a dive into the deep end, as the former Invicta FC bantamweight champ accepted a short notice fight against UFC featherweight ruler Cris Cyborg, in the main event of UFC 222 in Las Vegas.

A significant underdog, Kunitskaya did land an early takedown and nearly took Cyborg’s back early on, before ultimately coming out with a loss to the world’s most decorated female fighter.

Six months later, she returns to the Octagon for a different challenge, taking on No.12-ranked bantamweight Lina Lansberg. It may be the fresh start Kunitskaya is looking for.

At UFC 229 on Saturday, October 6, in the same T-Mobile Arena where she stared down the most intimidating woman in the sport, Kunitskaya will give the UFC FIGHT PASS Prelims audience a taste of what she feels she’s really capable of.

“I feel like I did bad and there’s no excuses,” Kunitskaya said from training camp at the UFC Performance Institute. “There’s no pressure, especially after last fight. After that, my team was telling me nothing worse can happen to me and I’m okay. I’m still here.”

Back down to her natural weight class of 135 pounds and with a full camp of preparation time, Kunitskaya believes she has a full arsenal of weapons to showcase against Lansberg.

“I’m trying to be good all around,” Kunitskaya said. “Any game that she tries to put in this fight, I’m ready for this. Clinch, striking, wrestling, I have a plan for every situation. I’m ready for everything.”

Kunitskaya says she is not overlooking Lansberg, but the Russian-born fighter, 10-4 (1NC) in MMA, doesn’t see anything to worry about heading into the three-rounder.

“I think she’s very basic,” Kunitskaya said. “She’s tough, she can take punches, but I think I’m better. I don’t think her striking will be a problem.”

Echoing Kunitskaya’s confidence, Vegas odds have her at as a -175 favorite.

“All the people from our community who understand the level of fighters say I’m the favorite,” Kunitskaya said. “But I said if I’m not the favorite to bookmakers, I don’t care. I know I’m the favorite to me. I’d have to be a stupid person not to worry at all, but that doesn’t mean that I’m not confident. I’m confident for this fight.” 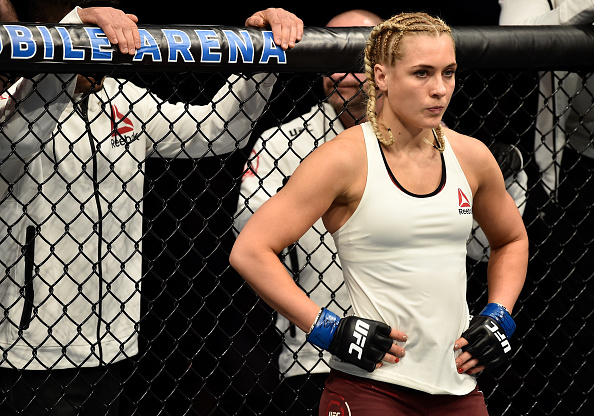