Bantamweight Contender Yana Kunitskaya Believes Her Bout At UFC 264 Could Set Her Up For A Title Shot Sooner Than Later
By Zac Pacleb, on Twitter @ZacPacleb • Jul. 8, 2021

As Amanda Nunes continues to reign over the bantamweight division, the question of “who is next?” persists. Currently, Julianna Pena is set to challenge the two-division queen, and although mixed martial arts is filled with amazing upsets regularly, few have shown the dominance Nunes has in the promotion’s history. That said, it’s up to the rest of the division to keep on lining up contenders, and eventually, as with all champions not named St-Pierre or Nurmagomedov, one of them will get the job done.

For Yana Kunitskaya, she feels like she is edging closer and closer to that conversation, and as she prepares to fight Irene Aldana at UFC 264: Poirier vs McGregor 3, she’s excited about the opportunity the bout presents her.

“I’m so happy the UFC always gives me an opponent higher in the rankings,” Kunitskaya told UFC.com. “It’s always a challenge for me. I like this fight because she’s a good fighter.” 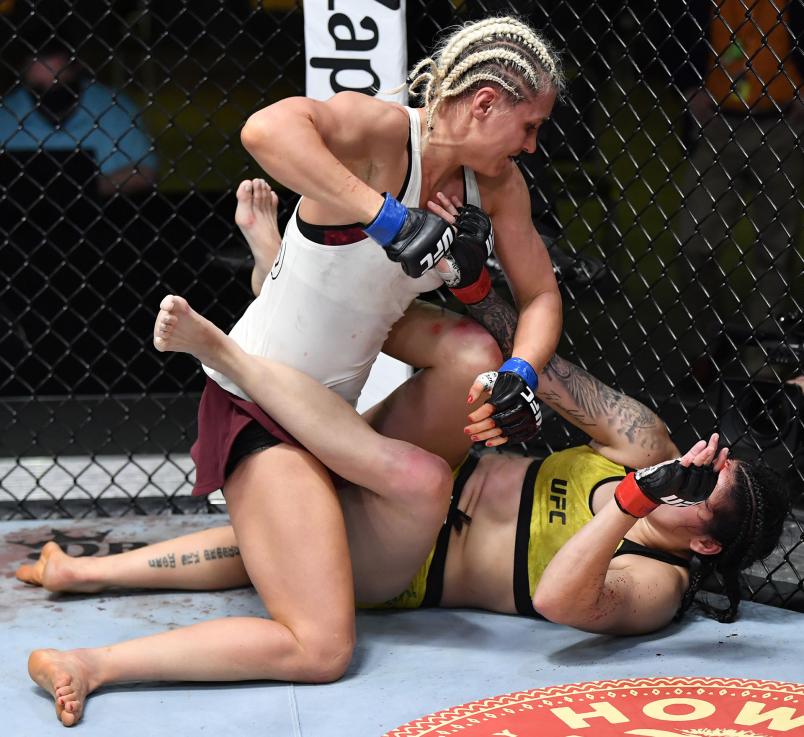 Yana Kunitskaya of Russia punches Ketlen Vieira of Brazil in a bantamweight bout during the UFC Fight Night event at UFC APEX on February 20, 2021 in Las Vegas, NV (Photo by Chris Unger/Zuffa LLC)

Aldana is coming off a decision loss to Holly Holm on UFC Fight Island, halting the immense momentum she gathered after knocking out Kunitskaya’s last opponent, Ketlen Vieira. Before the Holm bout, it seemed like Aldana was primed to challenge for gold next.

The loss pushed her down the ladder, but only slightly. Kunitskaya and Aldana are ranked fourth and fifth, respectively, and whomever comes out victorious potentially earns their way to a potential No. 1 contender fight.

Kunitskaya is intrigued with this fight against Aldana, whose strengths are in her standup, particularly her hands. That said, the Russian knows she cannot underestimate the Mexican’s ground game, where she shows solid defense to keep the fight where she wants it. To prep, Kunitskaya trained at American Top Team once again, where she and her partner Thiago Silva have helped each other prepare for their respective fights as of late.

"Every fight gets more exciting and more important, [fighting Aldana] is like a big step for me."@YanaKunitskaya1 talks about her high stakes bantamweight bout with Irene Aldana at #UFC264 🔊⬆️

“I want to say that I keep growing since I came here to ATT,” she said. “Thiago helped me a lot, so I feel like I grow every fight, and I will try to surprise her everywhere.”

She isn’t looking past Aldana by any means, but Kunitskaya did express interest in fighting former bantamweight champion Miesha Tate, who is set to make her comeback appearance later in July after nearly five years away from competition. It’s a bout that Kunitskaya wants, especially if she and Tate are both victorious this month.

However, Kunitskaya knows she has a tough test in Aldana, who boasts nine finishes in her 12 professional victories. She isn’t allowing herself to think too deeply in terms of anticipating what the fight will look like, though, and perhaps that’s among the reasons why Kunitskaya is on the precipice of challenging for a UFC title once again.

“It’s so hard to do prediction because we are both well-rounded,” she said. “Maybe we are going to do a standup game. Maybe it will go on the ground. We’ll see.”