The July 16 main event bout between Yair Rodriguez and Brian Ortega was one of the most anticipated in a summer full of enticing headliners. However, it would end prematurely when Ortega suffered a shoulder injury midway through the first round after Rodriguez attempted an armbar. The circumstances rendered what was a fun night of fights a little anticlimactic, but Rodriguez walked away from the night with his hand raised and as the likely No. 1 contender in the featherweight division.

For Rodriguez, who was sympathetic toward Ortega in the aftermath, the result was the one he wanted even if it didn’t come the way he hoped. He found himself in the winner’s circle again, which is always the goal.

“I don’t think it’s weird,” Rodriguez told UFC.com. “A win is a win. The submission attempt was there, and it’s the name of the sport. I’m happy.”

With featherweight champion Alexander Volkanovski seemingly past his chapter with former champ Max Holloway, Rodriguez seems like the logical next challenger. “El Pantera,” along with Josh Emmett, are the only two top-5 featherweights coming off a win.

Not only is Rodriguez well-positioned, but the nature of his fight’s early ending is that he didn’t suffer any real damage or injuries – a rare turn of events for the all-action Mexican.

Where We Stand: Featherweight Division | July 2022

Part of that enjoyment included going to Dallas, Texas, to support countryman Brandon Moreno in his interim flyweight title bout at UFC 277 against Kai Kara-France. Rodriguez expressed all his passionate support for Moreno when “The Assassin Baby” ended things in the third round with a body kick that would make Rodriguez blush.

Also in town that week was Volkanovski himself, who was supporting Kara-France.

Rodriguez said he and Volkanovski had crossed paths before but never spoke. In Dallas, however, the opportunity was there at the fighter’s hotel, and the two shared an amicable conversation. Rodriguez wished Volkanovski a speedy recovery from his hand injury he suffered against Holloway, and Volkanovski returned the pleasantries.

“(Volkanovski) is a nice guy,” Rodriguez said. “I was friendly. I never go to look for a fight. We fight for money. We don’t fight for – pride, yeah, but money, too. I’m not going to fight him for free. We’re just having fun. He has a broken hand, so I’m not going to go up to him. It doesn’t make sense.”

Rodriguez expressed his interest in fighting Volkanovski in Australia and welcomed the idea of fighting in that potentially hostile environment.

“It wouldn’t be the first time that I go against all the crowd,” he said. “It’s just a part of the game. What truly matters is what’s going on inside the cage and how you approach it. I’m ready for that.” 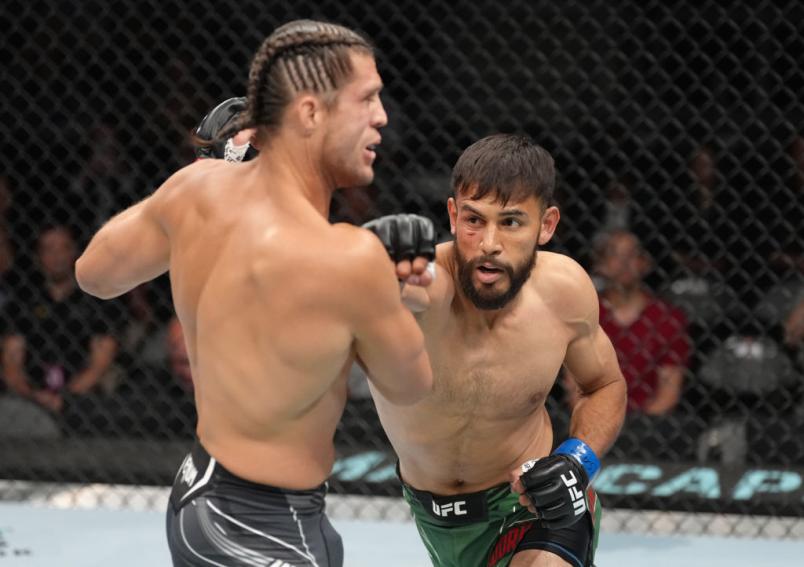 Whether the UFC makes its return to Australia for the first time since October 2019 is uncertain. What is a little more certain is Rodriguez’s position as the top contender at 145 pounds. His fight against Holloway, although a loss, cemented his quality as a future title challenger and potential champion. Even though he didn’t get to show much more of that quality against Ortega, Rodriguez has the track record and highlight reel of a man who is worthy of a title shot.

All that considered, Rodriguez said he is going to take advantage of the time Volkanovski’s hand needs to heal as well as his own clean bill of health. Rodriguez isn’t a stranger to waiting – he fought five times in the last five years – but no opportunity is more worth patience than a potential first shot at UFC gold, and he is fully aware of that.

“I think I’m in a good spot right now,” Rodriguez said. “I’m knocking on the door for the title. I’m not going to take anything less than that.”