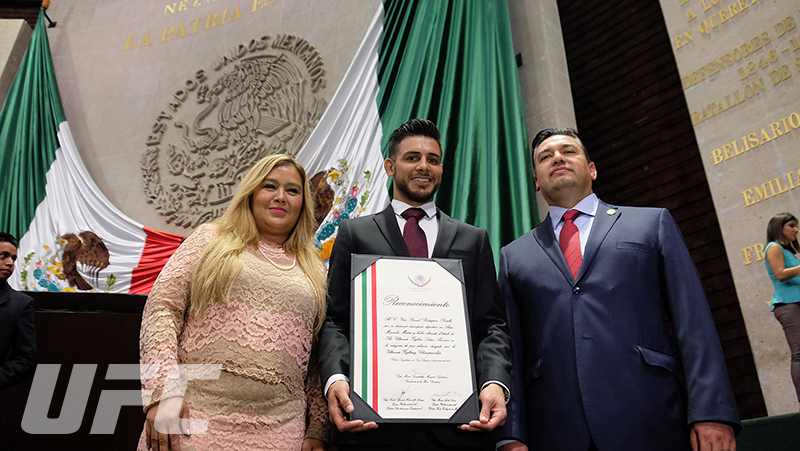 Rising UFC featherweight Yair Rodríguez was officially recognized by the Mexico’s Congressional Chamber of Deputies on Thursday as an outstanding and exemplary Mexican athlete.

"I am very excited -- it is important for me and for all Mixed Martial Arts athletes in my country to feel the support of one of the highest levels of power," said Rodriguez, 24, a native of Parral in Chihuahua. "My family and I are very proud.

“This is a recognition for me and for all those who have helped me during my career in one way or another. For my parents and my brothers … I am already a champion and they always make me feel this way."

The No. 7-ranked featherweight in the UFC, Rodriguez attended a special ceremony before the entire plenary (debating) chamber at the historic San Lazaro Legislative Palace in Mexico City, where he was proclaimed, amid thunderous applause, as a remarkable Mexican who honors his country inside and outside the Octagon.

The recognition by Mexico’s Congress is an incredible affirmation for Rodriguez and his team, as well as for the entire community of martial arts practitioners, in a country where MMA is still a young sport.

More than one Mexican deputy approached Rodriguez to express his admiration and to talk about his fights, which, like any fan, they have witnessed and cheered.
Afterward, Rodriguez returned to Chihuahua with his family to spend a few days with loved ones and friends. What’s next for “El Pantera”?

“Wait for the call of the UFC to know my next opponent,” he said. “I hope it will be soon and it should be a Top 5, because I am in the seventh position (in the rankings) at the moment.”