CHECK OUT THE FULL RANKINGS HERE

Yair Rodriguez continued his perfect run in the UFC with another victory over the weekend. “El Pantera” out-lasted Alex Caceres in a ninja-like, 25-minute spectacle in the main event of Fight Night Salt Lake City. 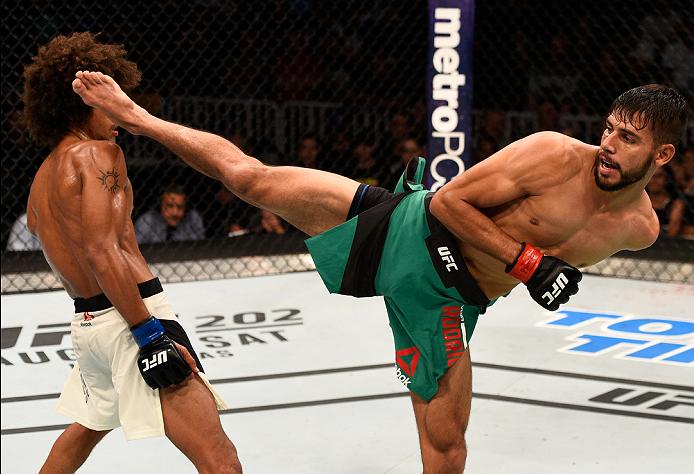 On Tuesday in the official UFC rankings release, Rodriguez jumped two spots to No. 11 in the featherweight rankings as a reward for his performance. The Mexican prospect now turns his attention to the Top 10 of the division as he’ll likely get a serious step up in competition next time inside the Octagon.

A quick browse through the rest of the rankings this week will unveil a monster shakeup throughout the majority of the divisions.

Jon Jones, Frank Mir, Brock Lesnar and Lyoto Machida were all pulled from the rankings because of potential USADA violations. This is a result of a new policy in the UFC rankings system: Starting with this set of rankings, fighters who have been provisionally suspended due to a potential USADA violation will be removed from the rankings until the matter has been adjudicated. Suspended fighters are ineligible for inclusion in the charts until they are reinstated.

Notable debuts in the rankings because of the new procedure are heavyweight super prospect Francis Ngannou and light heavyweight Misha Cirkunov, with both being ranked No. 14 in their respective divisions.

In the middleweight division, Yoel Romero was voted up 11 spots to No. 4 as he continues his rise back up the rankings after recently being made eligible once again. Thiago Santos replaced Lyoto Machida on the 185-pound rankings.