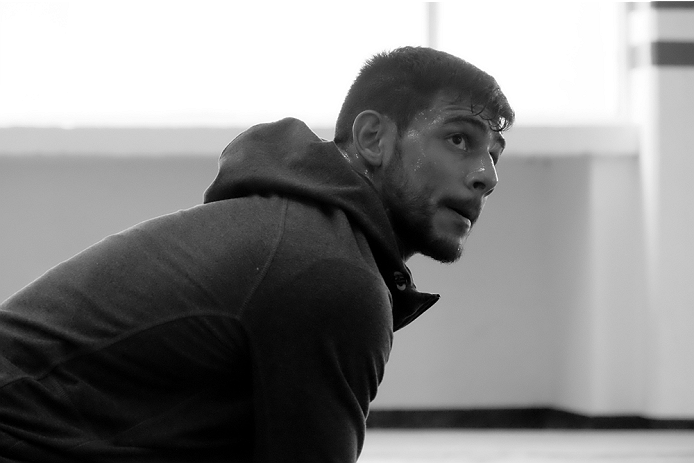 “Life moves pretty fast. If you don't stop and look around for a while, you could miss it.”

The words from Chicago’s Ferris Bueller couldn’t be more fitting for the life of another young man making his home in the Windy City, UFC featherweight Yair Rodriguez. Just 23 years old, the native of Parral, Chihuahua, Mexico has gone from unknown prospect to Ultimate Fighter Latin America to main card fighter in his home country. It’s something he couldn’t have imagined when he turned pro in 2011.

“Not really, but I'm so happy that this whole process has been so fast,” he said.

It’s the great thing about being young, the idea that the sooner things happen the better. Most of the time, that rush doesn’t work out. But in Rodriguez’ case, it seems like everything has happened when it was supposed to, even if – unlike the fictional Bueller – there is little time for Cubs games or rides through the city in a sleek sports car.

Instead, it’s basically all work all the time for Rodriguez, who has been living in the U.S. for almost a year.

“Of course it’s hard to be away from your family and friends, but this is a sacrifice for my dreams,” he said, fresh from the biggest win of his career last November, a decision victory over Leonardo Morales that earned him the TUF LATAM title. As a bonus, Rodriguez, now 5-1 as a pro with three finishes, got to make his Octagon debut in Mexico City, though he’s a bit understated when talking about that night, which marked the UFC’s first show in Mexico.

“Everything was good, and the turnout was as expected,” he said. “It was a great experience and the fight went as expected.”

It was a history-making effort for Rodriguez, as he and Alejandro Perez became TUF LATAM’s first two winners, but for the Team Velasquez member who won the season’s featherweight title, it wasn’t cause for a victory tour or long vacation, just a return to Chicago and the gym to get ready for his next assignment.

“Nothing has changed,” he said. “I keep training hard and looking forward to my biggest goals. The only thing is that I can help my family in an economic way more than before. They are happy with this (his success). They support me so much and they are the most important to me.”

There’s nothing more admirable than to see a young man fighting not for glory or fame or a bigger afterparty than his peers, but for the things that really matter. And if you’re going to stereotype a Mexican fighter, this is the right direction to head in, as many of Rodriguez’ countrymen in combat sports, whether in boxing or mixed martial arts, have the same goals as “El Pantera,” whose heroes aren’t on stage, screen, or in the ring. They’re his parents.

So when Rodriguez faces fellow hot prospect Charles Rosa this Saturday in the same Mexico City arena where he won his first UFC bout, it’s more than just a fight.

“I’m ready for war,” he said. “That is what I hope to have with this awesome warrior. No pressure.”

You could almost imagine those words being uttered by the great Mexican battlers of the past: Julio Cesar Chavez, Erik Morales, Ricardo Lopez, Salvador Sanchez, and so many more. And one day, expect to see some Mexican MMA fighters on that list.

“I think that MMA is building its own names and in the future they will be recognized like them,” said Rodriguez, who doesn’t hint in the slightest about being in that group. That’s just not the way he carries himself. Humility and hard work. Those are his keywords. And that’s why he may join the greats eventually. That’s not something on his radar at the moment though.

“I’ve been training hard, and I’m taking my career one fight at a time,” he said.