Yair Rodriguez and the Start of Something Big

"I did not know for sure what was in this for me, but when I decided to give it all for this sport I really wished to excel and be recognized." - Yair Rodriguez 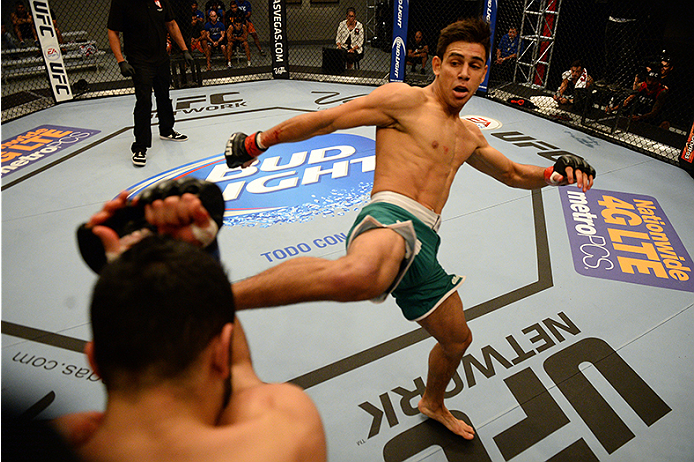 Not to get too melodramatic, but hearing TUF Latin America featherweight finalist Yair Rodriguez say that in MMA he “found everything” is a pretty big deal. It’s a reminder that to a 22-year-old on the brink of a dream-fulfilling moment, sports can transcend anything else on any given night.

There’s a feeling that it’s going to be like that in Mexico City this Saturday when Rodriguez and several of his countrymen compete in the UFC’s first event in Mexico.

“It’s something hard to explain,” Rodriguez said through a translator. “It is something very important for me and the people that have supported me.”

A five-year veteran of the sport, the Parral native may only have five pro fights, but he showed that he was mature beyond his years on TUF LATAM, submitting Humberto Brown and stopping Rodolfo Rubio to punch his ticket to the finals against Nicaragua’s Leonardo Morales.

“It was and always will be a unique season,” he said. “It was spectacular for all the fights and the way we got along inside.”

The 21-year-old Morales is the last man standing for Team Werdum, putting the heat on Rodriguez to make sure Team Velasquez closes out the competition as the winners in both of the show’s divisions. Yet despite being on different teams, Rodriguez knows what his foe brings to the dance on Saturday.

“He is a lefty, very fast, strong, and a smart fighter,” he said, and given the talent level and ages of both young guns, it’s not out of the realm of possibility that they could meet again in the future. And just the fact that we’re discussing the future prospects of someone who hasn’t even set foot in the Octagon yet shows the upside of a fighter who looked at Mexican icon Julio Cesar Chavez as an example of what was possible in the world of combat sports.

“He proved you can accomplish greatness, as long as you don’t look back,” Rodriguez said of boxing’s “El Gran Campeon,” and to follow in Chavez’ footsteps, he had to leave home, winding up in Chicago where he trains with respected coaches Mike Valle and Israel Martinez.

“It has been very important for me to train in a foreign country,” he said. “I think there are a thousand things to learn anywhere you go, and even though there is much to show there’s still much to learn.”

That goes not just for the new Mexican contingent of UFC fighters, but for the fans in Mexico who will be out in force this weekend to cheer their countrymen on. Some have called UFC 180 the start of an MMA revolution, and that could very well be accurate.

“It’s growing very fast,” Rodriguez said of MMA in Mexico. “Now people are informing themselves about this and even more people are practicing it.”

Yet while change in the scene is coming for the nation as a whole, for Rodriguez, winning The Ultimate Fighter will be even bigger.

“My life would change immensely,” he said. “This represents my goals and my dreams. It would mean being able to help my family too.”

Family. Country. Dreams. All key aspects in what makes Yair Rodriguez the fighter and man he is today. He admits he didn’t know this would be the result of his efforts years after he first put the gloves on, but now that he’s here, he’s not about to leave without making an impact.

“I did not know for sure what was in this for me, but when I decided to give it all for this sport I really wished to excel and be recognized,” he said. “So the fans should expect the best of me; I’m going to fight with my heart if God lets me. It is going be war.”