Wrestling Is Paving The Way For Sean Foley

Sean Foley Is Sharpening His Skills At Rider University And Mulling The Possibility Of Competing In Combat Sports After He Steps Away.
By Walker Van Wey • Jan. 26, 2022

The average person has likely never heard of New Jersey’s Rider University or many other schools its size, but Sean Foley and the rest of the Broncs are on a mission to make sure no D-1 wrestling schools forget the tiny school in Mercer County.

Unlike football, basketball and many other collegiate sports, NCAA wrestling has never been a sport dependent upon blue chip schools producing the vast majority of talent.

Sure, Penn State, Iowa, Oklahoma State and others may be the first schools to pop into mind when the subject comes up, but with the East Coast grit and inspiration of Frankie Edgar and Jim Miller in your backyard, it’s not unheard of for a school like Rider to pop up into the Top 25 rankings.

“We’re a smaller school, but we’re tough,” said Rider University senior Sean Foley. “We’re known for our grit and our mental toughness and not getting scored on easy and fighting for every position.”

Foley began his wrestling career in middle school, and he would go on to not only wrestle in high school but set the benchmark for wins as the first wrestler to have his hand raised more than 100 times in a season.

Could Foley have gone elsewhere to wrestle? It’s possible, but with Rider University’s reputation mirroring his personality and the potential in the coaching staff and wrestling team, Foley stayed at home in New Jersey and settled in for a hard-fought, wild ride.

“[Rider University] is known for just being gritty wrestlers,” Foley said. “We just had an All-American take second in the nation and he said it himself, he had big schools look at him, but he got denied and Rider took a chance on him. It was just nice to see that if you trust the process and you buy into the program you see results.”

There was no better example than when Foley and the rest of the Broncs upset the Gable Steveson-led Minnesota Golden Gophers. 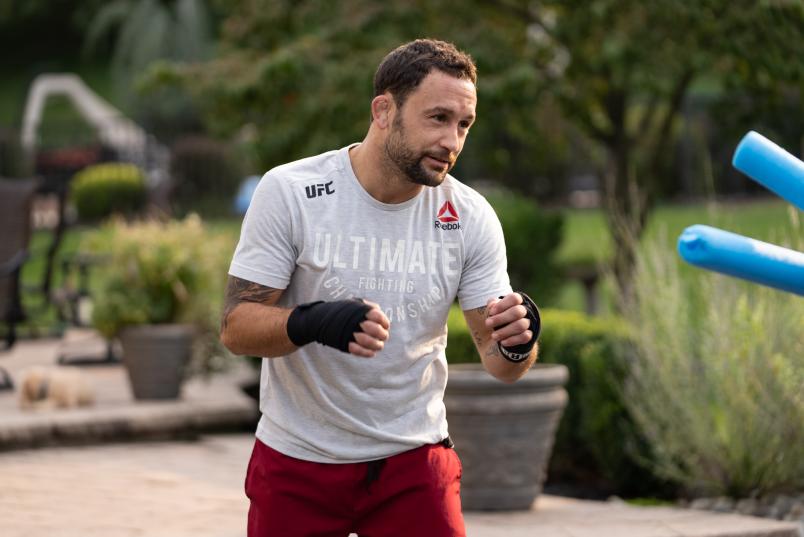 Frankie Edgar prepares for his bantamweight matchup with Marlon Vera at UFC 268: Usman vs Covington 2 in Millstone, New Jersey on September 14, 2021. (Photo by McKenzie Pavacich/Zuffa LLC)

In fact, it turns out that in addition to having a combat sports appreciation for New Jersey fighters, Foley is an avid UFC fan with the heart of Frankie Edgar and an appreciation of another MMA fan-favorite featherweight.

“I like Chase Hooper a lot,” Foley said. “I like that he’s an unassuming fighter. He’s really good on the ground and he’s getting better. He’s super young, too, so he’s got a lot of potential and he markets himself really well. His social media is really good, as well as him going with Ben Askren and doing Funky Family, that’s really clever, interviewing Jorge Masvidal, all of it. He’s really good and he’s moving up; I’m impressed by him and he’s got a fan in me.”

Two years since I got to interview Masvidal for @UFCFightPass💪🏻😤 pic.twitter.com/VIQPMde3eo

“I like anything grappling really,” Foley said. “Submission Underground, Polaris, EBI, anything grappling, really. I do want to be a mixed martial artist and get into striking, but I would be kidding myself; I’m truly not there yet. In terms of grappling, I would do EBI and I’m going to start training jiu jitsu locally, so definitely keep an eye out on that.”

At 125, there’s little risk of his idols becoming his rivals when Foley does make the transition. But is there a chance we may one day get a Chase Hooper/Sean Foley joint attack of a UFC media day?

Fingers are crossed, and time will tell!

Catch all the best combat sports under the sun by signing up TODAY for UFC FIGHT PASS!