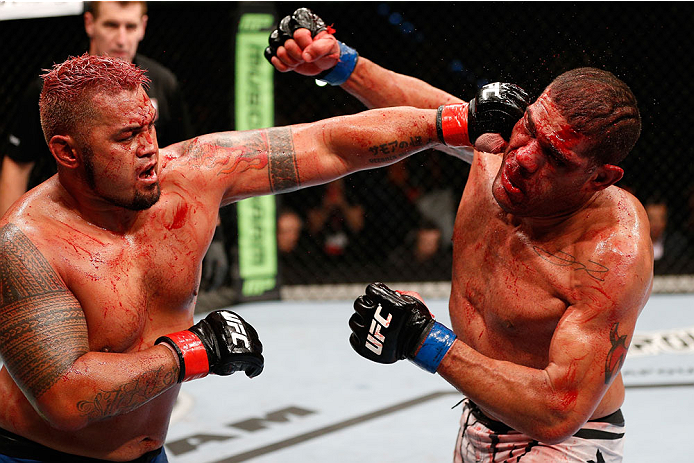 In a year of classic fights, heavyweights Mark Hunt and Antonio “Bigfoot” Silva delivered one of their own in the main event of UFC Fight Night at the Brisbane Entertainment Centre in Brisbane, Queensland, Australia, giving fans 25 minutes of blood, guts, skill, and will before the judges rendered a majority draw verdict that was probably the only decision that no one is likely to complain about.

There wasn’t much action until the second minute of the bout, with Hunt just missing with a wild haymaker and Silva landing a hard right that Hunt didn’t blink at. Midway through the round though, another right from Silva got Hunt’s attention as it scored a flash knockdown. Once standing, Hunt continued to stalk as if nothing happened, with Silva looking to pick his shots carefully while keeping his guard high. With a minute left, Silva sought a takedown, but Hunt defended well, even though the two remained locked up against the fence momentarily.

Hunt got a little busier in the second, but Silva’s defense and offense was solid throughout. With 2:20 left, Hunt cracked Silva with a right hand that buckled the Brazilian’s knees slightly, and he went back to the right moments later with success as well. Yet Silva’s biggest weapon soon proved to be his kicks to the leg, one of which had Hunt limping and changing his stance in response.

With Silva aiming for the leg again, Hunt caught one of the kicks and used it to score a takedown. Silva got back to his feet quickly, but it showed Hunt to have more than a few tricks up his sleeve. As the round progressed, Hunt kept the pressure on, sending Silva to the seat of his pants with a big right hand. Hunt tried to finish with ground strikes as the packed house roared, but Silva was able to make it to the end of the round.

Silva came out swinging in the fourth, and Hunt eagerly fired back before the two locked up against the fence. After breaking, Silva kept throwing his right before looking for a takedown, but it was Hunt who ended up with the takedown and top control. After some ground and pound from Hunt, the two rose and traded flush rights before engaging in some wild exchanges. And just when it looked like Hunt was starting to fade, the “Super Samoan” unleashed his own assault. But when the fight hit the deck, Silva got into the mount and threw punch after punch, bloodying Hunt in the process. Hunt wouldn’t give in though, making it to the bell and setting up a fifth and final round.

Hunt showed that he still had plenty of fight left in him as the final round commenced, ripping off lefts and rights to the head that visibly hurt Silva. And though the Brazilian was bloody and exhausted, he kept marching forward as Hunt tried to potshot his way to victory. With 2:44 left, referee Steve Perceval halted the bout momentarily to have the doctor check Silva’s cuts, and after getting the green light, the war continued. Remarkably, both fighters kept swinging, and soon Silva rallied. Then it was Hunt’s turn to take the edge and you wondered just how the two stayed upright. Finally, the two locked up against the fence in the final minute, but after a very brief respite, they went at it again until the bell intervened, drawing an appreciative and well-deserved ovation for what was a fight that won’t be forgotten anytime soon. 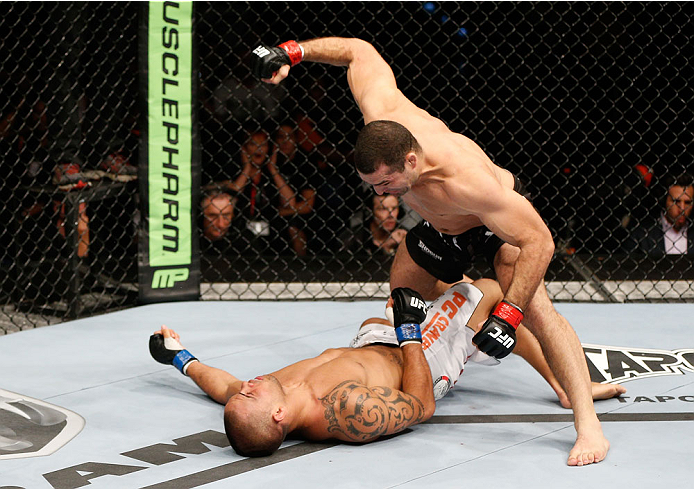 Written off by many before tonight’s co-main event, former UFC light heavyweight champion Mauricio Rua silenced the doubters in true “Shogun” fashion, knocking out Penrith’s James Te Huna in the first round.

Looking more focused than he had in recent losses to Alex Gustafsson and Chael Sonnen, Rua used the Octagon real estate well and threw off a Te Huna takedown attempt before unleashing a short left hook that Te Huna walked right into. Te Huna fell hard to the canvas, with referee Josh Sharp halting the bout at the 1:03 mark.

After some patient early moments, Bader dropped the 41-year-old Perosh with a right uppercut 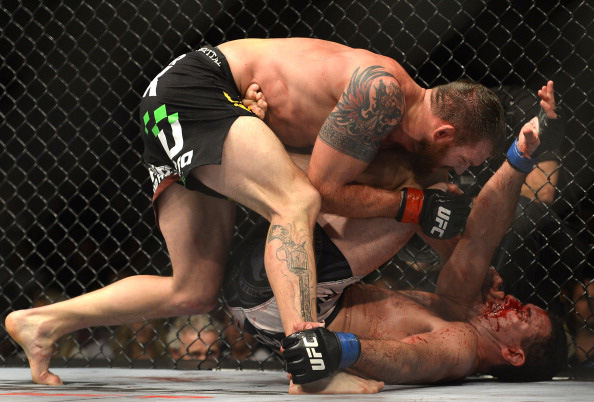 and looked to be seconds away from victory before the Australian rose to his feet. Another uppercut hurt Perosh moments later, but the veteran drilled Bader with a right hand that got the American’s attention. A slip by Perosh gave Bader the opening he needed though, and the former Ultimate Fighter winner pounced with a ground and pound attack. Again Perosh found a way to survive and he got back up, shooting off strikes at his foe. In the final minute, Bader got a takedown, and his ground assault bloodied Perosh, capping off a huge round.

Round two could have easily been scored 10-8, as Bader dominated on the mat from start to finish with a relentless ground and pound attack, and nothing changed in the third, as Bader kept the pressure on for the final five minutes to improve his record to 17-4. With the defeat, Perosh falls to 14-8.

In a huge reversal from his August win over Nikita Krylov, Perth’s Soa Palelei was on top of his game against Pat Barry, using a ground and pound blitz to stop “HD” in the first round.

Palelei sought the takedown immediately, but Barry defended it well. Moments later though, a Barry knee attempt resulted in a successful takedown for Palelei, and with three minutes left, “The Hulk” got into the mount position and fired off a series of flush ground strikes, finishing Barry off. The time of the stoppage was 2:09. 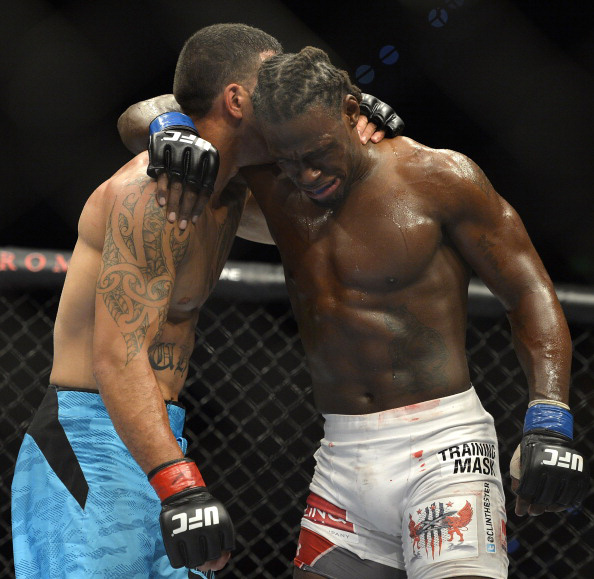 Andrews met a premature end when Andrews was forced to withdraw due to injury after the second round.

Hester (9-3) was bomb slinging at the start, jarring Andrews with a couple flush rights early. 1:15 in, Andrews responded with a takedown, and the two scrapped on the mat, Andrews trying for a guillotine choke and Hester escaping and getting into the top position before rising to his feet in the final minute. The Gold Coast product would finish the round with another takedown though, getting a roar from the crowd.

After scoring well with his punches early in the second, Hester scored with the takedown and fired off ground strikes, bloodying his foe in the process. With 1:20 left, Andrews (18-6, 1 NC) got back to his feet, but he definitely looked worn out by the ground assault. It wasn’t fatigue though, but a shoulder dislocated when he threw a right hand, and while he made it through the frame, the fight was understandably halted between rounds, giving Hester the TKO win. 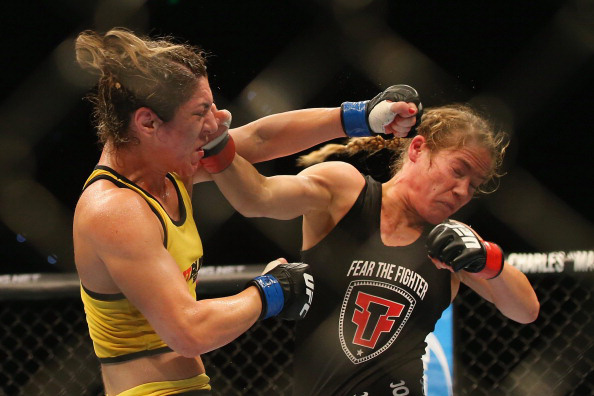 Kedzie dominated the first three minutes of the first round behind effective kicks and counterpunches, but Correia began to find her range in the fourth minute, landing with hooks to the body and head before doing some solid inside work against the fence.

The second round was a near copy of the first, with Kedzie maintaining control for much of the frame, but in the third, Correia upped her work rate, using her strikes to force an exchange that allowed her to get Kedzie to the mat. Yet just when it looked like Correia was about to turn the tide, Kedzie exploded to her feet and got back to business, with solid defense keeping the Brazilian from landing a fight-altering strike, even if it wasn’t enough to earn the judges’ nod.