"The strategy involved is the most amazing part. It’s also very mentally challenging for anyone to enter the ring or the Octagon." - Sam Chinkes 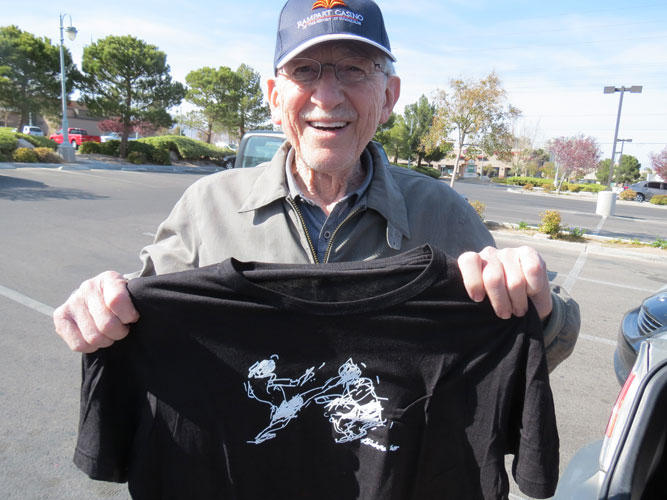 Fill in the blank: The oldest UFC fan I have ever met is __ years old.

You can stop scanning your brain. I got ya beat.

I’m confident that the man who would set the record for oldest UFC fanatic lives right here in the fight capital of the world, Las Vegas.

He is a native New Yorker and World War II Army veteran. He has worked extensively as an ad exec, painter and sculptor. And, in his spare time, his daring choice of television programming has prompted his wife of 62 years to ask him on many a night: “Why are you watching that again?”

“Cuz’ it’s the best thing on television!” he responds in an affable tone, citing humor as paramount to his long-lasting union.

The name of this unique superfan: Mr. Sam Chinkes. Born in 1923. 88 years young. And living proof that although the UFC impressively reels in the male 18-34 demographic, and has hooked a surprising number of female fans on the sport as well, that the elder statesmen among us are not immune to the allure and artistry of a cagefight. After all, a fascination with fighting is in every human being’s DNA.

Since the early 1990s, Chinkes said, he has been faithfully watching UFC. Back when Royce Gracie put UFC on the map with mind-blowing victories over 250-pound Goliaths.

“My wife doesn’t care for it,” Chinkes confided, “but she has her own TV. I watch (UFC) whenever I can and most of the time I find it’s the best thing on TV … except for some old movie favorites of mine. I watch movies about the mafia all the time. I mean, I’m from New York. But I’ll still watch UFC instead of my favorite movies because I’ve seen the movies many times before. I make sure to catch the statistics before all of the fights. I’m crazy about the announcer, Bruce Buffer. He’s terrific! Very dramatic. He’s a real pro.”

Track and field was Chinkes’ forte in his prime, though he was always smitten with the sport of boxing. As a child growing up in the Bronx, he and some friends would test themselves on a makeshift punching bag made from a potato sack. They donned gloves and lightly sparred under a fire escape stairway.

“We never hit each other hard – though I saw stars one time,” Chinkes reminisced.  “I’m not a fighter. I’ve never been in a fight in my life. But if the UFC were around when I was younger, I would have liked to have coached a fight. I’m absolutely sure I could have done it. I would understand my fighters, be a good strategist. I was a survivor of World War II, so I think in those terms.

“So I’ve always liked the sport. It’s athletic. There’s an art to keeping your balance, hitting someone 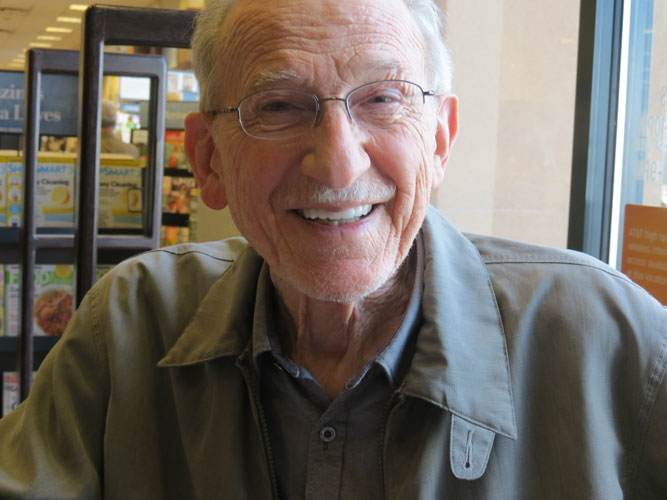 and avoiding getting hit. The strategy involved is the most amazing part. It’s also very mentally challenging for anyone to enter the ring or the Octagon.”

I ask Mr. Chinkes to name his favorite UFC fighters.

“The Canadian guy … what’s his name? … GSP,” he replied. “The heavyset guy who was beat recently… the heavyweight champ … Brock Lesnar! Yeah. He’s a guy I got to like for awhile. But then I saw that as tough as he is, as big as he is – he can’t take a punch. Am I wrong?”

Good stories, like $100 bills, aren’t supposed to miraculously fall from the sky and into your lap. Cosmic luck caused mine and Mr. Chinkes’ paths to cross. I was reading alone at what seems like the world’s last bookstore when a gentleman sat down at the table next to me. For as long as I can remember I’ve had a soft spot for most of my elders, particularly those of upbeat energy and the glass-is-half full cheer. The laid-back but self-assured stranger beside me fit the bill. I asked what he was reading and the conversation flowed easily from that point on, as if I had known this man for many years.

He seemed super-sharp, showing off a very agile mind.

“You must read a lot,” I presumed.

“As a matter of fact, not all that much,” he countered.

That veered us in to more interesting turf: He’d been married 62 years to the same woman. 62 years! How many things, other than food and water and a toilet, do you think you’ll enjoy a 62-year relationship with?

I’ve always been fascinated by seniors, by the wisdom they’ve accrued that could save the rest of us the suffering of wisdom by Trial & Error. I’ve always been irked by what seems, in my opinion, a society that treats seniors as second-class citizens. There are other cultures where seniors are treated with reverence. Here we tend to treat them with deference, as if they are all senile, all something none of us wants to be.

And I’ve always, always, always been fascinated by people that can make their marriage work for a long time. 30 years. 40 years. 50 years. And not suffer the marriage, but enjoy it. A divorcee myself, I perk up when marriage marathoners share their secrets and advice.

“You want to know what it is?” he tells me. “It’s humor. We’re always making each other laugh. I used to think that the younger years would be the best. But the truth is, our older years are the best. We laugh more now than ever.”

He asks me to guess his age. I concentrate on his face and build. I’ve always possessed a whacky (and incredibly useless) skill of being able to guess how much people weigh within two or three pounds. I get it from my wrestling background. People’s ages stump me more, because some people age prematurely and others so gracefully.

Stumping me makes him smile.

We talk some more and somehow or another we start discussing television programming. I live in a four bedroom home and have 20-inch television that I have never, not once, turned on or watched. My instant friend watches his fair share of television.

“You know the best thing on television these days?” he asks rhetorically. “It’s UFC.”

I didn’t instantly perk up. I didn’t make the connection. UFC? That must be three initials that stand for some senior citizen organization. 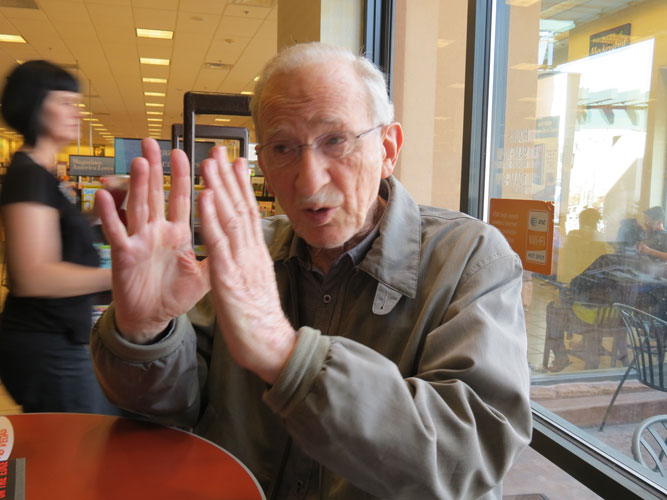 He couldn’t be referring to the UFC I know and love – Ultimate Fighting Championship.

But just to be sure … “What do you mean by UFC? You don’t mean cagefighting UFC, do you?”

“Yeah, the cage fights! I love watching that!”

And there you have it. Apparently every demographic on the planet is susceptible to the UFC, which is one of the few places left on earth that is truly a meritocracy. Unlike almost every other business, UFC isn’t a who-you-know industry. It isn’t about who has the most money, or the best lawyers, or the prettiest mug. It’s mano y mano. May the best man win. Sam Chinkes “gets it,” reminding me – reminding all of us – that we should learn and evolve and stay open-minded for as long as we are here.

I walk him to his car. He wants to show me something. He opens the trunk of his car. There are dozens of black shirts in a box. He holds one up: It is a sketch of one fighter front kicking another to the face. Reminscent of the breathtaking technique that Anderson Silva used to knockout Vitor Belfort.

“I drew that sketch right off the top of my head in seconds,” Chinkes said.

Sam Chinkes gave me one of his shirts. And I thought so highly of this extraordinary fan, and his love of UFC, that I wrote a story about him.

Sam has never been to a live UFC event. The UFC and myself are going to change that very soon.

Do you know a UFC fan who breaks the mold, or are you one? Email a picture and description to fanpic@ufc.com to be considered for a future feature!