When you consider that Jack Robinson was practicing jiu-jitsu moves in the hallway outside of his hotel room after the conclusion of his run in the World Surf League’s MEO Pro Portugal event on Monday, it’s no surprise that he chose to wear the name of UFC strawweight champion Rose Namajunas as the Aussie and his WSL peers celebrated International Women’s Day.

“Rose is a part of the new generation of athletes,” said Robinson. “Even my wife, she's like, 'You always watch Rose.' And I just like the way she goes about her business. She's super humble, and I like what she does.”

Julianna Peña: Letter To My Younger Self | International Women's Day

Robinson isn’t alone in appreciating the efforts of “Thug Rose” in and out of the Octagon, as two of his WSL tour mates, Hawaii’s number one ranked Barron Mamiya, and California’s Nat Young also decided to honor Namajunas during the Portugal event. 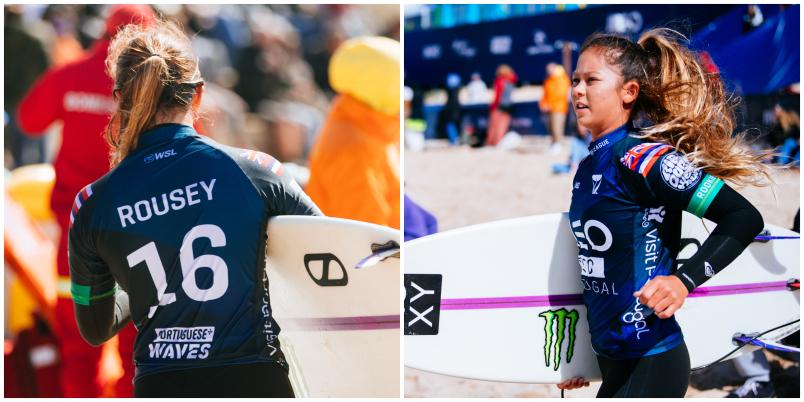 Bettylou Sakura Johnson of Hawaii prior to surfing in Heat 1 of the Opening Round at the MEO Pro Portugal on March 3, 2022 in Peniche, Portugal. (Photo by Thiago Diz/World Surf League)

“It is a huge honor to be able to inspire so many other athletes, and especially at such high levels,” said Namajunas. “It is confirmation to me that it pays off to stay true to who you are, no matter what pressures there are that try to make you into someone you are not.”

But Namajunas wasn’t the only UFC fighter to be chosen by the athletes of the WSL, as Hawaii’s Bettylou Sakura Johnson and Australia’s India Robinson chose to rep none other than UFC Hall of Famer Ronda Rousey on their jerseys this past weekend.

It’s a testament to the reach of women who made their mark in a sport that wasn’t even in the UFC a decade ago, and also a visible sign of how far women in sports have come. Someone who has had a front row seat to that evolution is the WSL’s Head of Competition, Jessi Miley-Dyer – not just an executive with the league, but a former standout surfer in her own right.

“When I competed, I was on our championship tour for six years and so many things have changed,” said Miley-Dyer. “And part of why I wanted to come work in the league was because when you're a competitor, especially in the women's division, you work really hard for the things that you have and you value your victories and career wins so much. I won a single championship tour event and I won like ten thousand dollars, and I thought I was killing it, I thought I had so much money. (Laughs) So, for me, personally, if you told me in that moment when I won ten grand for the biggest career victory I was ever gonna get, that surfing would be doing all these amazing things around gender equality and have such a leadership position for women and have a campaign like International Women's Day, I would have been like, 'Oh yeah, whatever. No way.'”

She laughs, but the fight for equality has been a hard one, and one that the UFC and WSL have embraced. 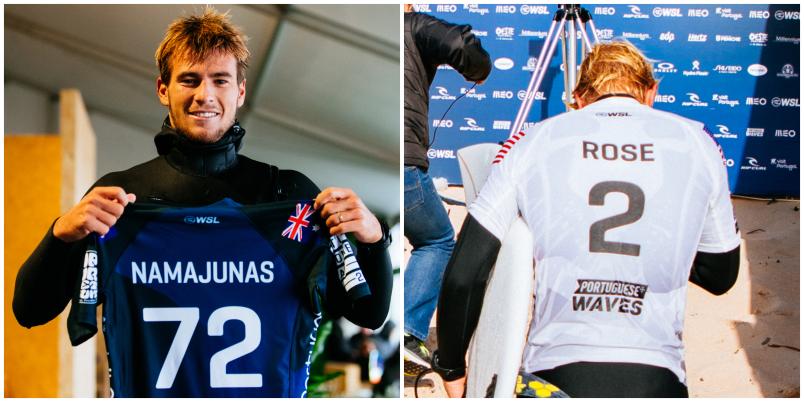 “One of the hallmarks of our league is equality,” said WSL CEO Erik Logan. “It is a word that we actually have been focused on for quite some time. In fact, in 2018, we announced that we would be paying men and women the same and we've been doing that since 2019. So, equality has been a huge part of what this is and, because of that, the heroes in our sport on the women's side have been extraordinary, and what we've committed ourselves as a league to do is to elevate those icons through honoring them on days such as this. In addition, celebrating the great women we have and then drawing to a much wider swath of inspiration, not only for the women, but also for the men. So we felt it really important that we include the men and women in celebrating International Women's Day.”

In addition to Namajunas and Rousey, the 54 Competition Tour surfers, including the legendary Kelly Slater, chose several renowned athletes across a wide range of sports to represent on their jerseys, including Billie Jean King, Sue Bird, Michelle Kwan, Bethany Hamilton, Naomi Osaka, Chloe Kim and Serena Williams. As for Brazil’s Jadson Andre, he chose Miley-Dyer. Not surprisingly, the whole program was embraced by the surfers.

“They were super excited, and it was great because we allowed them to pick a female and then put it on the back of their jersey,” said Logan. “And we did these big packages through the broadcast, because we broadcast for four days, and did all this content and told all the stories about all these different, amazing women that were chosen. And they transcended surfing. Some of our world champions chose the first world champion for women, some of them chose different people that influenced in surfing, but the one that sort of jumped out at me was Barron Mamiya, who, going into Portugal, was number one in the world, and the back of his jersey said 'Thug Rose.' Rose was also selected by one of our great, great surfers in Jack Robinson, and by Nat Young. Also, quite a few of our other female surfers actually picked former UFC star Ronda Rousey. The range of everything was from Tyler Wright, our two-time world champion, who had Sue Bird, and everything from snowboarding, track and field, and Billie Jean King and Naomi Osaka. It was so amazing to see all of our men and women really embrace this idea of what this day was intended to do, to elevate these amazing stories.”

“It's super cool,” added Miley-Dyer. “I've seen Ronda fight in person in Vegas and I was pretty stoked because she's been such a strong figure for UFC and for women everywhere. The coolest thing that stands out for me when I see some of our men and women picking fighters like Ronda and Rose is that the idea that when people think of a UFC fighter or someone in MMA, they think of these two women and what I want when people think of a surfer is for them to also think of a female surfer; to think of different people throughout surfing and that's the standard in pop culture. So for our men and women to be picking a fighter and be automatically thinking of two different women, I think that's epic and it shows that they're getting the recognition as not only strong women, but as icons of the sport for both men and women.” 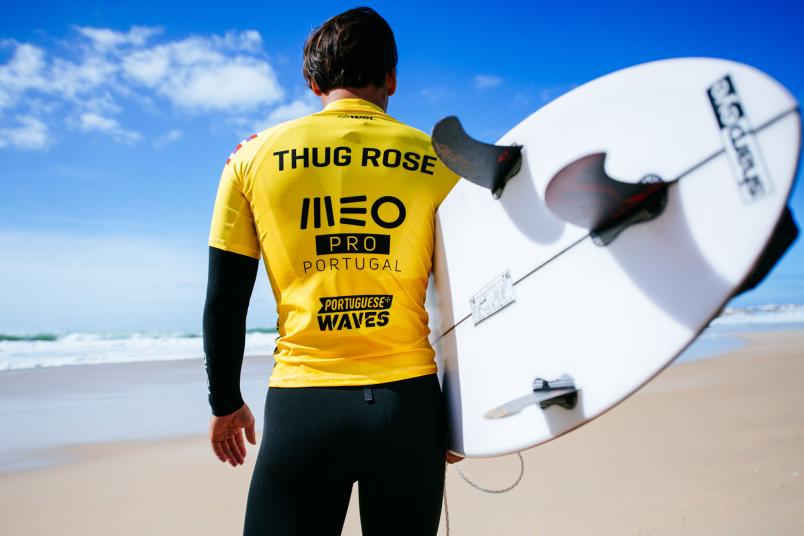 Barron Mamiya of Hawaii prior to surfing in Heat 9 of the Opening Round at the MEO Pro Portugal on March 4, 2022 in Peniche, Portugal. (Photo by Thiago Diz/World Surf League)

As for Robinson, who has spent some time on the waves with UFC bantamweight contender Marlon “Chito” Vera when he’s in California, his pick for IWD was a no brainer.

“I love the ones where she (Namajunas) went against Joanna Jedrzejczyk and the Zhang Weili fights,” he said. “I like even before the fight when she was warming up, saying, 'I'm the best.' I like her. And I've watched a lot of other women's sports, like tennis, and I appreciate Serena Williams and all these women, but there's something with UFC and mixed martial arts, in general; it's such a tough sport. They have to be the hardest-training athletes, mentally too, to overcome anything, and it's incredible. I just admire it and it's really amazing to see what they overcome and go through.”

As the kids say, game recognizes game, and while no one would confuse an MMA fight with surfing the waves, the athletes on both sides put in endless hours of training, face adversity, and then aim to perform when the pressure is at its highest. That’s why the respect goes both ways.

“The diversity of choices that our surfers made is truly extraordinary and when we look at all the different fields and the number of athletes that were chosen, just in the UFC alone, it certainly says that there's such a common thread for a lot of our surfers and a lot of the athletes in the UFC, and it's something that I love,” said Logan. “And the second thing is, is that what I do love about how far we've come is that this feels like such an important conversation and all we simply did was provide a platform for our league and all our athletes ran in wanting to do it. That was so exciting. It wasn't something where this is something you have to do or you're told to do; we provided the platform and the opportunity, and they really stepped up. It was one of the most moving campaigns I've seen us do as a league.”