The World According to Costas Philippou

"I’m alive, I have a great life, and I’m happy. If it stops today and I don’t get to fight again, I won’t lose sleep over it." - Costas Philippou 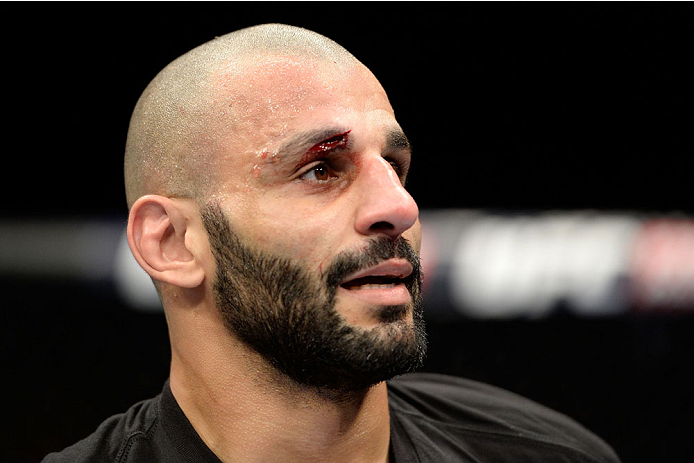 You hear a lot of things in the fight game, especially when you’ve been around it long enough. Yet few have as healthy an outlook on life and fighting as UFC middleweight contender Costas Philippou. The way he sees it, this isn’t his destination, but just a stop on the journey.

“Everybody sees it in a different way,” said the New Yorker, who takes on Lorenz Larkin in Saturday’s UFC Fight Night co-main event in Cincinnati. “A lot of the fighters that I saw so far, they put all their eggs in a basket and they go ‘this is my chance, this is the only thing I want to do with my life,’ and 99 percent of them end up five, six years later going nowhere in the sport, and they find themselves at 35, 40 years old with no career, no money, and they’ve got to start from zero. Everybody believes that they’ll be that one percent. I’m not that guy. I always see the worst case scenario in everything. I don’t know if that’s a good thing or a bad thing, but it’s been working for me, and I take it as it comes.”

You could almost call the 34-year-old an accidental prizefighter. A Golden Gloves boxer who fought pro three times, Philippou got disillusioned with the sport but still wanted to stay in shape. That’s when mixed martial arts entered the picture.

“It was just something to do to keep me busy,” he said. “I figured let me go try this MMA thing. I got bored with boxing and the same things over and over, and I was going through a phase in my life where I was bored with everything, so I tried MMA. I said if I’m going to run and go hit the bag, I might as well get into the cage and spar. I’m sparring already, I might as well get a fight. That’s how it started. I was winning and everybody kept telling me, ‘keep going, keep going.’ And all of a sudden somebody offered me money to do it. Why not? And that’s how things go with me. I don’t do things like everybody else. I never put much thought into things like fighting in the UFC or being the champion. And I still don’t think about those things. I do it because it because it’s something to do now. I know it sounds weird because everybody says ‘I want to be champion, I want to be on TV,’ but I don’t really see it like that.”

Philippou has been on TV, a few wins could put him back in the race for a title shot, and hey, he’s even in the upcoming EA Sports UFC video game. But that doesn’t mean he’s thinking past Saturday night. In fact, he admits that he’s thought about walking away from the sport, especially around weight cutting time.

“This is when you start doubting yourself and wondering if this is really worth doing,” he laughs. “I don’t mind the pain and the workouts and everything; it’s when you take the food away from me that it’s not fun anymore. Then I torture everyone around me, and you wonder when it’s enough. I don’t want to be the guy that’s 40-45 years old who still fights for a living and diets, has mood swings, has to travel, and gets punched in the face for a living. I’m not that guy.”

So if you have the impression thus far that Philippou isn’t a guy who sweats the small stuff – like wins and losses – you would be half right. The Cyprus native wouldn’t be in this sport if he didn’t love winning and hate losing, but he can take his recent defeats to Francis Carmont and Luke Rockhold, which snapped his five-fight winning streak with a grain of salt.

“It’s impossible to have a good night every single fight,” he admits, but he has every intention of getting back on track against Larkin. Will it be the striking battle fight fans are hoping for though?

“No, everybody’s gonna wrestle with me,” he said. “It’s MMA. It used to be, ‘I’m a tough guy, you’re a tough guy, you’re a striker, I’m gonna stay here and strike and prove that I’m better than you at your own game.’ It’s not like that anymore. People see your weakness and they want to find it and expose that. Everybody knows that my advantage is striking and I don’t want to call my ground game my weakness, but I definitely think he’s going to try and take me down.”

He pauses, then chuckles.

“Luke Rockhold stood with me and kicked my ass, so hopefully I’ll show up and have a good night.”

It’s this blunt honesty that makes Philippou both a compelling figure and a fan favorite. Simply put, he’s showing up to fight, and if he’s on, he’s one dangerous middleweight. Even if he’s not on, he’s going to keep fighting until it’s over. That’s really all you can ask. But if you’re going to go further, why not ask where this approach to fighting and life comes from.

“Experience, life,” he said. “I’m on my own since I was 15 years old, and I honestly believe I have the experience of a 70-year-old and I’m only 34. You have to take things as they are and find ways to keep going. My motto is expect the worst, and nothing can go wrong after that. It’s been working for me so far. I’m alive, I have a great life, and I’m happy. If it stops today and I don’t get to fight again, I won’t lose sleep over it. I used fighting to kick start my life. It just happened that it worked out. I’m making some money and I don’t know how long it’s gonna last, but it’s been fun so far, so you go as far as it takes you.”