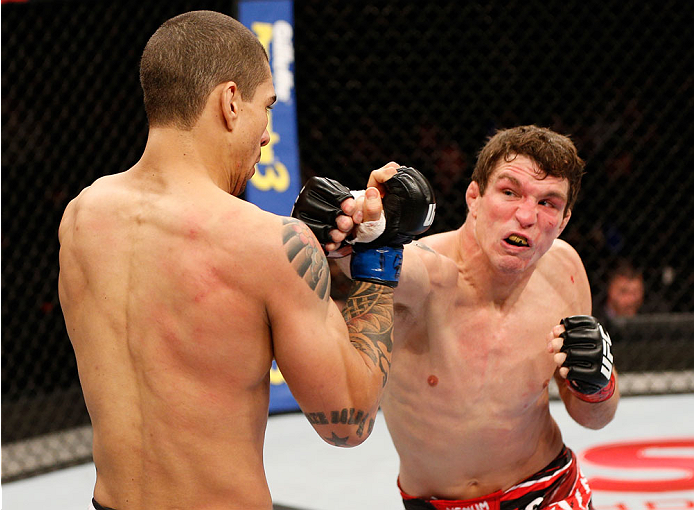 Darren Elkins is one of the good guys in the world of mixed martial arts, but he did deserve whatever he got when he recently sent a picture to his friends and family back home in Indiana.

“Everybody was mad at me when I sent them a picture of me in a tank top and told them ‘this is tank top weather’ while they were getting 12 inches of snow and everything was shut down,” he laughs. “They were not very nice about it.”

Nor should they have been, but after a lifetime of winters in Portage, the 31-year-old featherweight contender has earned his literal place in the sun in Sacramento, California, where he now trains full-time with the renowned Team Alpha Male squad.

“I've had a lot more time to click on some of the stuff this time,” said Elkins, who did a short camp with the team before his last win over Robert Whiteford in October. “The last time I thought I made some adjustments, but it was just three weeks. This time it was a full eight weeks, and I just clicked really well with these guys. They accepted me with open arms and I put in the hard work. Everybody knows I'm not the best athlete, but I work hard and I find ways to get it done and learn. And switching up the training has re-energized me.”

It’s also been a nice change up for the Elkins family, as his wife and kids are in Sacramento with him, enjoying the weather and giving Elkins the peace of mind of having his family there with him as he prepared for Saturday’s UFC 196 bout against Chas Skelly.

“I do feel like I've really turned the corner,” he said. “I've had a great camp, I didn't have any injuries, and I’m training the mindset of it and changing some techniques and adding speed. Plus, those guys at Alpha Male love to train and I love to train. We get in there, put in a hard day's work, then I come home, spend time with the family and go there again. I'm always looking forward to training all day long and the energy is great there.”

That work ethic is what has made Elkins one of the top featherweights in the world. He’s not flashy, he doesn’t have a host of highlight reel knockouts or submissions, but more often than not, he finds a way to win, going 8-3 in the Octagon since moving to the featherweight division in 2011. And when it comes down to it, winning is really all that matters.

“Some people might not like my style, and I'm trying to make it more exciting, but at the end of the day, I work with what I have,” Elkins said. “I'm a great wrestler, my cardio wins a lot of fights for me, and I have that mental toughness. Most people are better athletes, but I can beat them with my mental toughness and cardio. If I went athleticism against athleticism, I'd lose a lot of these fights in the UFC, but I feel that when it comes down to a fight of pure guts, that's what I get most people on.”

The upcoming bout with Skelly is intriguing for that reason, because both are near mirror images of each other. Skelly has more finishes, but Elkins believes he can outlast “The Scrapper” and add another notch to his belt.

“I see a lot of the common things,” he said of the matchup with Texas’ Skelly. “Obviously he's a good wrestler and he looks to get to the ground and I like to get to the ground. We both have a jiu-jitsu game. Striking is probably going to play a role in this and I think cardio as well, because whenever you fight me, you better bring the cardio because that's something I always have.”

In other words, pack a lunch, because Darren Elkins isn’t going anywhere. Not on Saturday, and not in the foreseeable future either.

“I've been in the UFC a lot longer than most people have,” he said. “I've had a long career in the UFC so far, and I don't plan on leaving anytime soon either.”