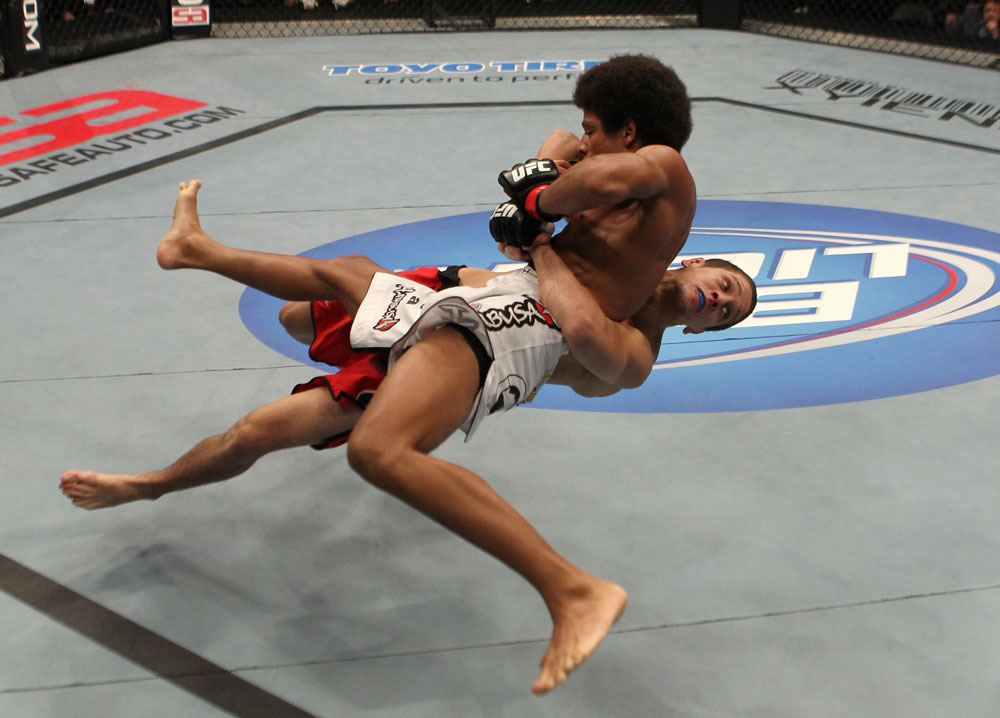 It’s very rare that a UFC fighter walks away from a winning performance filled with 10-8 score cards in their favor like that and thinks to himself, “I need to get better”. It’s quasi-understandable that this particular combatant was disappointed in hearing the judges’ input at all, considering all previous nine bouts of Jimy Hettes’ young career were each won by submission well before time had expired. For the featherweight dubbed by some “Judo Jim” and by others “The Kid”, every Octagon appearance is a learning experience, even the ones he dominates.

“I was definitely humble in the victory,” tells Hettes. “Just because at this caliber of opponents, you are going to take the win however you can get it. A lot of the people are saying all the stuff I did good or correct, but I've watched the fight a couple times and there are a lot of times that I was sloppy. I'm grateful for that because it showed me what I need to go back and work on to step my game up to another level.”

At 25 years old and 2-0 in the UFC, the pride of Kingston, Pennsylvania is simply not satisfied with his one-sided drubbing of The Ultimate Fighter season 12 alum Nam Phan at UFC 141 last December. Entering into his UFC debut five months earlier, Hettes was undefeated, hadn’t seen a third round, and was racking up sub victories left and right, including armbars, heel hooks, and anything ending in “choke”. Hettes’ first time in the Octagon was on Facebook, on the undercard of the UFC Live event in Milwaukee against another TUFer, Alex Caceres, which had a familiar ending for “The Kid” in the form of a win by rear naked choke in the second. While all fights in the UFC entail pressure, Hettes’ next bout was against the well-traveled Phan and was on the big stage of a pay-per-view.

“I tried not to over think the whole situation,” reveals Hettes. “It was my first time on pay-per-view. I just tried to simplify everything and keep telling myself it was just another fight. Nam, he has a reputation of being a real tough individual. He has a black belt in Brazilian jiu-jitsu and he has boxing experience. In my head, I tried to tell myself it was just another fight. It was against a tough opponent, but I had prepared for Nam and I didn't want to over-hype him in my own head. Just let my body do what had to be done that night. My first time against Alex Caceres, I felt real nervous. The second time when I fought Nam, I felt more at home and more relaxed. I didn't think about it too much and it felt like another practice and everything just flowed.”

The long and short of this matchup was Hettes’ relentless takedowns (scoring 11 of 20), guard passes (9), and a never ending barrage of ground and pound (close to 300 strikes thrown) for all 15 minutes. “No matter what round it is, I try to put the forward pressure on and keep implementing my game,” says Hettes, who believes the bout is a testament to Phan’s toughness and never give up spirit that he made the prospect continue to work for all three rounds. “Nam had such good boxing, and the whole training camp it was in my head if I let up for any one moment one of his punches could make it a real short night. When it came time to fight, I just knew that I couldn't give him the opportunity to really get his punches going or get into a rhythm. There were plenty of times he could have given up or taken the easy way out, but he made me earn every second of that.”

Up next for Hettes is a showdown in Toronto, Canada at UFC 152 against one more TUF alum in Marcus Brimage. Originally, he was scheduled to face Brimage’s castmate Steve Siler at UFC on FX in June, but an injury sidelined the Hettes hype train. As with many of the injuries befalling the UFC roster, Hettes’ was from over-training and not allowing his body the rest and recovery time it needs. Now, he is preparing for his bout with “The Bama Beast” smarter, and is excited to get back to scrapping inside the Octagon.

“It was the first time I had been injured in practice,” explains Hettes. “I tore the intercostal muscles in my ribs and the cartilage along with it. It was kind of a wakeup call for me because I was training three times a day every day. I would be sore, but I was never too bad. After that, I really had to take a step back and assess what I was doing. So now, I take one day off a week and do a few other things to try and maintain a healthy level while training. The day the doctors said I was cleared to come back to training was the same day I was supposed to actually fight Siler. I've been training full-time for a while now. The UFC gave me the offer of fighting Marcus Brimage. He's a tough opponent. He puts on exciting fights, so it should be an exciting night.”

Generally speaking, these two southpaws have diametrically opposite gameplans heading into the cage, with Hettes favoring the ground and his opponent, Brimage, looking to trade knockout punches standing. The 27-year-old prospect from American Top Team has secured back-to-back decision wins in the Octagon since leaving the TUF house, engaging in a three round war against housemate Stephen Bass in December and then in a less than entertaining contest with Maximo Blanco at UFC 145. Brimage is strong, explosive, and hits hard, which should prove to be a solid test for Hettes.

In preparation for Brimage, “The Kid” splits his training week to week between two gyms in his home state of Pennsylvania, and then he crosses the state line to work with a famous crew of UFC fighters in New Jersey. In PA, Hettes is at Swoyersville Submission Wrestling and World Class Boxing; in NJ, Hettes battles with Frankie Edgar, Ricardo Almeida, Tom DeBlass, and Nick Catone as well as Brimage’s TUF teammate Akira Corassani, just to name a few.

As mentioned, Hettes loves training so much he gets hurt overtraining, whether it’s on the ground, where “Judo Jim” has a brown belt in judo and a purple belt in Brazilian jiu-jitsu, or in the standup, where he is working with Sean Diggs to add more boxing and Muay Thai skills to his oft-observed “goofy” style. Whatever area of the fight it may be, Hettes’ natural determination is to be in the gym and putting in the work to make himself better at it, which may help explain this undefeated streak, these submissions, and this bright future at featherweight ahead of him.

“When I first started and I made the decision to be a pro, the only reason I made it was because it allowed me to train jiu-jitsu more,” reveals Hettes. “The only way I could train jiu-jitsu multiple times in one day is if I went pro. If I was working a job, I could only train once a day, so I went pro so I could train more judo and jiu-jitsu. To think, that's where I started. I never really told myself when I started that I wanted to be in the UFC or wanted to be undefeated. I think that's all a product of what I've been training and training so hard. As much as I appreciate the fans, at the end of the day, it is just me fighting someone else. You can never underestimate your opponent and believe your own hype. I just consider myself lucky to be a part of this sport. I don't think that I'm better than anyone and I don't think I've reached my full potential. It just makes me hungry. I wake up every day just eager to train and learn from the best.”

On September 22nd at UFC 152, two emerging talents coming off successful freshman years in the UFC will travel north of the border to clash in the cage. “Wherever I fight, it's not like I get to enjoy it and see the sights; it's a business trip for me, it's just another place to fight,” affirms Hettes, who takes a monastic approach that hard work pays off in the cage when he takes on Brimage. “Hopefully, fans see that I like to do what I’m doing. I'm not trying to impress anyone or just trying to make money. I just like to fight.”

Whether Hettes wins a Submission of the Night or another tough decision, he will take it, go back to the gym, and make the strides to improve upon it simply because he likes to.