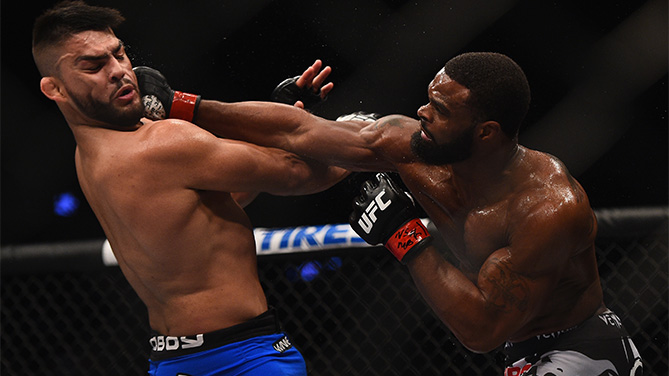 Much of the drama around the UFC 183 co-main event between welterweight contenders Tyron Woodley and Kelvin Gastelum centered around Gastelum weighing in at 180 pounds for the 170-pound bout on Friday. Unfortunately, that remained the extent of the drama on Saturday night, as Woodley won a close, but uninspiring, split decision at the MGM Grand Garden Arena.

There was little notable action in the opening round, with the crowd refusing to be shy about letting the fighters know their displeasure.

After more circling in the opening stages of round two, Woodley stunned Gastelum with a right hand and a fight finally broke out, both fighters becoming more aggressive. Woodley’s right was the most effective weapon, and Gastelum didn’t have anything in his arsenal close to matching it.

Gastelum got more aggressive in the third, knowing that he needed a big round to turn things around, and while he got cut over the left eye, the Arizonan was landing his share of shots. It wasn’t enough to hurt or finish Woodley though, leaving “The Chosen One” to pick up the victory and keep himself in the title race. 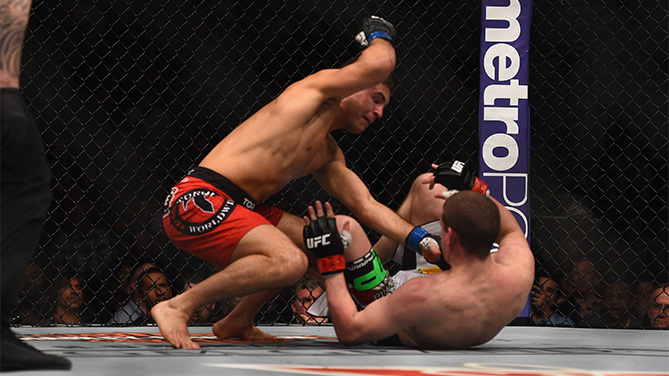 Long Island lightweight Al Iaquinta made his case for a move from prospect to contender, as he collected his second big name victim, following up his November win over Ross Pearson with a second-round stoppage of Joe Lauzon.

Iaquinta began the fight looking for takedowns, but came up short twice. Lauzon’s response was a series of hard shots to the head, drawing a rise from the crowd. Iaquinta bounced back nicely, throwing combinations and landing hard leg kicks. In the final minute, the bout went to the mat, with Lauzon going for a guillotine choke briefly, but after standing, Iaquinta ripped off more combinations before getting stuffed on a takedown before the horn.

The back and forth action continued in round two, but midway through the frame, Iaquinta drilled Lauzon with a straight right and wobbled him. The right hands kept coming as Lauzon staggered but wouldn’t go down. But after several more hard shots, referee Marc Goddard wisely stepped in at the 3:34 mark. 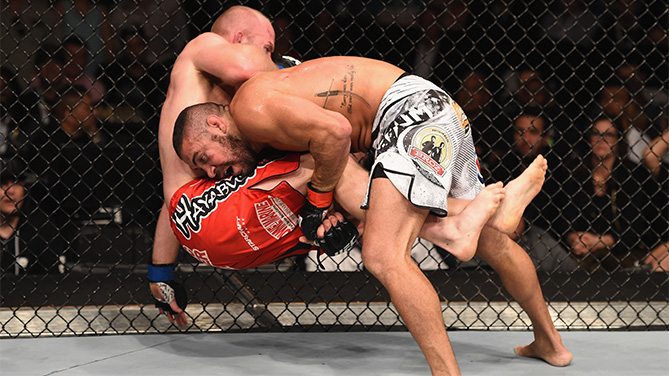 Thales Leites had to dig deep to get his eighth straight victory, but the middleweight contender finished in style for the third consecutive bout, submitting Tim Boetsch in the second round of an exciting 185-pound battle.

There was plenty of good back and forth action in the opening frame, and even though both fighters had their moments, Boetsch’s punches had more weight behind them, and he had Leites hurt late in the round.

Boetsch (18-8) kept landing bombs in the second, and he looked to be close to finishing the Brazilian in the third minute. But the resilient Leites (25-4) was able to get a takedown, and moments later, he sunk in an arm triangle choke. Boetsch was in deep trouble, but he escaped. The second time Leites sunk it in though, it was lights out for “The Barbarian,” with the end coming at 3:45 of round two.
> Watch: Thales Leites Backstage Interview 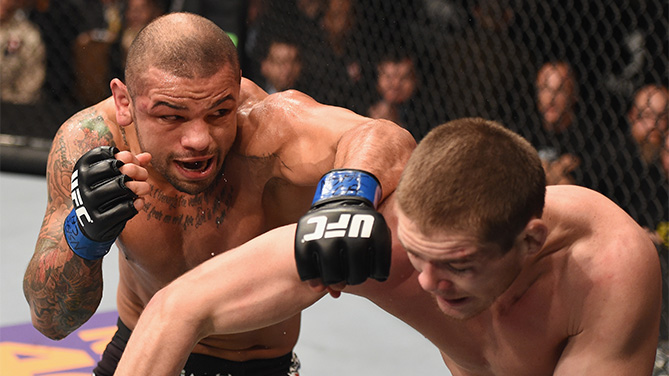 Longtime welterweight contender Thiago Alves looked like he was in for a rough night against Canada’s Jordan Mein in the main card opener, but after landing a devastating body kick in the second round, the “Pitbull” finished his opponent for the victory in his first bout since last April.

The first round could not have gone much better for Mein, as he tagged Alves almost at will while barely getting touched in return. Mein nearly finished the bout in the final minute as well, jarring the Brazilian with vicious elbows at close range.

The second round was an entirely different story though, as Alves caught Mein with a right kick to the body that dropped Mein hard to the mat. Alves pounced, and after a blitz of strikes, referee Herb Dean halted the bout at the 39-second mark.