Woodley wants to prove worth in high-stakes title fight 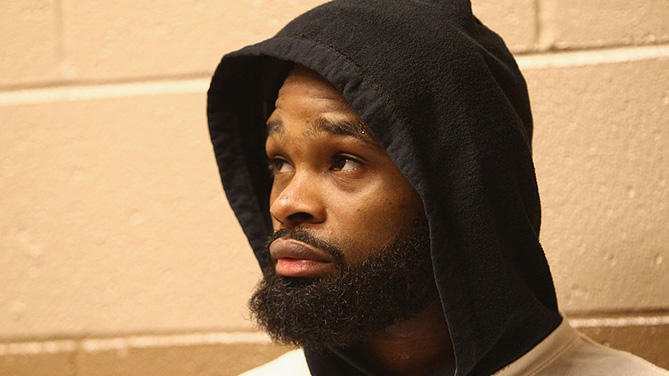 One could argue the stakes have never been higher for Tyron Woodley, considering all that’s ahead of him: a return to the Octagon after a year-and-a-half layoff; his first UFC main event; a chance to capture a UFC championship belt while facing one of the most intimidating fighters in the sport.

Daunting, except to Woodley. For him, it’s just another day in the office.

“I’m really trying to downplay the moment as much as possible, not look at so much social media, not worry about the odds, not worry about making the event, and really just focus on the skill set it takes to win this fight. Then, after the fight, I’ll want to look back and I’ll try to enjoy the moment and the process, all the things that I had to overcome just to get to this point. I’ll sit back for the first time in my career and try to soak it in.”

As a 15-3 professional, “The Chosen One” has been on the path to this moment for a while – with four wins in his last five trips to the Octagon. But the wait has been longer than expected after a potential title elimination bout with former welterweight champion Johny Hendricks was nixed on the eve of UFC 192 last October due to a medical issue for Hendricks.

It’s not an ideal situation for a fighter to be forced to wait, but that never bothered Woodley.

“Things happen for a reason,” Woodley said. “I think the time when you’re actually not fighting is the difference maker. If you’re sitting there, eating Tootsie Rolls and getting fat, and not training, and not working on your skill set then yeah, it’s going to be tough for you to just jump back in there, but if you’ve been watching films and reading books, you’ve been training.”

Hailing from St. Louis, Mo., Woodley is more than just “a fighter” or “a TV analyst.” He uses his stature to bring awareness to social causes, like those that affected Ferguson, Mo. Winning on Saturday not only would elevate him professionally, but also gives him a bigger platform to spread his positive message.

“Yeah, I haven’t really been shy about talking about social issues,” Woodley said. “I’ve been at over 30 schools in St. Louis, primarily in Ferguson, at school districts talking to kids. It’s the place where you actually can make an impact for change. I can’t go to a 34-year-old adult and tell another man why he should be like me. I can’t do that; I can try, but it would fall on deaf ears. What I’ve done is that I’ve tried to impact the youth and I’ve tried to lead by example. Obviously we all make mistakes and we all mess up. But I think it’s important that people see that transparency and see that I’m not perfect.

“I will win this fight. I will use a positive platform to address issues … It’s time that an athlete starts speaking out on some of these issues and starts having a voice. I’m reading and making sure I have my details right, but athletes are scared to talk about stuff now. Muhammad Ali was never scared. He stepped out there and he spoke about what he believed in.”

But to reach that point, he needs to get a result Saturday night, against champion Lawler, after a year-and-a-half wait. It’s not an ideal situation with the stakes so high, but the road has been too long for Woodley to shy away now.

“It’s never about losing right now. It’s not an option for me. I’ve come too far and I put in too much work,” Woodley said. "I’ve got too many people that are banking on me, too many people that have put in the time that are leaving their families. I look to seize the moment and I look to do the right thing with the exposure that I get from it. I’m going to make this a new me.”