Woodley KOs Lawler in one to take title 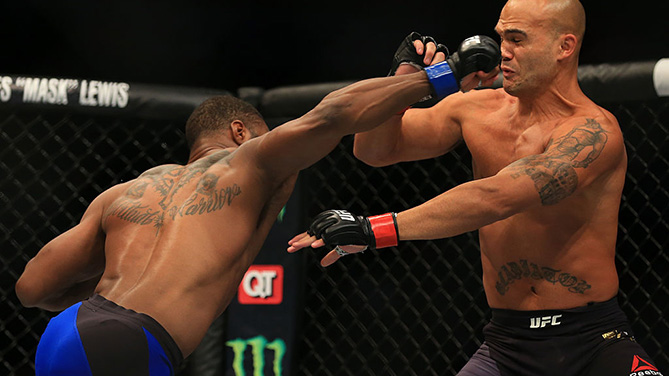 Tyron Woodley delivers a right hand to knock down opponent Robbie Lawler in their welterweight championship bout during the UFC 201 event on July 30, 2016. (Photo by Daniel Shirey/Zuffa LLC)" align="center" />Tyron Woodley waited a year and a half for his shot at the UFC welterweight title, and on Saturday night at Philips Arena in Atlanta, he made that wait worth it, knocking out Robbie Lawler in the first round to become the UFC’s new 170-pound champion and the ninth man to hold the division’s undisputed belt.

“I was in the back and I was relaxed,” Woodley, who scored the fastest finish in UFC welterweight championship history, said. “I’ve been extremely relaxed. I was nervous and I wasn’t nervous. I know what Robbie brought to the table, he’s a tough competitor. This is not the first fight I would pick. He’s a friend of mine, I admire his career, hats off to Robbie, but I’ve been envisioning this belt being around my waist my entire life. Ever since I stepped into the Octagon, I’ve had this mission.”

After a tentative opening from both fighters, Woodley shot in with a right hand and looked for a takedown, but it was stuffed by Lawler. A tie-up against the fence was broken by referee Dan Miragliotta and the two resumed their standup battle, but only momentarily, as a flush right hand from Woodley dropped Lawler hard to the mat. More unanswered rights followed, with Miragliotta stopping the fight at 2:12 of the first round.

“We knew Robbie would be well prepared for a takedown, that he would be hitting me with knees and uppercuts and being aggressive to defend it,” Woodley said. “So I used a little speed and a blitz to cover the gap, and when I saw the opening, I went for the right hand. Something kept telling me that right hand was going to be open and I went for it.”

“It is what it is,” Lawler said of the finish. “He feinted me and my hand went down, he threw a punch over the top and caught me.”

With the win, the 34-year-old Woodley, whose last bout was a January 2015 win over Kelvin Gastelum, improves to 16-3; Lawler, also 34, falls to 27-11 with 1 NC. He was making the third defense of the welterweight title he won from Johny Hendricks in December of 2014.