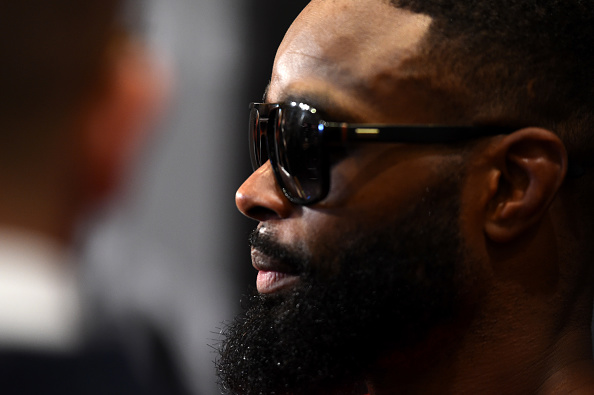 No matter what happens in Saturday’s UFC 228 main event against Darren Till, Dallas will always hold a special place in the heart of UFC welterweight champion Tyron Woodley.

It was in this city in March 2014 that Woodley went from prospect to contender in the space of seven minutes against former interim champion Carlos Condit.

“I was this young, hungry fighter,” recalled Woodley. “I called (UFC President) Dana (White) and said, ‘Man I want to fight Carlos.’ And nobody wanted to fight Carlos Condit at that time. It was a shot in the dark and I didn’t think Carlos would take it. At the time he was the number one welterweight, and he said yeah. So I said this is my time to shine.”

Condit was coming off a Fight of the Night win over Martin Kampmann and was in the mix for another crack at the 170-pound crown. Woodley was 2-2 after a 10-0 start to his MMA career, and while he was fresh from a blistering knockout of Josh Koscheck, he was at that delicate point in his career where he could either soar forward or fall behind. And Condit was a truth machine who was going to find out which way the Missouri native was going to go.

It was full speed ahead for “The Chosen One.” The final result will say that Woodley won in the second round when Condit couldn’t continue due to a knee injury, but up until the end, it was the hungry underdog pushing the pace and taking the lead.

In the four-plus years since that fight, Woodley has gone 5-1-1, winning the welterweight title and successfully defending it three times. This weekend, he returns to Dallas to face Till, a fighter who reminds him of how he was before the Condit bout. And how he is once again.

“It’s full circle now,” Woodley said. “Now I’m hunted and now it’s the young fighter that wants to fight me. And I remember that hunger, and that’s something you cannot underestimate. You cannot underestimate a young, hungry fighter that honestly and truly wants it, that has nothing to lose. That’s a very dangerous fighter, on top of the power, the size and abilities that he has. So I’m really focused.

“I’m really tuned in and I’m really digging deep and finding that old Tyron that was a pitbull that would have fought anybody, anytime, anywhere.”

That’s a scary prospect for Till or anyone at 170 pounds to be facing, because when Woodley is dropping bombs and slamming opponents, it’s a reminder why he’s the king of the division and someone who hasn’t tasted defeat since 2014. And after a year on the sidelines due to injury, he’s hungrier than ever to not just beat Till, but to get closer to his ultimate destination.

It’s part of a champion’s learning process, something that doesn’t get addressed too often once a fighter reaches the pinnacle of the sport. Woodley has had some twists and turns since taking the belt from Robbie Lawler, in 2016, but as his fourth title defense approaches, he’s still standing, still reigning and defending, and he’s figured it all out.

That means turning down some opportunities in favor of training, sacrificing time with friends and family, and keeping that hunger that Liverpool’s Till is bringing into the Octagon at American Airlines Center.

Sounds like the 2014 version of Tyron Woodley is back. But as focused as the champion is, he’s still willing to give some advice to the challenger. Or is it a warning?

“Everybody thinks they want some, but they don’t really want none,” he said. “When they lock that cage and I hit you, even if I don’t land it on your face, if I hit your glove, and you feel the heat that’s coming, and I press you and I slam you down and you want to get up so bad but you can’t, that’s when anxiety kicks in. Those are things he’s never experienced.”