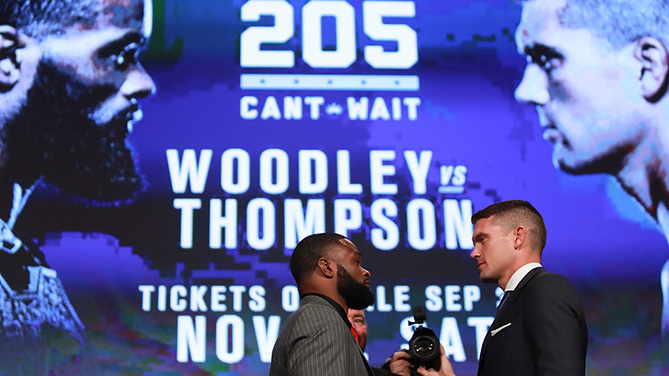 Tyron Woodley, fresh off his highlight reel knockout of former king Robbie Lawler at UFC 201, took the stage at the UFC 205 on sale press conference Tuesday for the first time as the new welterweight champion.

And New York let him have it.

“I’m getting booed. This is the first time I’ve been getting booed, and it’s actually kind of dope,” Woodley said.

The St. Louis native was likely getting backlash from what fans perceived as him ducking Stephen Thompson back in July when he said he’d rather fight Nick Diaz. Many fans believe Wonderboy is the rightful No. 1 contender.

Thompson, who trains with Chris Weidman and considers New York a home away from home, called out Woodley for the title fight from his FS1 broadcast chair moments after Woodley beat Lawler for the strap. Woodley has explained since then it wasn’t his intention to duck Thompson, but that he’d rather have had a money fight with Diaz or former champion Georges St-Pierre.

Woodley explained that when the Thompson fight was offered, he signed the dotted line right away.

“The first opportunity the Wonderboy fight was offered to me officially I accepted the fight the first time,” Woodley said. “My legacy does not depend on what an individual thinks of me. I’m a high-level athlete, my resume speaks for itself, and I will fight Wonderboy Nov. 12 and everybody will see why I’m the best welterweight in the world.”

Thompson did agitate Woodley by picking Lawler to win their UFC 201 title clash. But as the challenger explained at Tuesday’s press conference at Madison Square Garden, he just had his eyes on the current champion.

“At the time I thought that Robbie Lawler was going to win. He was the guy standing in front of me because he had the belt,” Thompson said. “So that’s who I wanted to face. Whoever has that belt is the guy that I want.”

RELATED VIDEO: McGregor-Alvarez first staredown | All the faceoffs from UFC 205 on sale press conference | Woodley and Wonderboy confrontation on FS1

Woodley is pumped to get his chance to perform on one of the biggest stages in all of sports: New York City’s famed Madison Square Garden. He plans to turn boos into cheers by beating Thompson -- who opened as a favorite in Las Vegas -- and retaining his title.

“You can boo if you want but there’s one thing you have to call me and that’s the welterweight champion of the world,” Woodley said. “I knocked out the most vicious welterweight – the fighter of the year with fights of the year—in record-breaking time. So you have to respect me no matter what.”