TORONTO, September 21 – Welterweight up and comer Stephen “Wonderboy” Thompson showed off his world-class striking ability once again in his UFC 165 prelim bout against fellow standup specialist Chris Clements at the Air Canada Centre Saturday night, stopping his foe in the second round.

Given the unpredictable striking styles of both men, the first round was a fun one to watch, with Thompson holding the edge thanks to cleaner technique and a couple takedowns. Clements kept attacking through, a tactic that cost him early in the second when Thompson dropped him with a punch. Clements was able to weather the ensuing attack, but once he rose a right hand wobbled him a second time. This time the follow up shots ended the fight, with referee John McCarthy intervening at 1:27 of the round.

Lightweight prospect Myles Jury didn’t show off the spectacular form of his previous UFC bouts, but he did pick up another win for his unbeaten record, taking a split decision over Montreal’s Mike Ricci. 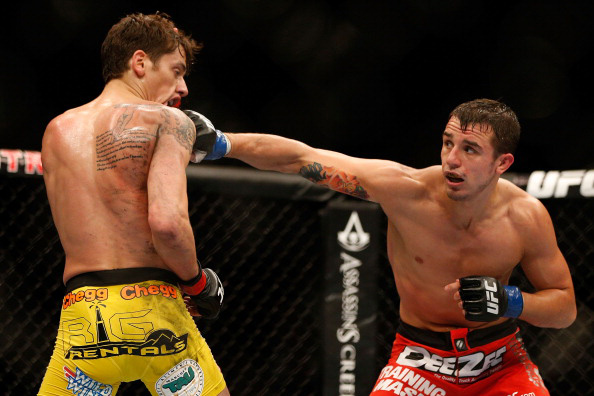 There was little in the way of sustained action in the opening round, and while Ricci was slightly busier early, a hard right hand to the face by Jury with three minutes left and a takedown a minute later likely secured the round for the San Diegan.

The second was tough to score, with Ricci again staying busier but Jury landing the harder shots, albeit not enough for him to put the Canadian in trouble.

A third round takedown by Jury kept putting points on the board for the American, but with little compelling action from either fighter, the crowd made their presence known, even counting down the final seconds of the bout. 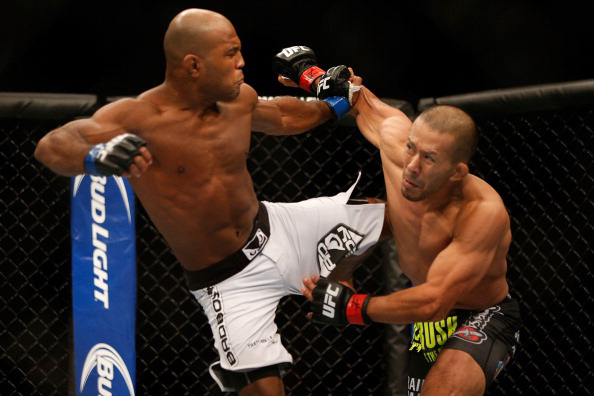 The first round had an interesting dynamic to it, with jiu-jitsu ace Reis keeping it standing until the two went to the mat with 40 seconds left in the round. Up until that point, Reis stalked and Menjivar countered, making for a striking chess match.

The chess match took place against the fence and on the canvas at times in the second, with the fans appreciating the opportunity to watch the two vets match wits. It was Reis again pushing the action, aggressively following Menjivar on the feet and getting takedowns to put the fight in his wheelhouse.

Menjivar fought off Reis’ takedown attempts early in the third before finally succumbing with a little under three minutes left. The crowd got restless with Reis in the top position as he smothered any attempt at offense by Menjivar, but the Brazilian was momentarily move into the mount, only to return to the guard as the clock ticked down. 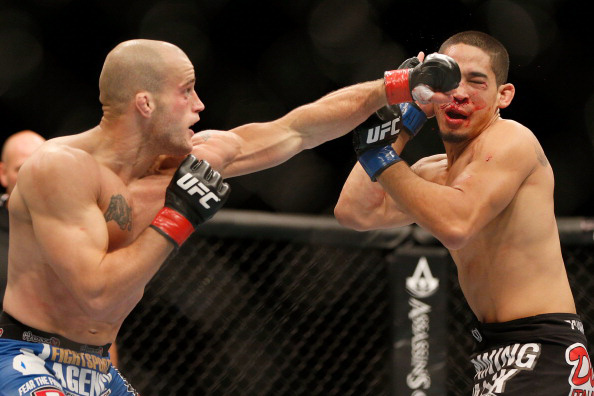 via first round submission.

“Anybody that steps in there with me, I’m coming for them,” said Gagnon.

Kimura and Gagnon set a fast pace from the start, with Honolulu’s Kimura (11-1) firing off effective kicks and Ontario’s Gagnon (10-2) doing damage with his punches as the crowd roared with every blow. Midway through the opening round, Kimura landed with a body shot that hurt Gagnon, but the Sudbury product immediately took his opponent down when he rushed in to follow up. Kimura was able to get back to his feet, but when the two went to the mat again, this time Gagnon sunk in a tight guillotine choke that put the Hawaiian to sleep and prompted a stoppage by referee Yves Lavigne. 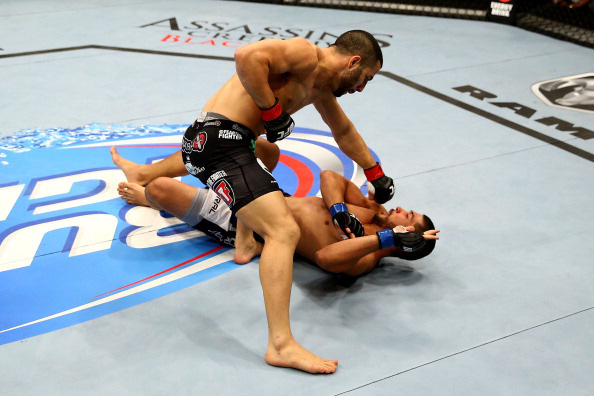 Montreal lightweight John Makdessi picked up Canada’s first win of the night and he did it in style, knocking out Renee Forte in the opening frame.

Forte showed no trepidation when it came to standing with Makdessi, and in the early stages of the bout he had some success. But as Makdessi got his rhythm, Forte began to get reckless, and after missing a wild right, “The Bull” pounced with a short counter right to the temple that put the Brazilian on the mat. Forte looked to be getting his bearings back, but after a series of unanswered shots, one of which put Forte out, referee Todd Ronald Anderson stopped the fight at 2:01 of the first round.

A late surge from London, Ontario’s Jesse Ronson wasn’t enough for him to secure his first UFC win, as that honor went to Belem’s Michel Prazeres, who took a three round split decision victory.

After getting a rousing ovation from his home province crowd, Ronson (13-3) had a rough time 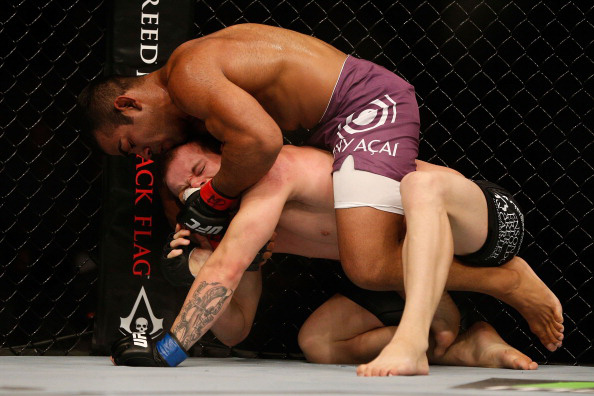 getting untracked against the ground-minded Brazilian, who took him to the mat and kept him there for the majority of the round, nearly sinking in a rear naked choke on a couple occasions.

There was more of the same in the second round, as Prazeres (17-1) dominated the action on the mat. This time though, Ronson got loose in the final minute and got off a couple kicks that brought the crowd back into the fight.

Ronson came out with a sense of urgency in the final round, and he appeared to be finding his range on the feet as Prazeres tired. But in the final two minutes, Prazeres got his second wind, and while Ronson got off a late slam and some ground strikes, the Brazilian’s own takedown moments earlier effectively put an end to the comeback effort of the Canadian. 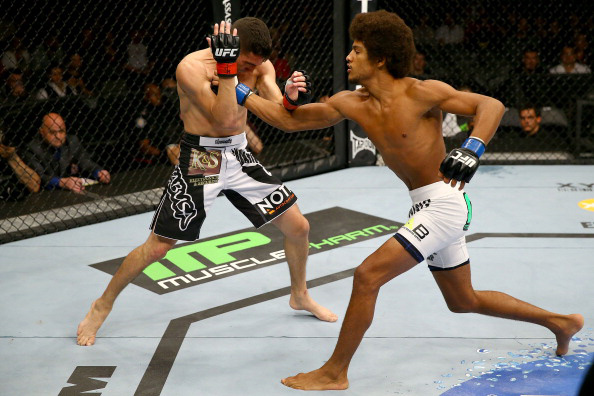 Caceres (9-5, 1 NC) started the bout off well enough, but after being sent to the canvas by a Delorme left, it was the Canadian taking control and dominating on the mat until Caceres fought his way back to his feet for the final 15 seconds of the round.

With Delorme (9-2, 1 NC) looking gassed for much of round two, Caceres was able to take control with a solid stick and move standup strategy that piled up the points whenever the two remained upright, and the former Ultimate Fighter 12 cast member kept the heat on in the final stanza, not doing enough to finish Delorme but to lock up the victory.

Heavyweight newcomers Daniel Omielanczuk and Nandor Guelmino battled it out on the feet and the mat for two-plus rounds until Omielanczuk put an end to matters via third round knockout. 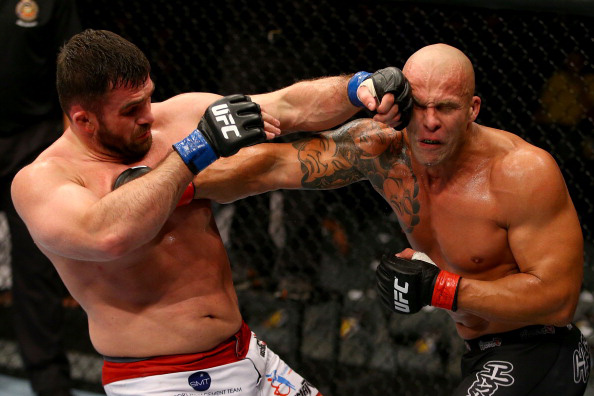 opening stages of the fight, with ensuing grappling segments won by Poland’s Omielanczuk, who showed a better rounded attack.

In the second, Omielanczuk and Guelmino continued to show off their kicking game, but after Omielanczuk opened up Guelmino with body shots, he moved his attack upstairs before taking his foe down in search of a submission. In the process of looking for a kimura though, Omielanczuk gave up his back, and the Austrian newcomer eagerly took the position and fired off punches until the Warsaw native was able to get to his back. Still not in the best place to be, Omielanczuk tried to work the arm again, this time from his back, but a big forearm by Guelmino put an end to that thought.

Fatigue got to both fighters in the third round, but a brief break to replace a lost mouthpiece was all the recharging Omielanczuk needed, as a crisp left hook dropped Guelmino hard to the mat, prompting a stoppage by referee Dan Miragliotta at 3:18 of the final round.