'Wonderboy' Sharp As Ever In Win Over Masvidal 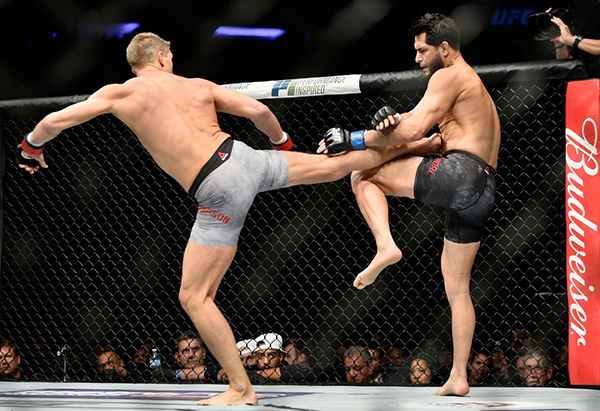 NEW YORK – After two bouts with welterweight champion Tyron Woodley that resulted in a draw and a loss, Stephen Thompson got a new opponent and a new winning streak underway Saturday at Madison Square Garden, as he scored a shutout three-round unanimous decision over Jorge Masvidal that kept his hopes for another crack at the crown alive.

“I could have done better tonight, but I’m not giving up on that title,” said Thompson.

Controlling the range throughout the first five minutes, Thompson’s speed and accuracy served him well in the opening frame, as he potshotted Masvidal and even scored a flash knockdown with a sidekick late in the round.

The Floridian initially went after Thompson’s lead leg with kicks, but as his opponent piled up the points, Masvidal started throwing with more bad intentions, and early in the second he followed up a missed takedown with a flurry of punches. Moments later, Thompson delivered another knockdown, and while Masvidal got right back to his feet, he was having difficulty picking off the strikes of the South Carolina native and his frustration was clear.

A single leg takedown attempt by Masvidal came up empty early in round three, and his subsequent flurry did little to deter Thompson from his game plan. In fact, Thompson became more flatfooted in the final frame, confident in his ability to keep controlling the action. Even the exchanges in the pocket were going the way of “Wonderboy,” who was just a step ahead of Masvidal all night.