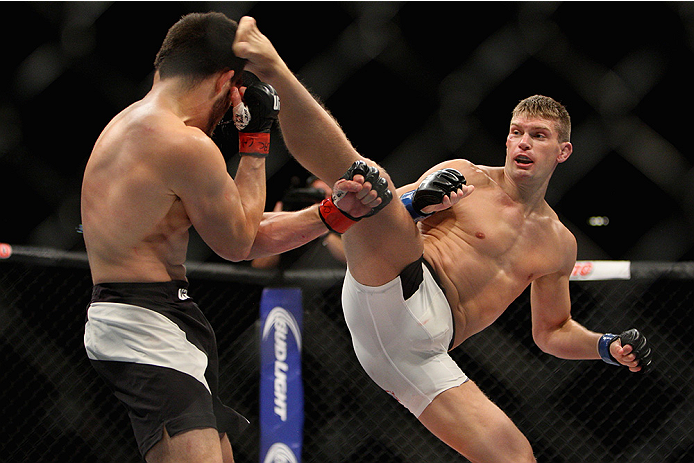 There is something about spacing and distance that has been a natural appeal for Stephen Thompson since his youth. Although oxygen, tension and anticipation are the only things resting in the balance between combatants in competition, a standout career in kickboxing taught the South Carolina native to not only find comfort at range, but ownership of the space between him and his target.

“Wonderboy” would go on to become a phenom in the world of professional striking, and use that momentum to spark a jump to the biggest stage in mixed martial arts when he signed with the UFC back in 2012. And in three short years the Simpsonville-based fighter has not only validated every ounce of hype that has surrounded him during his time inside the Octagon, but has turned in his prospect label for a certified place in the coveted top 10 rankings over that span.

Thompson knew breaking into the elite level of the crowded welterweight ranks was never going to be easy, but it was also a goal he wouldn’t be denied from obtaining. He knew exactly what was on the line when he squared off with Jake Ellenberger in the main event at The Ultimate Fighter 22 Finale back in July, and after unleashing a flurry of highlight material offense, his passage into the deeper end of the 170-pound fold was stamped.

“I knew going in that this was a crucial fight for me to breakthrough to the next level of the division,” Thompson said. “Ellenberger was ranked No. 8 and I was ranked No. 15 or 16 and that was my chance to step up to bigger fights. It was also a step up in competition.

“Ellenberger was no joke. He’s a heavy hitter with good wrestling, and with everybody always doubting my wrestling skills, it was a great chance to show what I can do in that regard. I was ready for the fight wherever it took place.”

And even though his spinning kick knockout of “The Juggernaut” will be a certain contender for the best KO of 2015, there were plenty of telling moments about Thompson’s progression that were transparent before that kick separated the Nebraskan from his senses. Not only did he overcome getting put on the canvas via Ellenberger’s power early, but he also flexed what critics have deemed his weakness in the wrestling department, as Thompson put the perennial contender on his back for a brief time in the only round of the fight.

Thompson was admittedly thrilled about getting the victory and his Performance of the Night bonus, but getting to showcase the elements he’s worked so diligently to improve in live time against a game opponent is what allowed him to find a deeper sense of satisfaction in the win.

“He smoked me in the head with a right hand and it dropped me,” Thompson recalled. “It dropped me, but it was a flash knockdown so I was still coherent. It still looked bad though, but it was a confidence booster to me knowing I could take Ellenberger’s best shot and keep going. I used the clinch to recover, and once I did he tried to take me down, but I ended up reversing it and taking him down. That proves something when you can put a wrestler as good as Ellenberger on the ground.

“I actually didn’t see the spinning kick being there, but that’s why I train and listen to my coaches the way I do. In the cage I heard my dad and coach Ray Thompson say, ‘Spin,” so I threw the heel kick and it landed one time and he recovered well. It was pretty funny though because Chris Weidman was down there next to the cage, and he kept telling me to let Jake back up. As soon as he got back to his feet my dad told me to spin again and I knew I could land it again because he was still dazed. I threw the spinning kick again, hit him on the forehead and that’s all she wrote. It also shows how important it is to listen to your coaches outside the cage because they see things you don’t.”

With the victory over Ellenberger added to his resume, the road ahead for Thompson to traverse the dangerous welterweight mountain is one filled with a potential list of high-caliber finishing artists. The ranks of the 170-pound collective have remained one of the most consistently stacked weight classes under the UFC banner for the past decade, and Thompson has long-envisioned himself becoming a major player in that divisional picture.

His most recent victory, coupled with a five-fight winning streak, has shown that Thompson has taken significant strides to becoming recognized as a force to be reckoned with in the welterweight fold. And with that in mind, he wants his next challenge to come from even further up the ladder, where risk and reward become that much more amplified.

“It is every fighter’s goal in this division to break that top 10 barrier and now I’ve done that,” Thompson said. “I’m ranked No. 8 now and I know there has been talk about me fighting guys who are ranked several spots lower, but I’m only interested in moving forward, and the only way to do that is to face guys ranked higher than I am. Don’t get me wrong: Every fighter in the UFC is good, but the fighters in the top 10 are there for a reason. A lot of them are strong wrestlers and that’s why I’m thankful to be working with Chris Weidman as much as I do.”

In return for the undisputed middleweight champion helping out during Thompson’s camps, the rangy striker then zips up to New York City to help the “All-American” in his preparation. Thompson has played vital roles in the past as he’s mimicked Anderson Silva and Lyoto Machida, but he’ll now step into LAW MMA ready to fill the shoes of current title challenger Luke Rockhold.

And while Thompson’s friendship with Weidman makes him admittedly biased to what the Long Island native is capable of, the fighter in him has seen and felt what Weidman is capable of, and believes the 185-pound strap will be coming back to “The Empire State” after the Ray Longo protégé’s next fight at UFC 194 in December.

“Chris Weidman is the man, dude. I don’t care what anyone says,” Thompson said. “He’s the champ for a reason. Of course I’m not taking anything away from Rockhold here, but he doesn’t have anything on Chris. Rockhold is a good striker and he uses it to set up his ground game, as we saw in his fight with Lyoto Machida. I don’t think he wanted to go toe-to-toe with Machida so he used his striking to get in on him, take it to the ground where he ended the fight with a submission. Good showing from Rockhold, but I don’t think he fought Machida at his best.

“Chris fought Machida when he was at his best and on point. Against Rockhold, Lyoto looked flat and just off his game, but that wasn’t the case when Chris fought him. Chris ended up banging out the victory and I think he’s going to do the same thing to Rockhold.”