A pioneering force in women’s MMA, former UFC women’s bantamweight champion Miesha Tate was one of the toughest and most popular fighters in the game over her nine years in the sport. Today, the celebration of Women’s Week on UFC FIGHT PASS continues with a look at five of Tate’s most memorable moments.

Marloes Coenen
Strikeforce: Fedor vs Henderson – July 30, 2011 (Watch on UFC FIGHT PASS)
A look at Miesha Tate’s pre-UFC career shows that she took an old school route to the top, with two nights in particular standing out. The first was her pro debut in 2007, when she fought twice, defeating Jan Finney before losing to Kaitlin Young. In one night. Three years later, she would do the same thing, defeating Maiju Kujala and Hitomi Akano on the same Strikeforce card to earn a shot at champion Marloes Coenen. And in that fight against one of the sport’s original stars, Tate had to weather a few storms to submit Coenen in the fourth round, earning the 135-pound title in the process.

Julie Kedzie
Strikeforce: Rousey vs Kaufman – August 18, 2012 (Watch on UFC FIGHT PASS)
Tate’s reign in Strikeforce wouldn’t last long, as she lost the belt to her nemesis Ronda Rousey in her first defense. In her next bout, she was matched up with Julie Kedzie, a fighter who never really got her just due because when she got to the UFC, she was on the tail end of her career. But a prime Kedzie was in there with Tate, and she nearly pulled off the win in a back and forth battle, drilling Tate with a head kick in the third round that dropped “Cupcake.” But it was Tate who showed her resilience with an armbar that ended matters at 3:28 of the final frame. Next stop, UFC.
MORE FROM WOMEN'S WEEK: Best Moments from - Amanda Nunes | Cris Cyborg | Ronda Rousey

Cat Zingano
TUF 17 Finale – April 13, 2013 (Watch on UFC FIGHT PASS)
A coaching spot against Rousey on season 18 of The Ultimate Fighter was on the line in Tate’s UFC debut against Cat Zingano, and after two rounds, it looked like it was a done deal for the Washington native. But then Zingano took a page out of Tate’s comeback playbook and roared back, halting Tate with a little over two minutes left in the Fight of the Night winning bout. It was a disappointing setback for Tate, who ultimately got that TUF 18 coaching gig anyway when a knee injury forced Zingano out of the show.

Sara McMann
UFC 183 – January 31, 2015 (Watch on UFC FIGHT PASS)
Tate would lose her rematch against Rousey after coaching against her on TUF 18, and after a pair of wins over Liz Carmouche and Rin Nakai, she was matched against Olympic silver medalist Sara McMann at UFC 183 to kick off her 2015 campaign. Early on, it didn’t look good, as she was dropped and suffered a broken orbital bone at the hands of McMann. But…if you notice a theme here, it’s that Tate is one of the toughest fighters in MMA, and over the next two rounds, she didn’t just battle her way back into the bout, she won it, taking a hard-fought majority decision win. 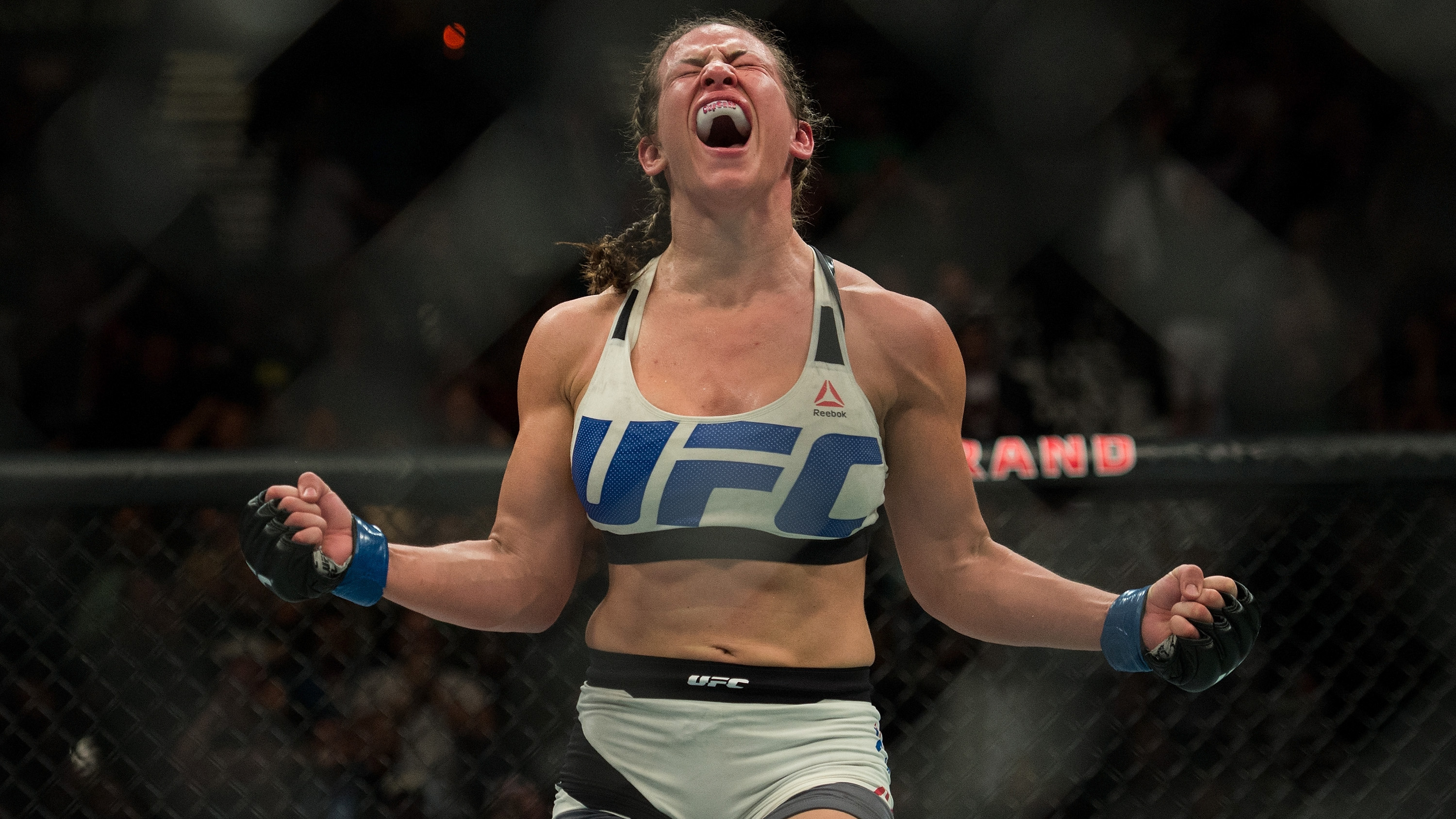 Holly Holm
UFC 196 – March 5, 2016 (Watch on UFC FIGHT PASS)
A decision win over Jessica Eye in July 2015 made it four consecutive wins for Tate, but after two losses to Rousey, a third bout likely wasn’t happening anytime soon. Enter Holly Holm, who dethroned Rousey in November 2015, setting up a March 2016 title shot for Tate. In control from the start, Holm only had one hiccup in the first four rounds, a second round submission attempt from Tate that ultimately came up short. But it was an omen of things to come, as a dominant lead heading into the final round turned into a loss for Holm, as Tate locked in the rear naked choke that made her a world champion with only 90 seconds left in the fight. As she said following her greatest victory, “I had to be like a pitbull on a bone. I couldn’t let her get out of that one.”