A member of the International Women’s Boxing Hall of Fame, Holly Holm moved to MMA full-time in 2013 and proceeded to take a UFC belt within two years. Now with Holm looking to make history as the first woman to win UFC titles in two weight classes when she faces Cris Cyborg in the main event of UFC 219 on Dec. 30, it’s the perfect time to continue the celebration of Women’s Week on UFC FIGHT PASS by revisiting five of her defining moments.

Jan Finney
Fresquez Productions: Clash in the Cage – September 9, 2011 (Watch on UFC FIGHT PASS)
Before Jan Finney faced Holly Holm in 2011, her record held the following names: Cris Cyborg, Liz Carmouche, Miesha Tate, Shayna Baszler and Julie Kedzie, just to name a few. Needless to say, that’s a tough assignment for someone fighting her second pro MMA fight, but Holly Holm was not your average rookie. In fact, at the time she fought Finney, she was still an active boxer on top of the pound for pound list. But it was a body kick that ended Finney’s night and made it clear that “The Preacher’s Daughter” may have been thinking of a full-time change of sports.
MORE FROM WOMEN'S WEEK: Best Moments from - Amanda Nunes | Cris Cyborg | Ronda Rousey | Miesha Tate

Anne Sophie Mathis II
June 15, 2012 (Watch on UFC FIGHT PASS)
Less than three months after beating Finney, Holm returned to the boxing ring and lost for the first time in eight years when she was stopped by France’s Anne Sophie Mathis. The defeat stunned the boxing world, but even more stunning was that seven months later, Holm was back in with Mathis, and the second time around, she got payback, winning a unanimous decision that put to her most crushing defeat to rest.

Marion Reneau
UFC Fight Night – July 15, 2015 (Watch on UFC FIGHT PASS)
Holm would box two more times before moving to MMA full-time in 2013, and she’s never looked back. Following her last boxing match, she won four MMA bouts, upping her record to 7-0. Then it was off to the UFC, where she debuted with a tougher than expected split decision win over Raquel Pennington in February 2015. Five months later, though, Holm had settled in, and in a bout against Marion Reneau, she began to show off the skills that would one day see her put a world championship belt around her waist. 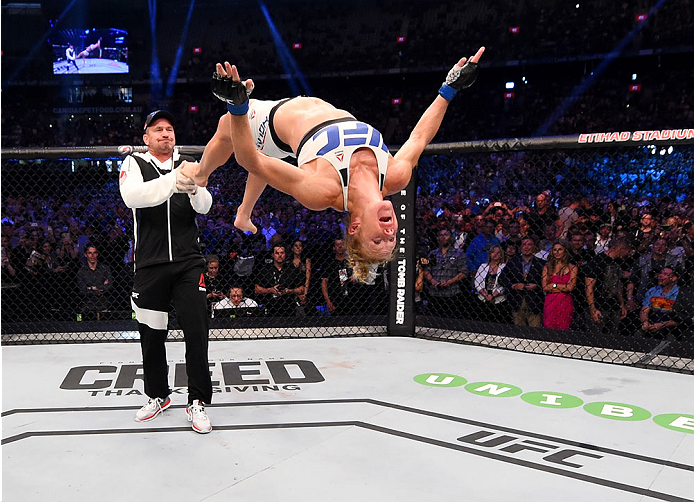 Ronda Rousey
UFC 193 – November 15, 2015 (Watch on UFC FIGHT PASS)
More than 56,000 people packed Etihad Stadium in Melbourne, Australia to watch the seemingly unbeatable Ronda Rousey defend her UFC women’s bantamweight title against Holm. And while the Albuquerque native was the underdog, she didn’t fight like it, as she controlled the bout from the start before ending it with a head kick heard ‘round the sports world. At :59 of round two, Holly Holm became a UFC champion.
GET TICKETS TO UFC 219 FEATURING HOLLY HOM VS. CRIS CYBORG

Bethe Correia
UFC Fight Night – June 17, 2017 (Watch on UFC FIGHT PASS)
In Holm’s first title defense, she was cruising to a victory over Miesha Tate before Tate caught the champion in a rear naked choke in the fifth round and ended the bout. A pair of decision losses to Valentina Shevchenko and Germaine de Randamie followed, and suddenly, Holm was 0-3 heading into her June matchup with Bethe Correia in Singapore. Yet with her back against the wall, she came up big, bringing back her devastating head kick to finish the Brazilian and put Holm back on track heading into her UFC 219 title fight against Cyborg for the featherweight crown.