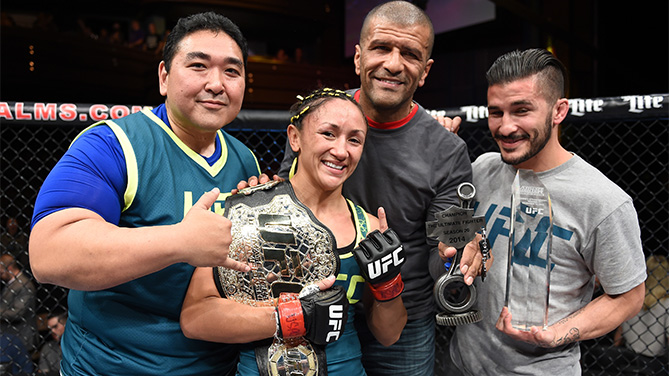 The number one seed on season 20 of The Ultimate Fighter, Carla Esparza, remained the best 115-pounder on the planet Friday night at the Palms in Las Vegas, Nevada, and now she has the hardware to prove it, as she submitted Rose Namajunas in the third round to become the UFC’s first strawweight champion.

“This is the most amazing, unreal feeling I’ve had in my life,” Esparza said after joining women’s bantamweight champion Ronda Rousey as the only female fighters to hold title belts in the UFC.

“Rose is such a phenomenal athlete,” Esparza said. “She’s so dangerous and has so many weapons. I knew it was going to be a tough fight and it was. She cracked me with a lot of things I didn’t see coming, but in the end, I think my wrestling got me the win.”

The lanky and unorthodox Namajunas looked to be a step ahead of Esparza speed wise, and after ripping off some quick combinations, it looked like Esparza was going to be in for a rough night. But in the midst of a scramble, the Californian scored a takedown, one of two she picked up in the opening two minutes. Namajunas jumped up quickly though, and she continued stalking, throwing kicks from every angle as Esparza tried to gauge her timing. With 1:30 left, Esparza got the takedown and fired off ground strikes, and as Namajunas rose, the “Cookie Monster” kept throwing, drawing a roar from the crowd before a third takedown just before the horn.

The pace was a bit more measured in the first minute of round two, and then Esparza struck with a takedown and some crushing shots from the top position. Namajunas took them well and got back to her feet with three minutes left, ready to get back to work. A Namajunas takedown attempt was smoothly reversed by Esparza, leaving the former Invicta FC champ on top and free to fire off her ground strikes. And she did just that, eventually getting into the mount position and dominating the final 30 seconds.

Esparza put Namajunas down early in the third, and the ground and pound assault continued until “Thug” Rose gave up her back. From there, it was just a matter of time until Esparza sunk in her patented rear naked choke, and once it was locked on, Namajunas was forced to tap at 1:26 of round three.

With the win, Esparza improves to 11-2; the 22-year-old Namajunas, who was attempting to become the youngest champion in UFC history, falls to 3-2.
> Watch: Carla Esparza Octagon Interview | Carla Esparza Backstage Interview 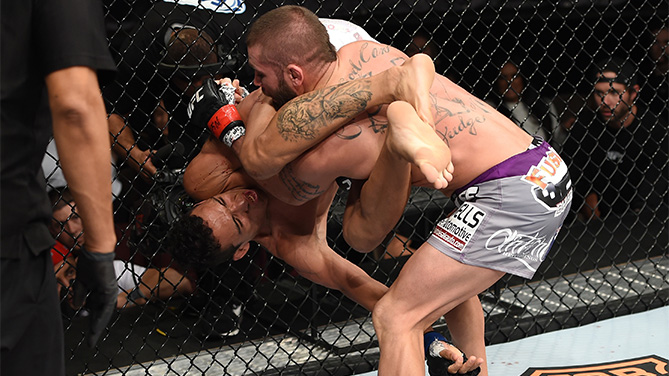 Featherweight submission specialist Charles Oliveira did everything in his power to finish off Jeremy Stephens in the co-main event, and while he wasn’t able to complete the task, he did get the victory, earning a three-round unanimous decision.

Oliveira closed ranks and went all in for the takedown, and when he didn’t get it, he pulled guard and locked up Stephens’ arm. “Lil’ Heathen” tried to slam his way out of trouble, but Oliveira kept his grip tight. It looked like it was over, but Stephens held on and eventually broke loose midway through the round. Now it was time for the Iowan to get his ground strikes off, and after a few shots, he rose to his feet. Oliveira stayed close for a spell before the two broke and while Stephens tried to land a haymaker, it was to no avail.

Brazil’s Oliveira was successful in getting the bout back to the mat early in round two, and he put the pressure on, again locking in an armbar. Miraculously, Stephens escaped and got back to his feet, but a guillotine choke would follow next. Again, the veteran got free, and while another armbar was coming in the final minute, the horn intervened.

Down big on the scorecards, Stephens tried to land the fight-altering haymaker in the final frame, but Oliveira fought a smart round, doing enough to win the frame while still staying defensively sound. 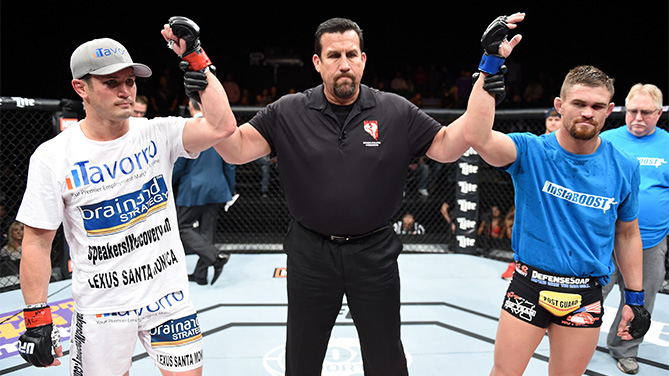 It was a bout that was shaping up to be a good one between lightweights Daron Cruickshank and KJ Noons, but an accidental eye poke by Noons rendered Cruickshank unable to continue in round two, leaving the final call a no contest.

Cruickshank did it all in the first round, whether it was punching, kicking, or going for takedowns, and he was successful at all of the above. That’s not to say Noons wasn’t in the fight, as he landed plenty of hard shots, but the “Detroit Superstar” took them all with no issues.

Early in the second, that all changed when Cruickshank took an inadvertent poke in the left eye, prompting a visit from the Octagonside physician. With Cruickshank unable to see out of the eye, the bout was halted 25 seconds into the round, prompting the no contest verdict.

Noons moves to 12-6 with 1 NC; Cruickshank to 16-5, 1 NC. Per UFC president Dana White, Cruickshank suffered a torn lower eyelid that will require surgery, but no damage to the eyeball has been seen at the moment. 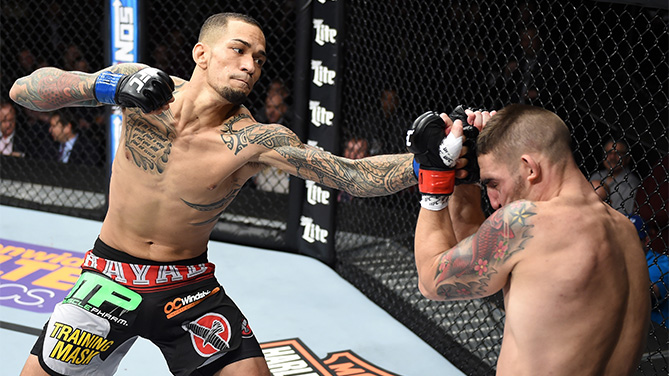 A picture perfect spinning back kick by Hawaiian lightweight Yancy Medeiros didn’t get the finish against Joe Proctor, but it did set up what came moments later – a first-round submission victory.

Proctor (10-3) went on the attack with leg kicks early and often, most landing with a thud. In the third minute, Medeiros (11-2, 1 NC) rocked his opponent with a right to the head, briefly putting the New Englander in trouble. After clearing his head, Proctor went back to work and Medeiros eagerly did the same, but suddenly in the final minute, a slick spinning back kick hurt and dropped Proctor. Medeiros moved in for the finish, and after a few strikes, he found his opponent’s neck and sunk in a guillotine choke, with the tap coming at 4:37 of the opening round.
> Watch: Yancy Medeiros Backstage Interview 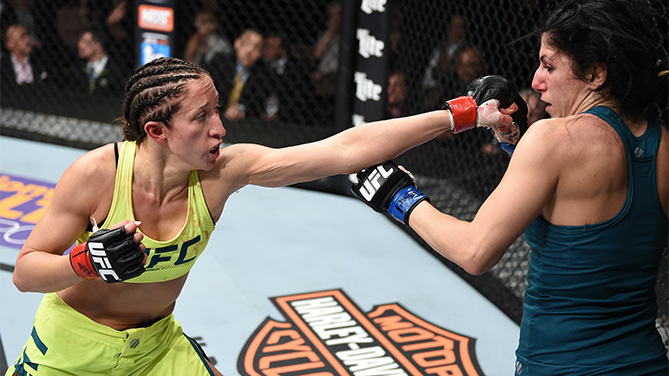 TUF 20 semifinalists Jessica Penne and Randa Markos put on a championship-worthy scrap in the main card opener, with Penne taking a split decision in a thrilling back-and-forth battle.

After a solid opening flurry from Markos, Penne responded with a throw to the mat, Markos emerging with a cut over her right eye. Moving into full mount at times, Penne aggressively looked for the finish and lost position, allowing Markos to get in the top spot. There would be more position changes and frantic action, Penne ending up on top to end the round.

Markos’ striking was sharp in round two, and even on the ground the Canadian began to assert herself even more. Penne rallied in the second half of the round though, using her own ground game to keep Markos at bay.

Opening up the final round with two spinning back fists, Markos was confident in her stand-up attack, and as she alternated flurries, uppercuts, and counters, it was clear that if she was going to win, it was going to be with her striking. Penne apparently felt the same way, opting to take Markos to the mat with less than three minutes to go, and then it was the Californian’s turn to go on the offensive and she nearly sunk in a choke. Markos responded with an inverted triangle late in the round, capturing just how evenly matched this bout was.
> Watch: Jessica Penne Backstage Interview