Winning is the Only Thing for Ken Stone

"I don’t think anything can really prepare you for the Octagon unless you
do it, so I’m just trying to get the experience and become a little
wiser as a fighter." - Ken Stone 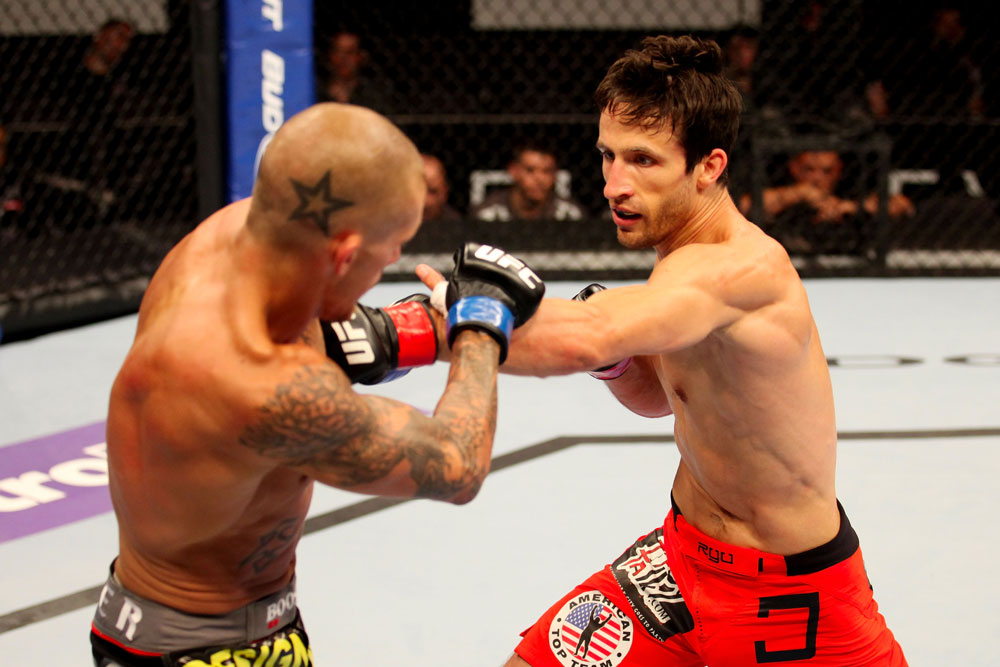 One of the benefits of being a UFC fighter is that a highlight reel knockout, a slick submission, or an action-packed three rounder will not just earn you bragging rights and a doubling of your paycheck should you win, but it may also get you a few extra bucks in your pocket if you pick up a post-fight award for KO, sub, or Fight of the Night.

Bantamweight Ken Stone was all in for that part of the deal when he signed with the Zuffa-owned WEC back in 2010, but after a knockout loss to Eddie Wineland in December of that year, and then another KO defeat, this one to Scott Jorgensen in his UFC debut in June of last year, Stone changed his thought process a bit.

Normally, you would think that the two defeats – and by knockout no less – would cause Stone to be gun-shy or fight cautiously in order to keep his place in the organization, but in his next two bouts, he delivered a pretty impressive comeback, submitting Donny Walker in the first round last September, and then winning a back-and-forth split decision over Dustin Pague. Gun-shy? No. Fighting safe? Uh-uh.

As for the two-fight introduction to WEC / UFC fans, he admits that he wasn’t ready for the bright lights the first time around, and the second, hey, he got caught.

“Both the guys are ranked in the top ten in the world, and I fought Wineland in my first fight in the big show,” said Stone. “I went from the local shows, fighting in front of a couple hundred, maybe a thousand fans, right into the big show. There are cameras on you all the time, you walk out and the light flashes on you, and I wasn’t ready for it. I wasn’t used to it and I think it showed in the Wineland fight. In both fights I was beating them both before I got slammed by Wineland and caught in my guard by Jorgensen, so I thought I was doing good until I panicked a little bit and tried to finish them as quickly as I could with a submission. I was kind of rushing, and in the last fight (against Pague) I wasn’t rushing at all. I was taking my time, and I was actually happy to go all three rounds to get the experience, and I think that’s only going to benefit me.”

If the 29-year old from Framingham, Massachusetts sounds like he’s got everything under control, that’s probably an accurate statement. A pro since 2007, Stone did his thing on the local New England circuit, but eventually he realized that he needed to up the ante as far as his training goes, and to do that he went south to train with American Top Team in Florida.

“If you go to a lot of the small gyms in Massachusetts where I was training, let’s say on a Friday night there’s maybe one person in the gym,” he explains. “Whereas when I’m down at American Top Team in Florida, if I go into the gym on a Friday night, it’s packed. That’s one of the main differences: there are always good people to train with. Every day of the week, and even holidays, there’s all the top guys training. Anytime you need to train, there are people there, and the level of the training partners is fantastic. I go back to Massachusetts frequently, and I love being able to train at all the gyms there, but just the amount of people there (at ATT) and the talent there, I just really like it.”

And when he went through the worst stretch of his pro career in 2010-11, he had plenty of teammates to help him realize that hey, losing is occasionally part of the game, and that it’s how you respond to it that dictates your true worth as an athlete.

“They’re all there for the support and they all back me, win or lose, which is fantastic,” he said. “I can always go to anybody there for advice and for help, and everybody’s top notch. But I don’t think anything can really prepare you for the Octagon unless you do it, so I’m just trying to get the experience and become a little wiser as a fighter.”

Part of that experience involves fighting in different environments under different circumstances. For his bout this weekend against Erik Perez, Stone will be fighting in the altitude of Denver, Colorado for the first time. So to get ready, he went out to the Mile High City a couple weeks earlier to get acclimated. Good move.

“I’ve been out here for a little while trying to get used to the air out here, because I’ve never been here before,” said Stone. “I know that my opponent trains at Greg Jackson’s and he trains in the altitude, so I’ve done my research on it and if there’s any way I can get rid of his advantage, I said I’ve got to get out here early and get acclimated.”

So has he felt the difference?

“To be honest, no,” he laughs. “But I did a lot of research and changed my diet quite a bit to prepare my body for the altitude. I normally don’t eat meat, and I’ve been having to eat more red meat, which has iron, and B12 and B6. I’ve also been taking a pre-natal vitamin because it has iron, B12, and B6 as well, and I’ve been eating a ton of dark, leafy greens – spinach, kale, broccoli and all that stuff. I’ve been really, really good with my diet to help prepare for the air, but like I said I haven’t noticed a difference yet.”

And you thought these guys just punched each other in the face?

“There is a science behind it, and anything that can help the athlete perform better is an advantage,” he said. “I’m really big into health and nutrition, so I take this very seriously.”

This Saturday, he looks to make it three UFC wins in a row against Perez in a fight that has the potential to steal the show. Not that he’s aiming to do that. Remember, the win’s the thing.

“I’ve seen a couple of his fights, he’s a game opponent, he’s got good standup, he’s pretty slick on the ground, and he has decent takedowns, so it’s gonna be a good fight for me,” said Stone of Perez. “We have similar records and similar styles, so I’m excited to see what happens.”