Winning is the Only Focus for McLellan 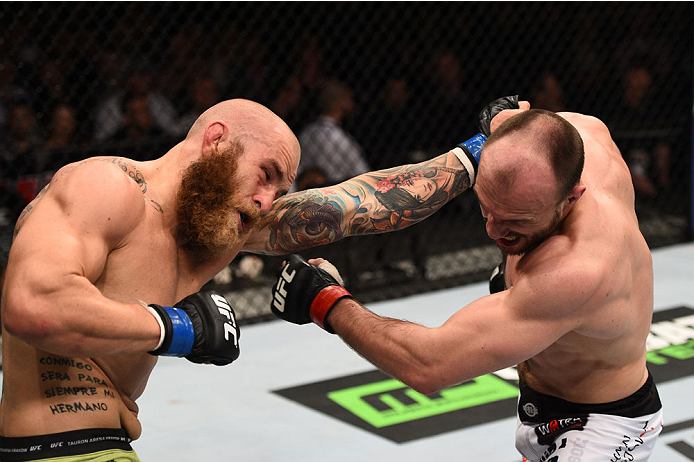 Garreth McLellan had heard all about the first-time UFC jitters before his debut in the promotion in April. He just didn’t think they would hit him after 14 previous pro fights. But they did, as he lost a three-round decision to Bartosz Fabinski.

Looking back, he wouldn’t pin his loss on a case of nerves. More accurately, he would call it realizing a little too late that there was work to be done in the Octagon.

“I don’t think it’s so much of a lack of not being able to compete,” he explains. “I think it’s a case of guys getting caught up in the occasion. It’s like ‘wow, I’m in the UFC,’ and you’re in this moment, and then all of a sudden ‘boom,’ you’re in the spot and if you’re not switched on to your job it can be very long night for you, as it was for me the first time. So you’ve got to be headstrong, focused and ready to do your job.”

Suffice to say that fighting in the UFC was unlike any other experience the 33-year-old had ever gone through.

“It is something different,” McLellan said. “It’s bigger, it’s faster, and if you’re not prepared for that in your mind, it can catch you very quickly.”

Back in action for his second go-round this Saturday against Bubba Bush, McLellan is a lot more comfortable in his surroundings and with what needs to be done to even up his UFC record in Dublin. And it’s as simple as knowing that when the Octagon door closes, it is still a fight.

“It’s a case of accepting where you are,” he said. “I’m in the UFC right now, I’m here and I’ve got a job to do. It’s not longer a case of ‘wow, I’m the UFC,’ and being around this limelight. You achieved it, you made it, you’re here – now you’ve got to get on with it.”

A pro since 2009, the Gauteng, South Africa native built an impressive 12-2 record at home, going 6-1 in his last seven bouts before getting the UFC call. Fabinski, so comparable in experience that he shared McLellan’s 12-2 record, won the bout clearly, but there were positives to take away for the “Soldierboy.”

“Whether I won or lost, it was an incredible learning experience for me,” he said. “I understand how I need to be as an athlete going forward, how we need to be as a group, what my process needs to be, and what my mental mindset needs to be to be successful here. The only time you lose is when you don’t take note of the things that you need to learn from, and we did.”

Texas’ Bush lost his Octagon debut as well, but it shows up on his record as a no contest due to the failed post-fight drug test of his opponent, Kevin Casey. Where the two middleweights differ is that Bush has been out of action since that bout in July of 2014, and that this is his first international fight. Both are factors the South African hopes will give him an advantage come Saturday, but he’s not counting on that being the difference between victory and defeat for him.

“It can pose a problem and it can definitely be something that can give me the edge, but it just depends on how he approaches it,” McLellan said. “If he comes in firing, accepts the challenge and works hard, it’s gonna be a fight. That whole process can catch him, he can get the jetlag and not cut weight properly, and there are so many factors that can happen that it’s all in how well prepared he is. But my mind is set on what I need to do, I’m sticking with that, and I’ll make sure that on the night I come in and complete that process.”

A win would be a big deal for McLellan, but also for South African MMA, as it would be the first UFC victory for one of the nation’s fighters since Trevor Prangley defeated Travis Lutter in 2005. That’s a long cold spell that McLellan hopes to snap, and, in the process, start making a case for a UFC event in his country.

“The sport has expanded,” he said. “It’s still the fastest growing sport in our country. It’s achieving great numbers in terms of viewership on SuperSport, which is our biggest sports channel, and it’s beating other sports by more than double, so there’s definitely a crowd out there. They love the sport, they love to come and watch it, and I think if the UFC touched our soil, it would be a big occasion and people would definitely come out and support something like that.”

Especially is one of their own is on the card. But first, it’s imperative that McLellan beats Bubba Bush, and that’s precisely the plan.

“We understand what it’s about, we know what’s going to happen, and we know the process and how it’s going to roll out, which is a big difference,” he said. “You don’t have to go there thinking what’s it going to be like, what it’s going to be about anymore. So we changed quite a bit. There was some stuff we needed to work on from my skill set side; not a massive amount of stuff, just things we needed to do better to be competitive, and we worked really hard on those. We made sure that we plugged the holes, and we’re ready to win; we’re not ready to just come and compete.”