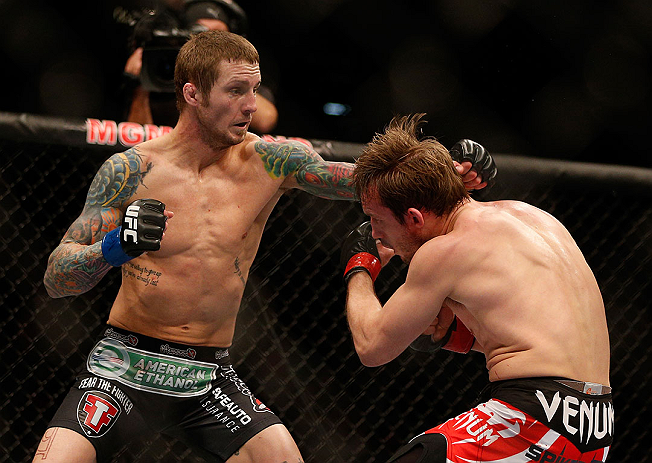 Many of the WEC fighters that have transitioned to the UFC still carry a chip on their shoulders, especially the athletes that competed from lightweight down, when the organization was gaining some attention, but remained buried in the shadow of the biggest company in the sport.

Each time they step into the cage, they’re looking to remind everyone watching – and those that doubted the company that used the little blue cage – that competing outside of the UFC is the only thing that was limiting them from being regarded as elite fighters in their respective weight classes.

Eddie Wineland’s ties to the organization go even deeper than that.

Past, Present, and Future

Before Zuffa purchased World Extreme Cagefighting – when they were just another regional promotion, holding events at the Tachi Palace Hotel & Casino in Lemoore, California – the Chesterton, Indiana native showed up and stopped Antonio Banuelos to become the first bantamweight champion in the company’s history.

That championship now rests around the waist of Dominick Cruz, and seven years after winning the title, the 29-year-old veteran can move one step closer to bringing things full circle when he faces off with interim UFC bantamweight champion Renan Barao in the co-main event of UFC 165 this weekend in Toronto.

“It’s everything – everything in the sport we’re involved in (is done towards winning) the UFC belt,” admitted Wineland, who carries a 20-8-1 record into his showdown with the 32-1, 1 NC Barao Saturday night. “I held the first WEC belt, and at the time, I didn’t really know what it was until I got home and realized what I had accomplished. It (winning the UFC belt) would be a culmination of 10 years of hard work, and it’s what everybody in MMA strives for.

“Only a handful of people get to fight for a UFC belt. I’ve put my time in, I’ve been working, and 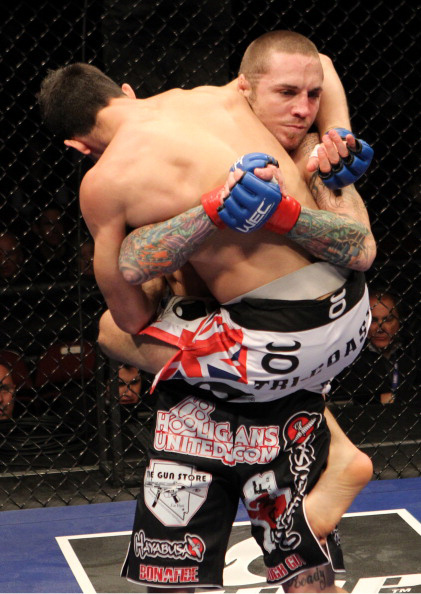 they’ve granted me a shot, so to win that belt would be like a homecoming.”

The bantamweights were initially scheduled to square off at UFC 161 in Winnipeg, but an injury forced the interim titleholder to withdraw just weeks before the contest, prompting a crushed Wineland to tell UFC Tonight  “it’s like dangling a piece of cake in front of a fat kid for months, and then not letting him eat it.”

This weekend, that kid gets a chance to enjoy that cake, and as much as the delay was tough to deal with initially, the challenger quickly found a silver lining to the three-month delay that moved this bout 1,300-plus miles east.

After entering the UFC on a four-fight winning streak – a run that culminated with back-to-back Knockout of the Night performances against Will Campuzano and Ken Stone – Wineland jumped into the deep end of the bantamweight division, dropping consecutive contests to Team Alpha Male’s Urijah Faber and Joseph Benavidez.

He’s bounced back with victories over perennial contenders Scott Jorgensen and Brad Pickett to arrive at this point, showing significant improvements between his second two appearances and his first two trips into the Octagon.

Wineland points to a change in mindset for helping him right the ship, and he plans on carrying that same approach into the cage when he squares off with Barao in the penultimate pairing at UFC 165. 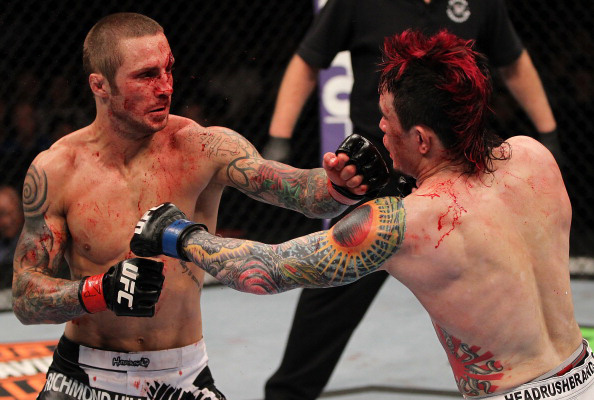 “A lot of people, when they get mad - when they fight mad - they start making mistakes. When I get mad, I start fighting better. Everything is right where it needs to be, everything is spot on. In sparring, they tag me a couple times, and my trainer sees the change in my face, and I can hear whoever is watching say, `Oh, here we go.’ You can see the change in my demeanor, and that’s when I’m on point.”

As he looks to bring his career full circle and claim a portion of the championship belt he held earlier in his career, Wineland has gone back to his old look in advance of Saturday’s contest.

After rocking a handlebar mustache and short, slicked hair for the last several months, he’s back to being clean-shaven and baring close resemblance to the heavy-handed boxer that dominated the action against Pickett and Jorgensen.

“It’s been gone for about three weeks now. It was time to go,” he admitted with a laugh. “I’ve never fought with a mustache before, and I liked it – I’ll always be a handlebar mustache fan. It was weird, but as soon as I shaved it off, I immediately felt faster, stronger – everything felt like it was right back where it needed to be. I shaved my head, shaved my mustache, and I was the old Eddie again.”

And “The Old Eddie” is confident that he’ll get back to a place where he was once before this weekend.