Wineland to Caraway: "You Wanted It, Now You Got It" 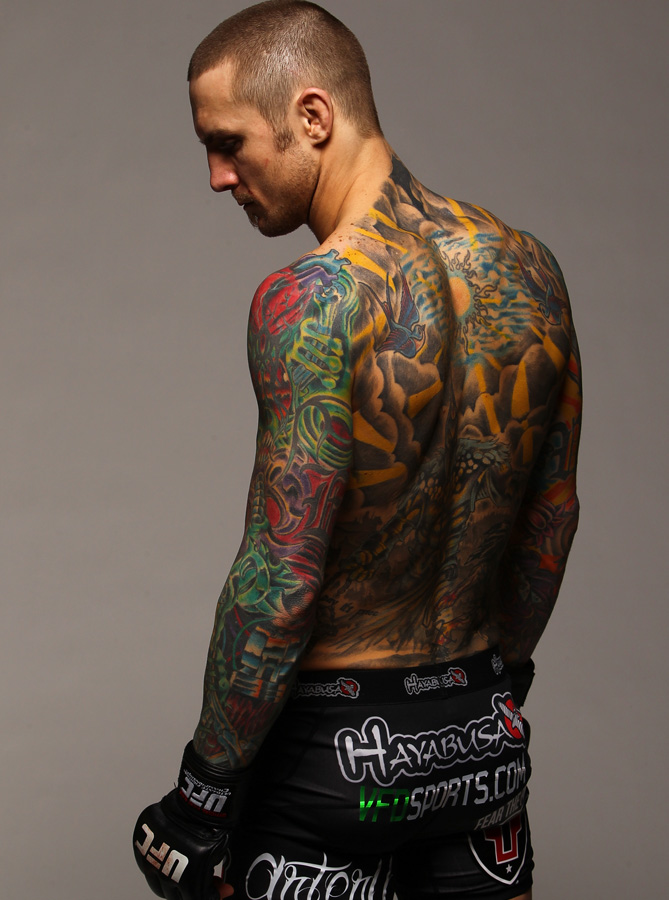 Bantamweight veteran Eddie Wineland is fired up when he picks up the phone.
Normally, you get through the pleasantries – the “thanks for taking the time, really looking forward to this fight” opening back-and-forth of an interview – with robotic precision, but this time around, the 31-year-old from Chesterton, Indiana has no interest in the formalities.

Fourteen months ago, Wineland had his jaw broken by Johnny Eduardo, the Brazilian pulling off one of the biggest upsets of the year and sending the first bantamweight champion in WEC history to the sidelines for a long recovery and an even longer period of wondering if it was time to call it quits.

Wineland’s in a different position than many of his contemporaries – he works full-time as a firefighter and doesn’t need to fight in order to make ends meet. Stepping into the Octagon is about competition, about testing himself and seeing who is the better man once the cage door closes. It’s a passion that he’s pursued for more than a decade, but after this latest setback, he wasn’t sure if he wanted to put on his four-ounce gloves ever again.

Truth be told, Wineland was leaning towards retirement.

“I broke my jaw before in 2004 and I did the same thing and went through the exact same thing. I think I was making three or four hundred bucks a fight – so this was back before fighting was the cool thing to do,” the 32-fight veteran who started his career by going 3-4-1 in his first eight fights, laughs. “I broke my jaw, got a $300 check, came home and luckily I had insurance through my other job, but it wasn’t worth it to me. A little time went by, I’d sit in the stands and watch my buddies fight and I started getting that itch again.

“It was kind of the same thing again. I broke my jaw. I’m laid up. I’m miserable. I’m eating through a straw. A little bit of time goes by and I miss it, but I’m content with walking away. I’ve done what I’ve done and done a lot more than a lot of people will do in the sport, my son’s born and it’s a good time in my life.

“But the competitor in me wants to keep going,” he adds. “And with having my son, I want to show him that there are going to be bumps and bruises and you’re going to get knocked down – that life doesn’t always go as planned – but as long as you keep putting one foot in front of the other, good things are going to happen.”

Once he decided to return, Wineland knew exactly whom he wanted to fight and set out on a campaign to make it happen, blowing up UFC matchmaker Sean Shelby’s phone and taking to social media to try to draw a reaction out of his desired opponent.

On May 22, it was announced that Wineland got his wish and would be taking on Ultimate Fighter alum Bryan Caraway as part of this weekend’s UFC on FOX event at the United Center in Chicago.

“He put a bitter taste in my mouth a year ago,” Wineland says in regards to his dogged pursuit of a fight with Caraway. “He called me out two months after I broke my jaw. I had done an interview stating that I might be done and then he comes out and says, ‘I’d like to fight Eddie Wineland or Michael McDonald.’ So he calls out two people who are injured; two people who are defenseless. That to me says, ‘I’m a coward.’

“I had to try and ruffle some feathers with the ‘Mr. Tate’ and ‘Mr. Cupcake’ (comments on social media),” he adds, the names referencing Caraway’s long-term relationship with women’s bantamweight contender Miesha Tate, who takes on Jessica Eye in the co-main event of Saturday’s fight card on FOX. “I had to try to get his attention somehow. I don’t think it worked because I don’t think I ever got a response out of him, but he agreed to fight.” 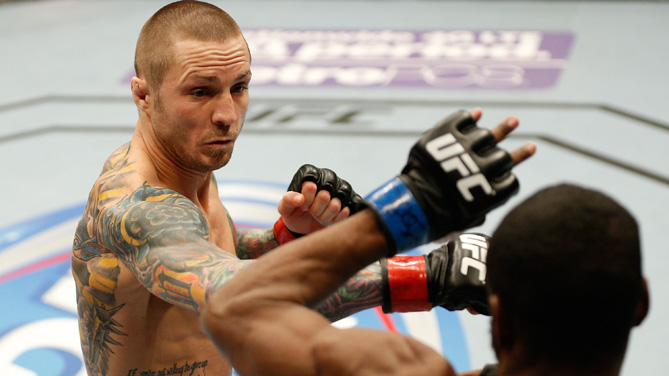 Yves Jabouin during their bantamweight fight at the FOX UFC Saturday event at the United Center on January 25, 2014 in Chicago, Illinois. (Photo by Josh Hedges/Zuffa LLC)" align="right" />And after more than a year on the sidelines and taking a good, hard look at hanging up his gloves permanently, the perennial contender is pretty fired up about getting back into the cage and reminding everyone of what he’s capable of on Saturday night.

“I’m a little older, but I’m still wearing out the 21-year-olds in the gym,” Wineland laughs, having prepped for Saturday’s return with UFC featherweight contender Darren Elkins and the rest of the team at Duneland Vale Tudo. “As you get older, you work smarter, not harder. I feel like I’m in better shape now than I was at 21. I don’t have to beat my head against the bricks every single day.

“I listen to my body. If I need a rest day, I take a rest day. I can train three days in a row at 50 percent or I can take a day off and train 100 percent. You take what works, throw away what doesn’t and you learn from your previous mistakes.

“I’m so motivated; it’s like it’s my first fight in the UFC,” he adds, the excitement evident in his voice. “In that first fight, everybody wants to prove themselves and everybody wants to put on a good show so they can hang around. I’ve been training harder for this fight than I have my last ones. I’m in a good place mentally and emotionally. Everything is falling into place.

And he’s got a special message for his opponent as well.