Wineland: Always There to Put on a Show

"I
always have something to prove. I want to show everyone I’m the best
when I go out there and that I do possess the skills to hold that belt." - Eddie Wineland 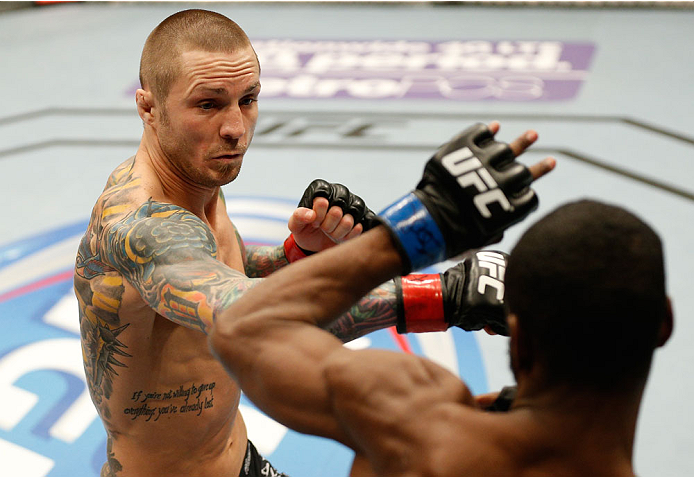 There is always something to prove inside the Octagon…at least where Eddie Wineland is concerned.

The seasoned veteran has spent years battling the opposition under the Zuffa banner and has carved out his place as one of the best bantamweight fighters on the roster in the process. That said, the Chesterton native has experienced his fair share of ups and downs, as he has strung together multiple winning streaks, only to have the progress he built stopped cold.

While the Northwest Indiana-based fighter has taken his proverbial knocks on several occasions, nothing has stopped the 29-year-old from getting back to his feet and dusting himself off. His ability to not only regain his footing but surge back toward the top of the division has earned Wineland the reputation of being one of the most resilient fighters in the bantamweight ranks.

There was no period in his career where this was more on display then in the aftermath of his loss to Joseph Benavidez back in August of 2011. It was his second consecutive setback, but it was also the first time in nearly a decade he had to deal with having notched “L’s” in back-to-back showings. With as many years as Wineland had under his belt in that position, he could have crumbled to the doubt that lingered in the aftermath of his bout in Milwaukee, but that’s not how Wineland is wired.

The former WEC bantamweight champion returned better than ever to collect back-to-back victories and earn a shot at the UFC bantamweight title. While his tilt with Renan Barao at UFC 165 last September didn’t yield the results he was seeking, it put the resurgent veteran on the comeback trail once again.

The first obstacle standing in his way was a fellow seasoned scrapper in Yves Jabouin. The two men stepped into the Octagon when the UFC returned to Chicago to kick off the 2014 campaign and Wineland put on a show for the fans in his home region. After battering Jabouin in the latter part of the opening round, Wineland finished the job in the second round. With the TKO stoppage victory, Wineland not only put himself back on track, but reignited the momentum he had built prior to his title shot.

“I was very happy with my performance in that fight,” Wineland said. “I worked our game plan perfectly. Our goal was not to allow him to take a step forward and keep the pressure on. I knew if I could keep him moving backwards and not let him get any of his kicks off; things were going to work out very well. That’s what happened and I came out with the win.

“I train for every fight like it’s the toughest guy in the world and I carry the same mentality into the fight on fight night. But in a sense, I always have something to prove. I want to show everyone I’m the best when I go out there and that I do possess the skills to hold that belt.”

With a victory over Jabouin being his third win in his last four outings, Wineland was almost guaranteed a fight against another top contender. Nevertheless, the current scene in the bantamweight division is somewhat in flux, as champion Renan Barao has run through nearly every fighter in the contender’s tier at 135 pounds.

In addition to there being a shortage of contenders, other top bantamweights like Urijah Faber and Dominick Cruz were unavailable to throw down, so Wineland was forced to work with what the UFC gave him. The promotion selected Johnny Eduardo to face the former title contender and the two men will square off next Saturday at UFC Fight Night in Cincinnati, Ohio. While Wineland wasn’t initially excited to be a facing an opponent outside of the divisional top 10, he’s a professional through and through, and he has every intention of showing up and giving the fans an exciting fight, no matter where the risk/reward needle falls.

“In the beginning I wasn’t very happy with it,” Wineland explained about the matchup. “I would much rather face a guy who has a number by his name that would move me forward with a victory, but at the end of the day, I have a fight I signed up for. He’s a tough opponent and I’m not overlooking him by any means. We are going to come prepared to get the win. This fight keeps me active and keeps me busy.

“I don’t want to say it’s a lose/lose situation, but I’m not sure what to call it. If I beat him then I’m the favorite and it is something I was supposed to do. But if for some reason he gets that lucky shot and takes me out, then his position skyrockets and that drops me way down the ladder.”

Where Wineland should have advantages in several categories when comparing the two fighters on paper, one column he will have a definitive edge comes in the experience factor. Eduardo has only fought under the UFC banner on two occasions, with one of those bouts resulting in a loss to current contender Raphael Assuncao in his promotional debut back in 2011.

While Eduardo would pick up a victory in his next outing, his win over Jeff Curran was a long time ago by modern standards. When he steps into face Wineland, it will come in just shy of two years for the Brazilian, as he’s been on the sidelines for a lengthy stint due to injury.

Nevertheless, there isn’t anything about Eduardo that Wineland is taking lightly and he believes he’s prepared properly to put on a show in Cincinnati.

“I’m ready to do what I have to do and I’m well prepared. I don’t think there is any secret that when I get into the cage everyone is in for a special treat. Without the fans this sport is nothing and they can expect me to put on the best show that I can for them. I want to entertain them so they want to keep watching me fight. That’s what I go out there to do and this fight isn’t going to be any different.

“I think I’m going to be stronger and faster in this fight. I know he has a good jiu-jitsu game, but that means absolutely nothing when you are getting hit in the face.”