With win streak, Jingliang feels more pressure than ever 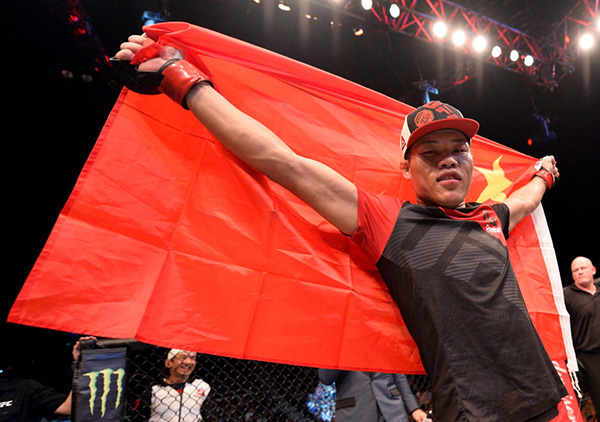 Li Jingliang of China celebrates after his decision victory over Frank Camacho of the Northern Mariana Islands in their welterweight bout during the UFC Fight Night event at the Singapore Indoor Stadium on June 17, 2017 in Singapore. (Photo by Brandon Magnus/Zuffa LLC)" align="center" />It’s almost eight years to the day since Li Jingliang last fought in Mainland China. That road streak ends this Saturday when he faces Zak Ottow in the co-main event of UFC Shanghai, and it’s not just an opportunity for “The Leech” to extend his current win streak to four, but to reflect on where he’s been in the years after that 2009 fight with Yun Tao Gong.

“I always believed one day I would fight on the Mainland again, and I didn’t wait for long,” Li said through a translator. “November 25th, not only myself but also a lot of other Chinese fighters, we will show the world our China power.”

Li is the flag bearer for his nation in the UFC, clearly the most accomplished Chinese fighter to compete in the Octagon. That comes with the usual perks, but it’s not all glory for the 29-year-old.

“I became more famous than before,” he said of how life has changed since his first UFC bout in 2014. “People recognize me on the street and I have more fans. At the same time, there is more pressure on your shoulders.”

RELATED: Start your free trial of FIGHT PASS now so you can see the exclusive Fight Night Shanghai event!

More pressure to succeed, not just for himself, but for his peers, several of whom make their Octagon debut this weekend. In fact, seven Chinese newcomers make the walk with Li at Mercedes Benz Arena, setting the stage for bigger and better things for the MMA scene in China in the coming years.

“UFC sees the potential of the China market,” Li said. “Through PPTV’s broadcasting over the years, UFC has more and more fans in China. And the UFC also gives Chinese fighters the opportunities to train at the best MMA camps in the world for six months. We will not let UFC down.”

With all that said, it’s obvious that a lot of the responsibility for leading the charge falls on Li, who could point to his humility and team-first attitude as the secrets to his success and ability to handle such responsibility.

“A lot of people supported me through these years, and they are my motivation to stay consistent at the top,” he said. “I would not be who I am if my team, China Top Team, my family and my fans didn’t support me over and over again. They made huge sacrifices for me.”

In response, Li has put in the work in the gym and on fight night, compiling a 5-2 UFC record that includes three knockouts and a recent Fight of the Night bonus for his victory over Frank Camacho. This run has built him a growing fan base, not just at home, but around the globe.

“Every fighter that steps into the Octagon, they want to win the fight,” he said. “The desire for victory makes the fight exciting. No matter win or lose, you need to give everything you have in the Octagon.”

Li has, and now he’s on the upswing of his career because of it. That doesn’t mean it’s been easy getting here, but he’s determined that this is just the beginning.

“I’ve been through a lot of stuff all these years, the joys and sorrows of life,” he said. “But I have a dream. I want to win the UFC championship, and I want to bring a good life to my family. These things drive me to conquer everything. Life is getting better and better every day, and the future should be even better.”