With A Win over Yahya, "Money" Mendes Can Cash In

"I’m loving all this. I never would have thought that at 26 years old I’d be fighting in the UFC and would be on TV, so it’s great." - Chad Mendes 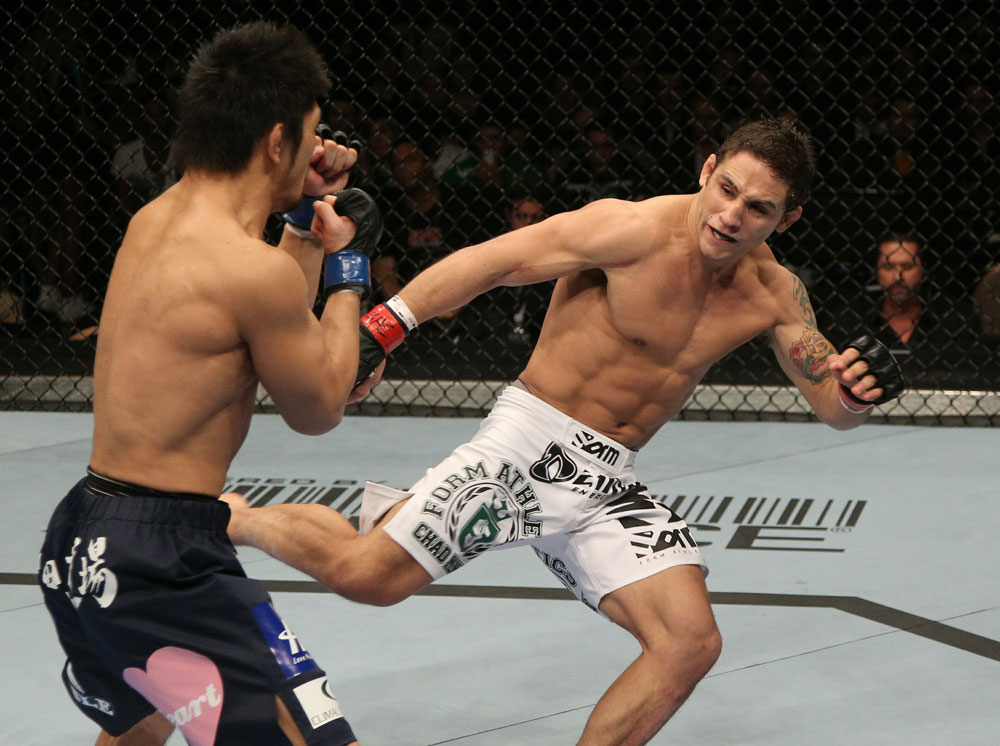 It’s the calm before the storm for Chad Mendes. Literally. For a brief spell, two weeks before the featherweight contender steps into the Octagon to face Rani Yahya at UFC 133 in Philadelphia, he leaves the gym and just gets away, forgetting about the madness that can consume a fighter if he’s not careful.

“What I like to do to clear my mind is get out to the outdoors,” he said. “I’m a huge outdoorsman – I love fishing, hunting, and camping, and that helps clear my mind. It’s just peace and quiet, and I don’t think about anything except what I’m doing there, and that’s one thing that really helps me.”

Just 26 years old, if Mendes sounds like an old soul who’s got everything figured out, consider that he’s been competing in one way, shape, or form since he was five years old. When you do anything that long, you get into a rhythm and a set routine built by trial and error, but you also run the risk of burnout. Mendes has those days just like everyone else, but he pushes through.

And when it’s not necessary to grind through a rough week of training, it’s time for a trip to the great outdoors to regroup and unwind. It’s a life few understand, and it could make relationships almost impossible. But in his wife of nearly a year, Danielle, Mendes has found a kindred spirit.

“I’m lucky in the sense that she was an athlete too,” said Mendes, who will celebrate his first wedding anniversary with Danielle in September. “She was an athlete from when she was a little girl all the way up through college, so she definitely understands that side of it and the emotion and stuff that goes into it, and she’s always there to back me up.”

There is a catch though.

“One thing she cannot handle is blood,” laughs Mendes. “My fight with Erik Koch, he split me above my eye and I had blood all over my face and my body, and she had to turn away, she couldn’t watch it. But other than the blood, she’s totally cool about everything else.”

Danielle has also been at every one of her husband’s pro fights, and was even in attendance for all of his senior year wrestling matches at Cal-Poly. Well, all except one, his 5-2 decision loss to J Jaggers in the 2008 NCAA Championship tournament. So considering that Mendes was 30-0 in wrestling and is 10-0 in MMA with his bride in the building, “I like to think of her as my good luck.”

Not that he’s needed much luck thus far in his MMA career. A pro since 2008, Mendes rightfully entered the sport with plenty of hype, considering his impressive college wrestling credentials (he was a two-time All-American and Pac-10 champ), and he’s delivered on his promise thus far, going 5-0 on the local circuit before a 4-0 stint in the WEC where his victims included Koch, Cub Swanson, and Javier Vazquez. In February, he made his UFC debut with a win over longtime Japanese standout Michihiro Omigawa, yet as the spotlight on him glows brighter, he takes everything in stride and actually appears to be enjoying the ride.

“Obviously the belt is the ultimate goal and it’s what all of us in this sport train for and it’s what we’re going after,” he explains. “But it’s not the only reward for me. Competing is a huge reward, I’ve been doing it continuously since I was five years old, and I don’t know if I could not compete. I think I’d go nuts. So I love my job. I get to hang out with all my buddies all the time, I get to travel all over the world, I get to meet new people, I get to go on shows and do interviews, I get to do some autograph signings, and I never guessed in a million years that I’d be doing all this stuff in my life. I’m enjoying it.”

If you never thought you would read a quote from a pro athlete declaring that he enjoys doing interviews, you just did.

“The day you stop getting interviews is when you gotta worry.”

And he really is, to use the newest cliché, living the dream.

“I got to hang out with Urijah (Faber) even before I started fighting, I went to a couple of his fights, and just got to see what was in store and what was gonna be expected,” said Mendes. “So it was something I kinda got a glimpse at before I even got to do it. So coming off the college career, I was excited to get in there and be a part of all this stuff. I’m loving all this. I never would have thought that at 26 years old I’d be fighting in the UFC and would be on TV, so it’s great. It’s a humbling experience and I’m enjoying it.”

So when speculation ran rampant earlier this year that he was going to get a shot at UFC featherweight champion Jose Aldo’s title, but instead saw Kenny Florian get that opportunity, Mendes didn’t lose a wink of sleep over it and he didn’t opt to wait on the sidelines for his title fight. He took the Yahya fight and got back to work.

“The whole Aldo thing was never official,” he said. “I never had a contract in front of me to sign. It was something we were hoping for but I knew that anything could happen; it just didn’t happen for me. Basically I didn’t want to wait the nine months to possibly fight him because I knew with Florian fighting in the meantime, that there was a good chance that if he performed well, (UFC President) Dana (White) would give him the fight. That was probably the biggest rollercoaster, but once we got the contract in front of me with Yahya, that’s what I decided to do, and it was back in work mode and back in the gym training and not even thinking about Aldo’s style anymore. It was all Yahya.”

That’s not to say the Californian wasn’t watching closely as Aldo defended his crown against Mark Hominick in April and Florian made a successful 145-pound debut against Diego Nunes in June. In fact, there probably wasn’t anyone observing the two bouts more intently.

“It just goes to show how many tough guys there are in this division,” said Mendes. “Both guys had tough opponents, and both guys got tested, but they both have a champion’s mentality because they found a way to win. That’s something you have to have to go far in this sport, and I think they both have it.”

“With Aldo, that was a great fight for me to see,” he continues. “It just proves my whole point about the difference between grappling and standup cardio. You could see that he was forcing shots and trying to take it to the ground, and it wore him out. That’s my bread and butter and what I’d try to do if I ever fought him. With Florian, that was his first fight at ’45, so we didn’t know what to expect, and I thought he looked pretty good. He came out and looked a little sluggish in the first round, and that could have just been from the weight cut, but he’s got the mind of a champion, so he came back and found a way to win.”

Mendes is obviously antsy to get his own shot at the winner of October’s Aldo vs. Florian bout, but he won’t be seeing either featherweight standout anytime soon if he doesn’t get by jiu-jitsu ace Yahya, who returned to 145 pounds in January after a long run at bantamweight, and defeated former WEC champ Mike Brown. So in a way, facing a man who has submitted 14 of the 16 men he’s defeated is Chad Mendes’ title shot. At least for the moment.

“For this camp we have been doing a lot of wrestling and the reason why is because honestly I’d like to keep this fight standing as much as possible,” he said. “But there’s two different type of cardio – there’s standup cardio and there’s grappling, squeezing, and wrestling cardio, and they’re completely different. So I’m preparing for his best place, and if I feel great in that area, I’m gonna be very confident with my standup. So we’re doing a lot of wrestling and a lot of grappling for this camp, I’m feeling great, and it’s been one of the best camps I’ve had so far. I want to be prepared for the worst, so that way I can have my best performance. I’m not looking past Yahya at all. I’m training hard and I gotta get in there and win this fight.”