Win Or Lose, Jordan Espinosa Is Comfortable In the Octagon And Living His Best Life 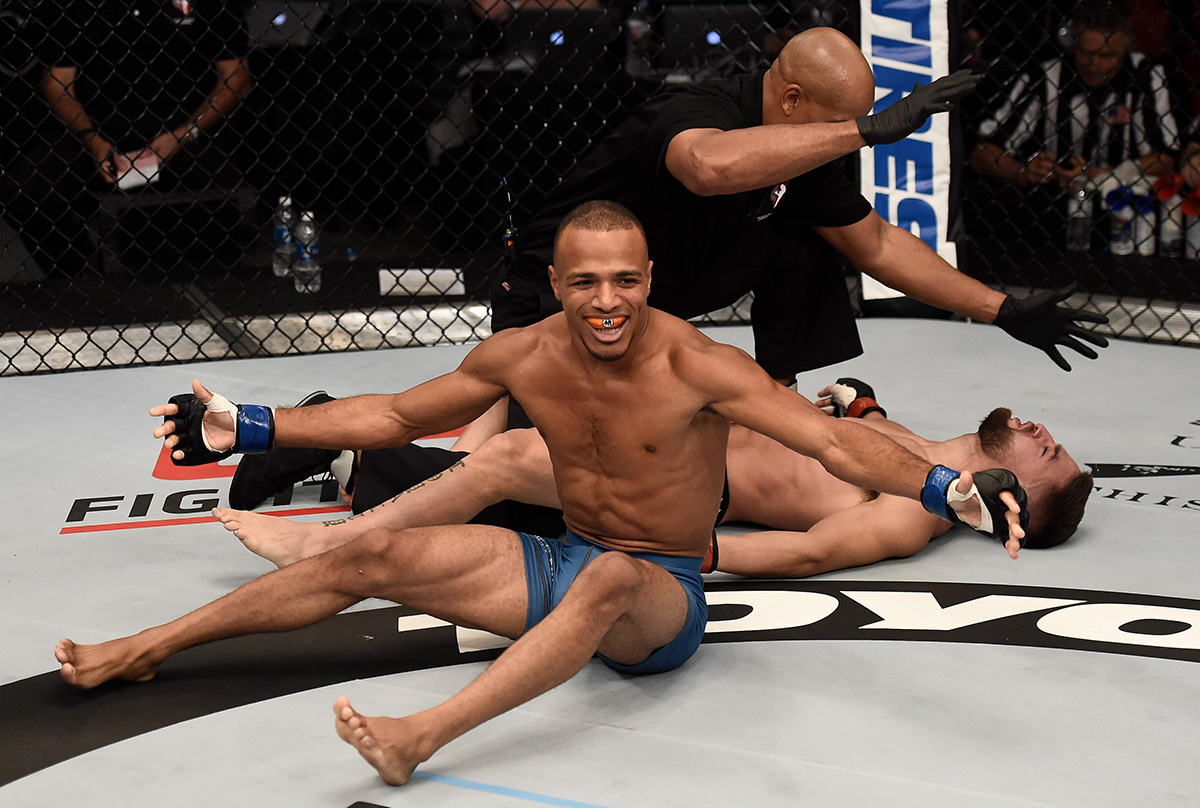 Jordan Espinosa celebrates after his submission victory over Nick Urso in their flyweight bout during Dana White's Tuesday Night Contender Series at the TUF Gym on August 22, 2017 in Las Vegas, Nevada. (Photo by Brandon Magnus/DWTNCS)" align="center" /> The dream opportunity went just as planned for Jordan Espinosa. Not only did he defeat a heated rival in Nick Urso, but he did it in 83 seconds in front of UFC President Dana White and matchmakers Sean Shelby and Mick Maynard.

But there would be no UFC contract for Espinosa that night. And he was okay with that.

“To be completely honest, I wasn’t really bummed out,” he said. “I was super happy just because me and that opponent had had history and I was happy to get the win. I did everything in my power to try and secure a contract, but that decision wasn’t up to me. So I focused on what I could control, and every time I go out there, I just try to improve and put on a good performance, and I did that.”

That maturity is rare in any walk of life, especially in prizefighting, where the opportunities aren’t always there for fighters that start their career at 4-4. In boxing, a record like that is a death sentence. It’s not necessarily the same in MMA, but there are fewer allowances for setbacks, and Espinosa knew it. So he had to dig even deeper to put together the kind of winning streak that would earn him a look from the UFC, and when you couple that with the outside pressure from friends and family, there was a lot for the New Mexico product to wade through.

“I have a computer engineering degree and I’ve had it for six years now and I haven’t used it at all because I decided I wanted to pursue my MMA career,” he said. “So everyone around me, including my parents, were wondering what I was doing. That’s where the scrutiny came from the outside. Internally, I put so much pressure on myself. At one point, I had a 4-4 record and in my own head I wondered whether I should even continue.”

Do what you love #LuttrellYeeMMA #ContenderSeries #DWTNCS #MMA #Flyweight #UFC
A post shared by Jordan Espinosa (@statechamp_103) on Aug 11, 2018 at 10:24am PDT

Espinosa, a decorated high school wrestler, eventually started to put wins together consistently, but after a controversial no contest in his first bout with Urso in February 2016, he had reached a crossroads.

“I was putting all my eggs in one basket and fighting was everything,” Espinosa said. “Then I had a mentality switch after the first Nick Urso fight. After that, I was like, ‘Why the hell am I doing this? Why did I start, why did I get into this?’ To have fun and enjoy it and to enjoy life. If I’m doing this and hating it, there’s no point in even doing it. So now I have the mentality that, win or lose, it’s not the biggest deal in the world. There’s a lot more important things in life than fighting. So now, I’ve learned to enjoy the process and the journey instead of worrying about the results so much. And since I had that mentality switch, things have fallen into place.”

After that first clash, Espinosa went 3-1, then beat Urso on Dana White’s Tuesday Night Contender Series. He didn’t get the UFC contract that night, but after beating CJ Hamilton in March, he was back on DWTNCS in July. This time, he stopped Rilley Dutro in the third around, and when the dust settled, he got signed to the UFC.

#tbt to the biggest night of my mma career thus far! That big smile on my face stayed that way for several days... so fortunate to have an amazing team and support system that believe in me and have allowed me to take this journey for the past 10 years. Still more to come! #LuttrellYeeMMA #ContenderSeries #DWTNCS #UFC #MMA #Flyweight #ABQ #Vegas
A post shared by Jordan Espinosa (@statechamp_103) on Aug 16, 2018 at 8:36pm PDT

“I wasn’t too concerned about making it to the UFC,” he said. “I really just wanted to put on a good performance every fight, and if I were to continue to do that, UFC would come, and it did. So I’m super grateful. I think if I had gone 5-0 or 6-0 and got into the UFC, if I’m being completely honest, I didn’t even feel comfortable in the cage until anywhere from my seventh to tenth pro fight, especially with my striking. Most of my fights have ended by choke in a minute and a half, but my striking game wasn’t there and my level of comfort and composure wasn’t there. Everyone has their own little journey they have to take and some people get there faster than others.”
But he’s here now, 28 years old and ready to take on the flyweight division’s best.

“I’m excited just to challenge myself with the top flyweights in the world,” he said. “That’s fun to me and that motivates me.”