Wiman Comfortable with the Odds This Saturday 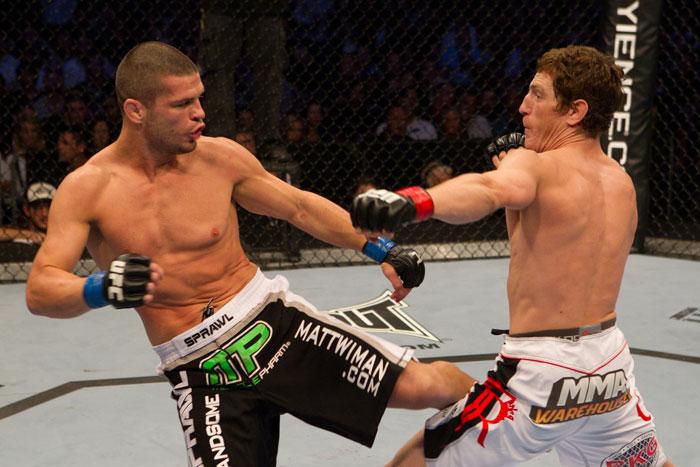 Matt Wiman had left the building. Literally. Moments after his razor-thin decision loss to Dennis Siver in July, the Colorado native decided that he wasn’t going to stick around for any of the usual post-fight pleasantries. So he stormed out of the Octagon and just kept on going until he was outside the MGM Grand in Las Vegas.

“I went outside to where I almost got lost because I kept running,” he said, chuckling about it now. “It crossed my mind to just leave. I had heard that (former UFC lightweight champion) Sean Sherk had done that one time, and I really respected him for it. (Laughs) They said he ran back to his hotel, and I was gonna just leave and hope that everybody knew that I was fine and meet up with them later. But out of respect for my cornermen and everybody else, I just came back.”

He must have gotten some funny looks walking through the casino, right?

“I don’t think anyone wanted to make eye contact with me.”

That was probably a good thing, considering that Wiman was more than a bit heated following 15 minutes with Germany’s Siver. Thinking back, he says the impulsive run was more of a self-preservation move than anything else.

“It’s one of those things where I’m like ‘what was I doing?’” he said. “It’s something you just don’t think about. I think what I wanted to do was get the hell out of there. As soon as I felt like I was screwed, I didn’t want to talk to anybody or lose my temper or embarrass myself. I knew I needed a moment alone. I ran outside and had that moment alone and was able to think about my family and friends, and I wanted to be okay for them. I didn’t want them to worry about me. I said ‘I’m fine, it is what it is, and I’ll survive.’”

Wiman even met up with Siver later that night, and he made it clear to his foe that the post-fight outburst and some pre-fight heat was nothing personal. It’s just the way he gets ready for what is, in reality, a fight.

“He (Siver) is a really nice guy,” said Wiman. “I could tell he thought that I was mad and he wanted to respect my space, and I didn’t want to be friendly with him before the fight out of respect for the fight. I don’t like those guys that are buddy buddy and then they try to elbow your face in. It’s one of those things where I wanted to respect his distance and I wanted him to respect mine, but after the fight I wanted to let him know that I really respected him as a fighter and liked him as a fighter and that I was a big fan of his.”

When the dust settled, regardless of whether you thought Siver deserved the unanimous decision or that Wiman did enough to pull out the win, it was Wiman who left Vegas with a loss on his record, his first in over two years. A three fight winning streak was history, and the 28-year old had to begin his road to a title shot once again. How long does that take to get over?

“Maybe no time at all or maybe the rest of your life,” said Wiman. “It kinda comes and goes. Some days I think it doesn’t even matter and then some days I’m thinking that it changes everything. It does weigh on you, but it is what is, and I think what I have to keep my mind around is not playing ‘what ifs,’ and just deal with the cards that I’m dealt and only control what I can control. I think it’s better in the long run to go the hard route. It sucks, but if the chips always fall in your favor, you might have a different perspective on life and you might not appreciate things as much. I think that when things are difficult, it teaches you a lot more. I learn more from hard times and losses than I do from victories.”

He may come off as a free spirit who doesn’t let anything faze him, but Wiman is one of the more introspective fighters in the game, and when you take things as seriously as he does, losing a fight by one point on each of the three judges’ scorecards doesn’t just affect your won-loss record, but it touches everything around your career.

“I thought about all the momentum I had created, the money and glory I got screwed out of, but I just came to terms with the fact that the judges could have said I lost every round, they could have said that I was an awful fighter or a great fighter, and it doesn’t matter what other people say – it’s what you did and how you feel about yourself, and that’s all that matters. I was proud of my performance and I thought I beat him and did enough to earn the victory, and I guess at the end of the day, that’s the only thing that matters.”

Oddly enough, now Wiman knows how his opponent this Saturday in Washington, D.C., Mac Danzig, felt after their first bout in June of 2010. In that UFC 115 match, Wiman sunk in a guillotine choke and after a few seconds told referee Yves Lavigne that Danzig was unconscious. Lavigne believed him and stopped the fight. Danzig never lost consciousness, but the decision stood. Nearly 16 months later, they will meet again, both trying to erase the memory of controversial defeats that have stalled them in one way, shape, or form.

“I would say I took him down and submitted him completely, but in his defense, if I was in his shoes, I would have been pissed off too,” admits Wiman. “At the end of the day, I should have just been patient and kept squeezing. But now I have to redo my work.”

That could be a difficult thing, and Wiman will admit as much. But that’s just Matt being Matt. He’s honest to a fault, and he wears his heart on his sleeve. That could be seen as a problem by some, but would you rather see an emotionless robot in the Octagon, or a kid who goes in there, is willing to fight his heart out, and even tear out of the arena if things don’t go his way? I think I’d rather watch Matt Wiman. And as far as he’s concerned. Saturday night isn’t a rematch – it’s a whole new ballgame.

“I’m kinda treating it like we’ve never fought before,” said Wiman. “If you fight a fighter 10 times, the outcome’s gonna be different every time, but I think that I’ll beat Mac Danzig more times than he’ll beat me.”