"I’m new to the UFC, getting ready for my third fight, but I’m a veteran in the sport, so I think I’m going to fight someone with a big name soon, and I just want to perform at that level." - Wilson Reis 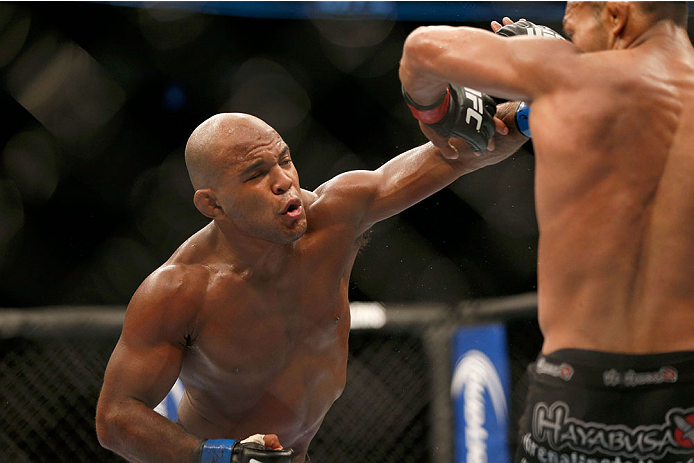 Wilson Reis may miss the cheesesteaks and pizza in Philadelphia, but one of the newest members of the Alliance MMA team in San Diego, knows it’s all for the greater good – not just for his fight career, but for his beltline as he makes the move to 125 pounds for this Saturday’s UFC Fight Night bout against late replacement Joby Sanchez.

“I knew going to 125 was just a matter of time,” the longtime bantamweight and featherweight standout said. “I’m 5-foot-4. I have good strength for my weight, but guys’ frame and size are getting too big. The last time I fought against Iuri (Alcantara), he was bigger and taller and had longer range, and it bothered me a little bit. More than the size though, because guys will be taller at flyweight as well, it’s the weight and the frame. I think at flyweight it will be better for me.”

Winner of five straight at bantamweight, a stretch that included a decision victory over Ivan Menjivar in his UFC debut in September of last year, Reis decided immediately after a close split decision defeat against Alcantara in February that he was heading south. And yes, giving up size and strength to opponents every night was the big reason, but it also didn’t hurt knowing that at 125 pounds, a couple wins can go a long way toward putting yourself in the title picture.

“The landscape of the 125-pound division is still a challenge as far as how good the fighters are, but it’s not as challenging as far as the number of fighters as it is in the 135-pound division,” Reis said. “So that was also something I considered going to 125. There will be less guys, especially now. Ali (Bagautinov) is out for a year, (John) Dodson is out, so there are a couple contenders who are going to be out and that’s a big shakeup.”

An even bigger shakeup will take place if Chris Cariaso upsets champion Demetrious Johnson at UFC 178 next month in Las Vegas, and it will likely prompt a mad rush for the top of the division, but Reis first has to get a win at 125 pounds. Initially, he was scheduled to fight number 11-ranked Timothy Elliott, but an injury scrapped him from this weekend’s bout. In stepped the unbeaten, but unheralded, Sanchez, who has a spotless 6-0 record but not the reputation of Elliott. In other words, a Reis win doesn’t do much to propel the veteran into the rankings.

He’s been in Sanchez’ position before though, and he know how dangerous a hungry young fighter can be because he was that fighter when he entered the pro MMA game in 2007.

“I’ve definitely been here a long time,” Reis explains. “When I started fighting MMA, I was already an accomplished black belt in Brazilian Jiu-Jitsu. I won a lot of titles in Brazilian Jiu-Jitsu and grappling, so that gave me a big resume to take into MMA and I jumped in with big competition right away.”

He’s not kidding. In his third pro fight he beat current flyweight contender Zach Makovsky. Two fights later he beat highly-ranked bantamweight Bryan Caraway, and he was off and running. Today, Reis is the owner of a 17-5 pro record and he’s still five months shy of his 30th birthday. That’s prime territory for the Minas Gerais native, and even though this is just his third UFC fight, he’s ahead of the curve in terms of big fight experience, something he credits to living in Philadelphia for the majority of his career.

“Most of my fights were over here because I live in the States and I fought the best guys,” he said. “Compared to some guys who come from Brazil right now, they start their career in Brazil and they have a big number of fights, but they haven’t fought on the big stage yet. I’ve been fighting on the big stage from my third fight, and that definitely helped me to get experience and everything.”

Now it’s time to put that experience to work against Sanchez and then the rest of the flyweight division. This Saturday’s fight isn’t the biggest in terms of attention or placement on the card, but it is the gateway for Wilson Reis to become a flyweight contender.

“I’m new to the UFC, getting ready for my third fight, but I’m a veteran in the sport, so I think I’m going to fight someone with a big name soon, and I just want to perform at that level.”