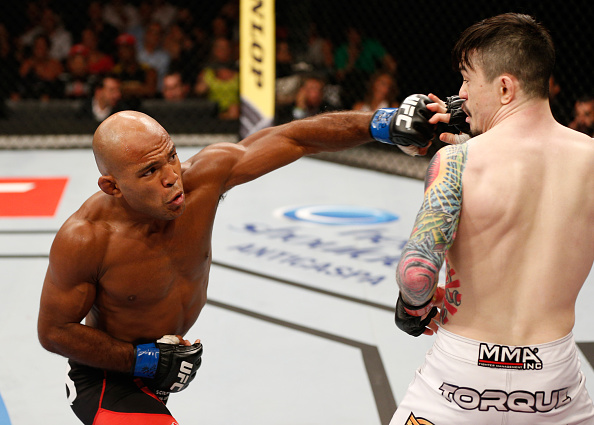 The greatest lesson Wilson Reis has learned about being in the fight game isn’t one he picked up in Jiu-Jitsu class back home in Brazil or in the Alliance MMA gym in his current home of San Diego. Instead, it came from a source of wisdom most look to when they need it the most:

“No matter what the situation, she says it will get better, you just have to work for it,” Reis said, smiling every step of the way. “As a person I’m super positive and I’m always like that. No matter what the circumstance is, I’m always positive and I always think there’s going to be a better day tomorrow. I got that from my mom. And sometimes I think about it – I do what I love to do, I do always did. I started Jiu-Jitsu in Brazil when I was 12 years old, and now I make a living with it and I can help my family and raise my family.”

That’s enough reason to smile, but if Reis needed any more, he can look no further than his meeting with fellow Brazilian Jussier Formiga this Saturday in Goiania. On a card filled with intriguing matchups, this may very well be the most important, as it pits the fourth-ranked flyweight in the world in Formiga against the 12th ranked Reis, who can make his case for inclusion in the title picture with a win.

“It’s an amazing fight, and the way I look at it, I’m two fights away from a title fight,” he said. “I’ve got to beat him and beat somebody else. So I’m excited for this fight. It might be the first time I’m fighting a real legit Jiu-Jitsu black belt that came from the same roots I did. We’re both so well-rounded and we’re been in the game for a long time, so this fight is good. We got the fight we wanted.”

Not many folks are calling for fights against the dangerous Formiga, but with eight years in the sport and a resume that has seen him fight and beat the likes of Zach Makovsky and Bryan Caraway even before making it to the Octagon, Reis is not in a position where he wants his career to marinate. He’s cooking right now, and in his physical prime at 30 and at his optimum weight class of 125 pounds - where he is 2-0 at the moment - he’s ready to go against anyone in the division.

“This is my eighth year in MMA and finally I was able to drop to my weight class that I belonged in my whole career,” Reis, who has competed at bantamweight and featherweight, said. “I’m 5-foot-4, so I knew eventually that I’d have to make the cut, but all the other fights I had helped me to prepare to drop to 125 at the best time. I feel great right now, I figured out how the diet and the weight cut works and I make 125 – not easily, but in a way that I will perform great on fight night. I don’t feel outsized no more, so it feels great to be in my natural weight class and able to give my best every fight.”

Reis, a Minas Gerais native, will be competing back home in Brazil for the second consecutive outing, and he returns with back-to-back victories over Joby Sanchez and Scott Jorgensen that have him feeling positive about his chances against Formiga and beyond. And with 24 fights already under his belt, there’s probably no better time than the present for him to make his move.

“I look back and I’m grateful,” he said. “When I got into MMA, I was in my third year as a black belt in Jiu-Jitsu and I was trying to decide if I should have a career just competing in Jiu-Jitsu and teaching classes, or if I was going to be a professional athlete like I always dreamed to be. I made the choice at the perfect time. I was 23, I was already training striking and I’m so glad that I made the decision then. I’m going into my 25th fight, I am in my prime now mentally and physically, I’m more mature as a fighter and as a person, and it’s exciting.”

In other words, call this the MMA version of a quote uttered by the wizard Gandalf in J.R.R. Tolkien’s The Lord of the Rings: “A wizard is never late, nor is he early, he arrives precisely when he means to.”

“I made the UFC at the right time,” Reis said. “I can’t say I made it here too early or too late; I made it at the perfect time.”

“It’s a great time in my life right now, outside and inside the cage, so there’s no reason not to be happy. Even if I’m not happy, I know it’s on the way.”