William Macario: A Phenom is Born 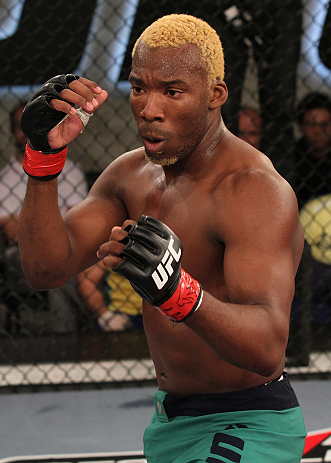 If we’re going by conventional wisdom, William “Patolino” Macario has no right making his UFC debut this Saturday night in Fortaleza, Brazil. Not at 21, not with just seven pro fights.

But here he is, a young man with poise beyond his years, one win away from a contract with the premier promotion in the sport of mixed martial arts heading into his Ultimate Fighter Brazil 2 final against Leonardo Santos.

“I always believed that I would get there,” said the Rio de Janeiro native. “I knew that it would happen fast, but the real situation is too exciting. I'm very happy.”

Macario’s enthusiasm for the sport and for life in general is consistent with that of his peers. His talent is not. To put together six wins on the local Brazilian circuit and then win four more bouts on TUF Brazil (three by knockout) marks him as something special. But it may be his humble attitude that impresses the most, as he is quick to deflect praise when asked about his rapid ascension in MMA.

“I started training young, and I was 14 years old when I first trained Muay Thai. I'm so lucky to have found excellent coaches like Pedro Silveira, Anderson Silvério, Zeilton Nenzão and Washingthai (Washington Luiz). Being part of this team helped me to use my talent and willpower in a correct way.”

A pro since 2010, Macario ended each of his first six bouts via knockout or submission, all but one finishing in the first round. But when the call to try out for TUF came, he knew it would be the truest test of whether he was ready for prime time or not. Wins over Roberto Barros, Thiago Santos, Tiago Alves, and Viscardi Andrade later, he proved that he was ready.

“It was amazing to be on The Ultimate Fighter,” he said. “I could learn a lot with the other fighters and the coaches and I think the best part was being part of a TV show that makes my job known by the public. Now it's hard to walk on the streets; everyone wants to talk to me and it's incredible how it makes me feel loved. The toughest part was being far from my family and friends for a long time. I've never spent so much time far away from them and I really missed them.”

Needless to say, the Macario family knew William’s sacrifice was for the best, and they’re enjoying their share of the spotlight as well.

“My family is having a lot of fun,” said Patolino. “Sunday night (when TUF Brazil 2 aired) turns into family time. Everyone gathers in front of the TV to watch the show and to cheer for me. And now they are idols in our neighborhood.”

If it ended today, the experience had a perfect ending for Macario, one he couldn’t have imagined back when he first put on the gloves seven years ago. Back then, his hero was Wanderlei Silva, and as the years went on, he added Anderson Silva to that list, along with a fighter he got to know well on TUF: coach Minotauro Nogueira.

“Minotauro is a legend,” said Macario. “Sometimes, we imagine that an idol is someone untouchable. But this experience showed me that he is a very simple man who worried about all of us and worked hard to help us to improve our techniques. Now, more than an idol, he is a big friend of mine.”

You would think things couldn’t get any better for the 21-year-old (just behind Max Holloway as the youngest fighter in the UFC), but there is still a fight to be fought on Saturday, and it happens to be against his Team Nogueira squad mate Leonardo Santos, who made his way to the final after the man who beat him in the semifinals, Santiago Pozinibbio, was injured and unable to continue.

“Obviously it's harder to fight someone that I've trained with,” admits Macario. “But we are professionals and if it's necessary, I have to pass through it. When I got in the house, I knew that this could happen, so I prepared myself to this moment. Leo Santos is a very tough guy and I really admire him a lot. But this is the chance of my life and I don’t want to lose it. I want to be the best, so to get there I have to face the best.”

He starts on Saturday.