Extremely motivated and driven, William Knight is ready to get the job done and become a real contender in the UFC's light heavyweight division.
By E. Spencer Kyte • Feb. 9, 2022

William Knight begins by apologizing for losing track of time and not answering his phone the first time I called. He quickly adds a second for the music in the background, which I can’t hear.

He explains that our interview time snuck up on him, arriving before he’d realized because he’s in the gym, in part because a couple weeks ago, the 33-year-old agreed to face Maxim Grishin on short notice this weekend at UFC 271 in Houston, replacing Ed Herman. But look at Knight and it wouldn’t surprise you if the streaking light heavyweight just listed “in the gym” as his permanent residence.

Knight is a compact bundle of kinetic energy and explosiveness; 205 pounds of muscle and power, speed and athleticism, crammed into a five-foot-10-inch frame, where it honestly feels like all those elements are primed to tear him apart from the inside all at once.

“I’m ready to go, man,” he said sharply, the quiet pleasantness of his introductory apologies replaced by excited intensity as he discusses Saturday’s matchup with the 37-year-old Grishin. “I train to fight; I don’t train to question myself. 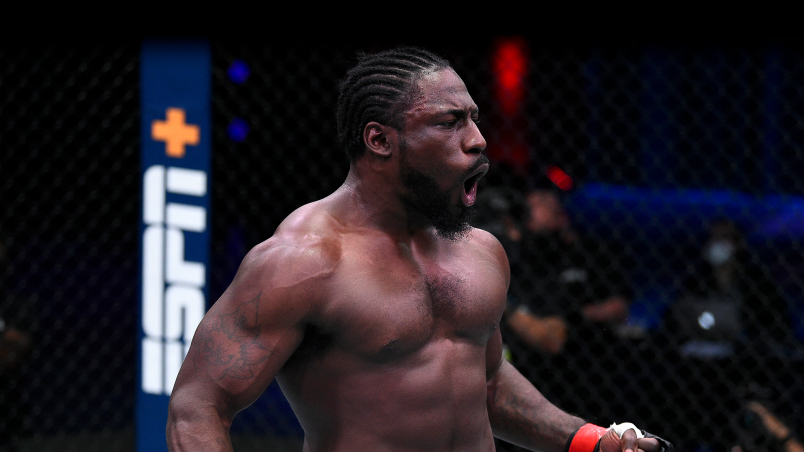 “When we get locked in the cage, you’ve got to answer to me,” he added with a bark. “None of that stuff puts fear in me. I don’t fear anything. I’m not worried about nothing. All I know is that I know what I’m capable of and you’ve got to be a crazy man to sign that contract if you see my name.”

Knight doesn’t see what he does through the same martial arts, professional athlete lenses that many of his contemporaries view themselves and what they do for a living. It’s far more binary to him — you can either fight or you can’t, nothing in between — and no matter the level or the platform, the mission is always the same. 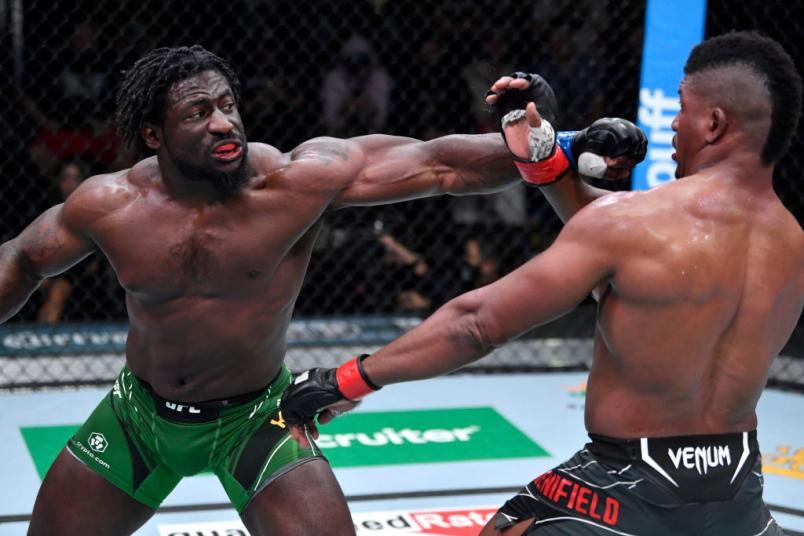 Training and fighting is just…” he began, trailing off as he searched for a way to communicate the very primal feelings he has about unarmed combat. “If you’re meant to do it, then you’re meant to do it, and if you’re not and you’re sitting here being like, ‘I’ve been doing this, that, and a third’ — don’t f****** do it.

“(Fighting in the UFC is) no different than the local scene; it’s just another human being in front of me that needs to be destroyed. I get there are different levels of fighting and different talents in each one, but, at the end of the day, I’m just there to f*** something up.”

It’s understandable that Knight feels this way, as he’s gone from making his pro debut to owning a 3-1 record inside the Octagon in the span of three-and-a-half years. 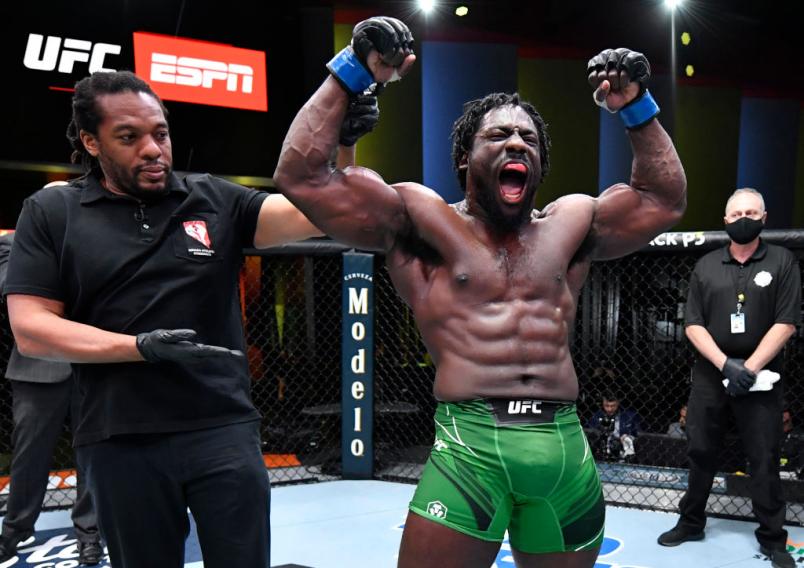 William Knight reacts after his victory over \Alonzo Menifield in their light heavyweight fight during the UFC Fight Night event at UFC APEX on December 04, 2021 in Las Vegas, Nevada. (Photo by Jeff Bottari/Zuffa LLC)

He made his first appearance on Dana White’s Contender Series in the summer of 2019, rallying to collect a third-round stoppage win over Herdem Alacabek, earning a developmental deal from the promotion for his efforts. He moved up to heavyweight and mauled Jamelle Jones before losing to future UFC competitor Tafon Nchukwi in a catchweight fight contested at 225 pounds.

Two months later, he returned to light heavyweight and finished veteran Rocky Edwards, then returned to Las Vegas in the fall, working through some early trouble against Cody Brundage to earn the finish before the midway point of the opening stanza. The effort earned him a contract, and since graduating to the Octagon, the Connecticut native has shown impressive flashes, especially over his last two fights.

Now he’s ready to test himself against Grishin, knowing a victory over the Russian veteran is another key step towards reaching the top of the heap.

“Me going against someone in that league? That is a veteran? That’s rewarding to me and I love it,” he said of facing Grishin, who has gone just 1-2 through his first three UFC appearances, but carries a 31-9 record with two no contest verdicts into their preliminary card matchup on Saturday night in Houston. “I like fighting seasoned vets — that tells me that I’m climbing up the ranks, faster than expected.

“At the end of the day, my goal is gold — UFC gold — and the only way to get there is to destroy everybody they put in my path, and that’s what I’m going to do.” 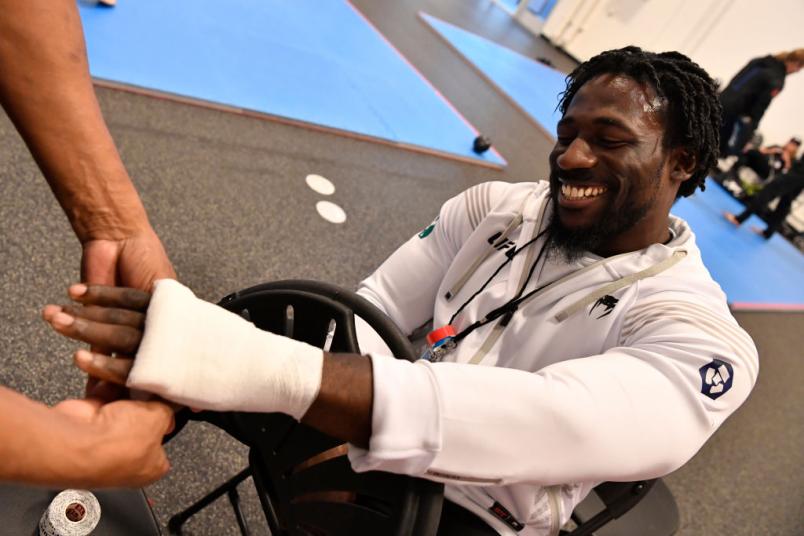 William Knight has his hands wrapped prior to his fight during the UFC Fight Night event at UFC APEX on December 04, 2021 in Las Vegas, Nevada. (Photo by Mike Roach/Zuffa LLC)

While he does have ambitions of winning the light heavyweight title, Knight isn’t someone that has short-term goals and long-term goals written down on pieces of paper and taped on the wall next to his bed like former WEC champ Urijah Faber used to do.

“I don’t do none of that,” he added, the word “none” shouldering the load. “It is what it is as it comes. Tomorrow is never guaranteed.

RELATED: Keep Up On All The News For The UFC's Light Heavy Weight Division Here

“God-willing, as long as I’m healthy after each fight, I’ll fight five times this year,” Knight answered, when asked about his outlook for 2022, the sharpness of his words dialed back from 11 to eight, but his passion still coming through loud and clear. “Just let me know when it is and I’m on it. I jumped on this because it was offered to me. 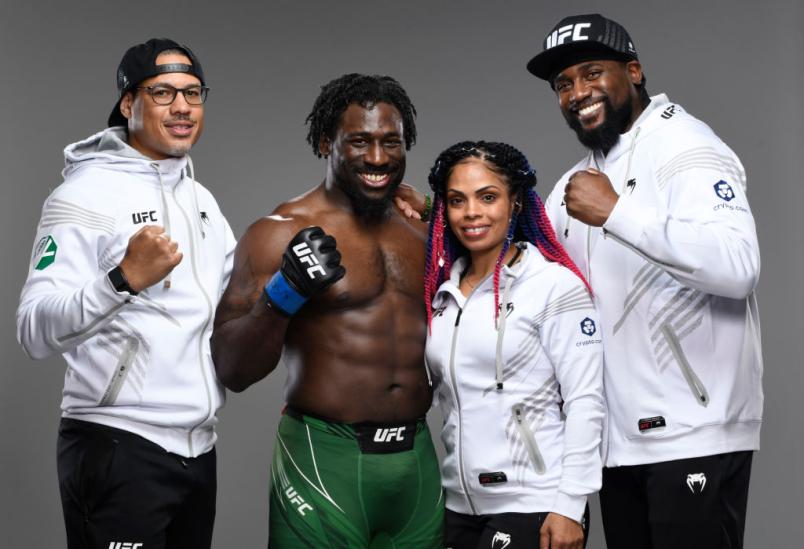 William Knight poses for a portrait after his victory during the UFC Fight Night event at UFC APEX on December 04, 2021 in Las Vegas, Nevada. (Photo by Mike Roach/Zuffa LLC)

You’re either a fighter or you’re not, and since Knight is undeniably a fighter, he accepted the assignment, and is approaching it with the same end goal in mind as always.

“I aim to knock these people out cold,” he said flatly, the first time since his initial apologies that he wasn’t at least somewhat amped up, making the declarative statement sound even more ominous. “Knockouts get fight bonuses and that’s what I’m looking to do. I don’t care if they’re an exceptional and significant striker because, at the end of the day, I’m exceptional and significant, too.