Will There Ever Be Another Brock Lesnar? 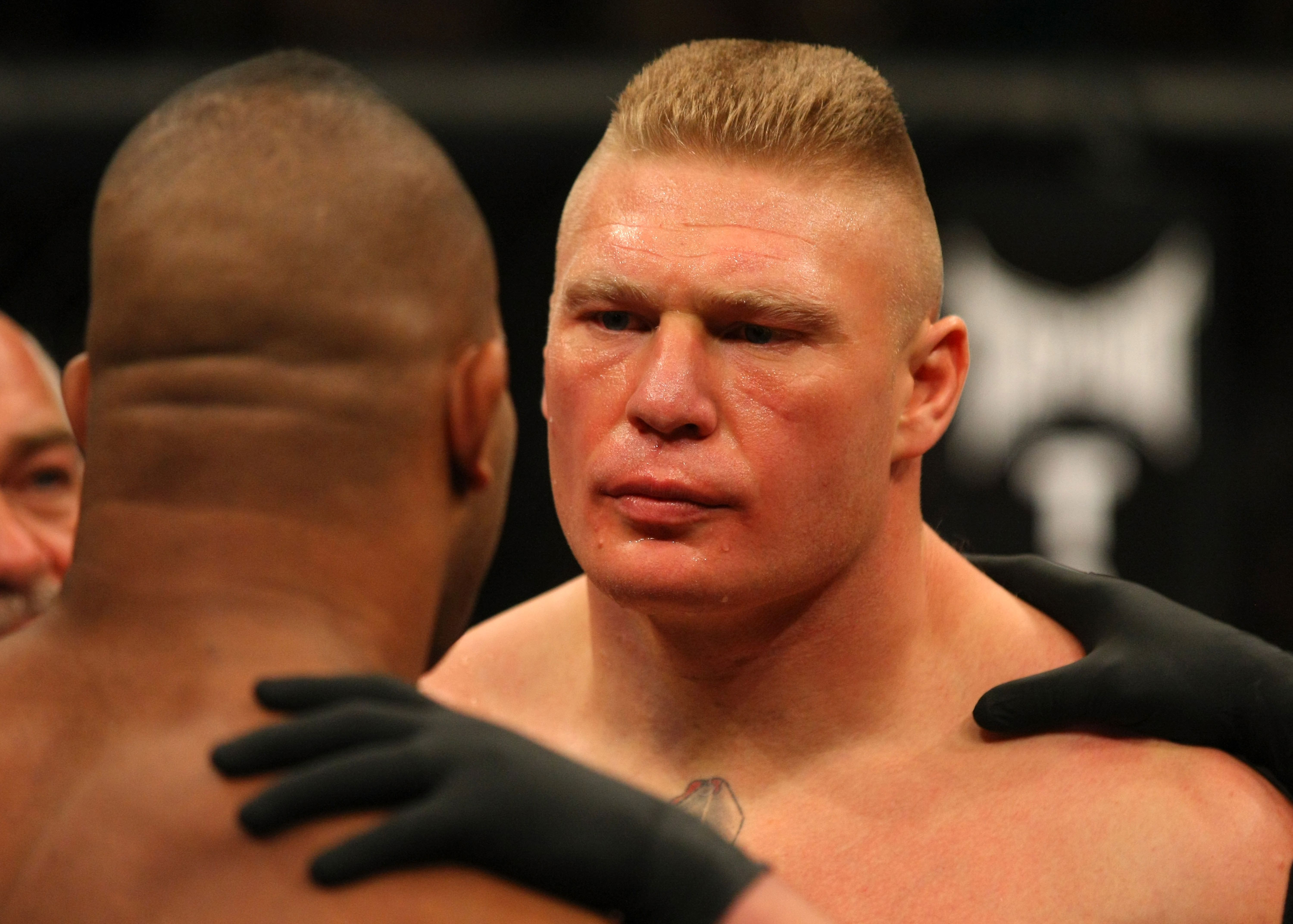 Brock Lesnar is a unique athlete, the once-in-a-generation type.

That may read like hyperbole to some, but consider facts. Lesnar was a four-time All-American collegiate wrestler—twice at Bismarck State College and twice at the University of Minnesota. He won national championships at both schools and ended his collegiate wrestling career with a 106-5 record.

The gargantuan heavyweight then spent the next three-plus years of his life accumulating millions of dollars from playing a starring role in the world’s most popular male soap opera—World Wrestling Entertainment. He had to maintain his sculpted, 270- to 290-lb frame for the audience, while also learning crazy acrobatic sequences that were part of his stuntman-like performances. Remember, though, that his time in the WWE included no actual athletic competition. It was pure acting—albeit physically demanding and, oftentimes, physically deteriorating acting, but acting nonetheless.

Then, after his three-year competitive hiatus, Lesnar decided that he wanted to play professional football. No, not Arena League ball. Not the XFL. Not NFL Europa. And certainly not the semi-pro version that some bar room heroes play on weekends. He wanted to play defensive tackle in the National Football League. Sure, he had elite NFL size, strength and speed for his position. Lesnar’s 40-yard dash time was reportedly 4.7 seconds. That would have ranked first among defensive tackles at the 2011 NFL Combine. But the guy hadn’t played a down of football since high school. Shockingly, he earned playing time in a couple of preseason games and was a late cut with the Minnesota Vikings.

With his football stint over, Lesnar turned his attention to mixed martial arts. Lots of accomplished collegiate wrestlers do the same thing, so it was a natural progression in his athletic life. Yet, his foray into the sport was anything but normal.

Lesnar fought just one time before signing a contract with the world’s biggest and most competitive MMA promotion, the UFC. It was an easy, first-round win over a grossly overmatched opponent. That was the last “gimme” of his career. Three fights later, he defeated Randy Couture for the UFC heavyweight championship.

Say what you will, but that is a jaw-dropping feat. In my opinion, it is the single-most impressive accomplishment in sports. Can you imagine anyone defeating Georges St-Pierre, Jon Jones, Anderson Silva or any other reigning champ after three career fights? Those things happened back in the dark days of the UFC, when fighters were one-dimensional, part-time fighters, not world class athletes dedicating their lives to the sport of mixed martial arts.

I’m going to go out on a big, sturdy, safe limb. Nobody will match Lesnar’s accomplishment in any UFC weight class in the next 20 years, if ever.

Haters will cite the fact that Couture was tailor made for Lesnar. I don’t disagree with that fact. Couture didn’t have the wrestling edge, so he could neither force the fight to the ground, nor keep it standing. He was a serviceable boxer but lacked the power to actually hurt Lesnar on the feet. And Couture has never been a submission wizard from his back. From a matchup standpoint, Couture was the perfect foil for Lesnar’s championship run. But he was still competing against the most decorated fighter in UFC history.

Lesnar proved his win over Couture was no fluke over his next two fights, both wins. Frank Mir is arguably the best heavyweight submission fighter in the world, and certainly a far better striker than Lesnar. Yet, he was beaten from pillar to post over two brutal rounds, unable to mount any semblance of an offensive attack against the champion before succumbing to strikes.

Shane Carwin, like Lesnar, is a monstrous physical specimen with amazing athleticism. He also possesses bone-crushing power in both of his fists. Lesnar survived adversity through most of the first round before dominating Carwin in the second en route to a beautiful submission win.

Lesnar’s two consecutive successful defenses of the UFC Heavyweight Championship matches the record set initially set by Couture and then matched by Andrei Arlovski and Tim Sylvia. His 707 consecutive day reign is the longest in UFC heavyweight history, 84 days longer than the previous record established by Couture. I don’t care if part of that time was spent sidelined due to his health. He still defended the belt as many times as anyone else, including one defense after diverticulitis reared its ugly head.

Of course, his fall from greatness was just as sharp as his rise through the sport. My good friend Thomas Gerbasi put it best. Lesnar’s career was like a shooting star—it didn’t last long and it burned out at the end, but when it was at its peak, it was something you wouldn’t miss seeing for the world. It is a brilliant description of Lesnar’s MMA career.

Dare I say that Brock Lesnar deserves to be inducted into the UFC Hall of Fame now that he has hung up the vale tudo gloves. His career accomplishments justify it, despite the fact that he only competed eight times. Those accomplishments bear repeating. UFC heavyweight champion in his fourth career fight. Two successful defenses ties for the best all-time. Reigning for 707 days is the longest in history.