Wildcard Wiman Enjoys The Calm Before The Storm

“When I think of me and Siver, I think of co-main event. It’s gonna get nuts." - Matt Wiman 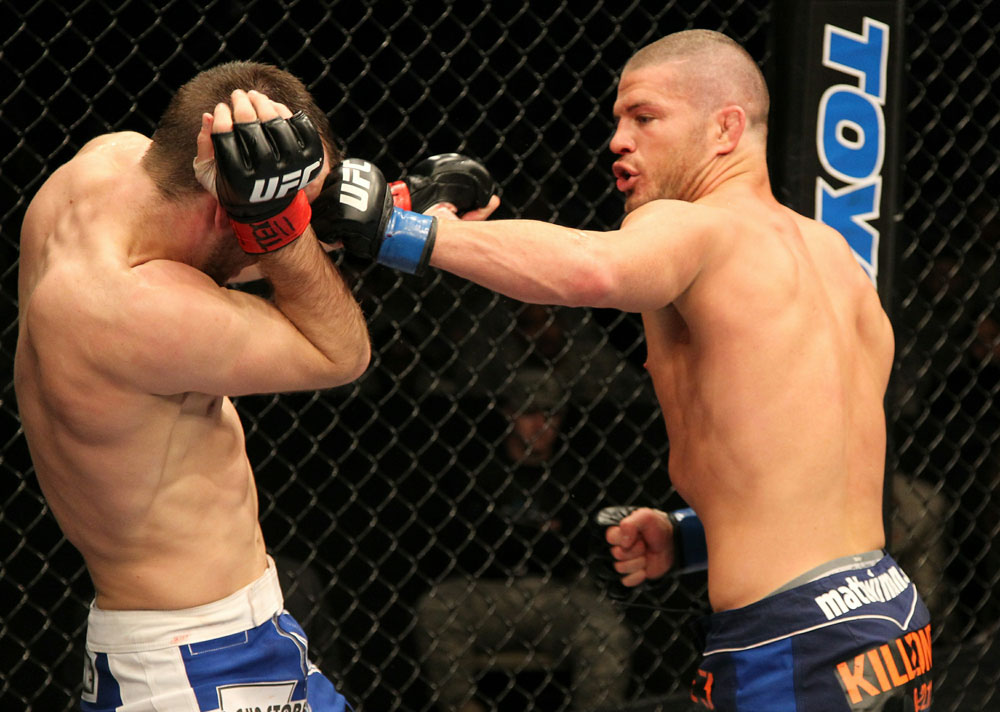 Some professional athletes run to the media, never seeing a camera that they didn’t like. Lightweight contender Matt Wiman, an affable sort with a good sense of humor who is not afraid to tell his story, is still getting used to the whole process, even though he’s fought 10 times in the UFC and even appeared on season five of The Ultimate Fighter.

And it’s not that he’s uncomfortable in the glare of the spotlight, but he knows the perils that come with believing the hype placed on your shoulders.

“I think recognition gives guys a false sense of security,” said Wiman. “People knowing who I am, they think I’m the best fighter, and at the end of the day, some super hungry cat that’s up and coming and fighting out of fear can get you. And the recognition doesn’t make the established fighter any better. So I just try to stay more focused on what I think about myself and what my team and family think about me versus what other people do.”

Nearly seven years into a pro career that began with three fights (all wins) on one night in August of 2004, Wiman has seen plenty, and in doing so, he’s decided to take his own path through the fight game, one that may not coincide with the usual M.O. for success.

So maybe that’s why he went on TUF after already making his UFC debut, why he hasn’t done 600 interviews leading up to his UFC 132 bout with Dennis Siver this Saturday, or why he’s chosen to roll the dice over the years when it’s come to training camps. It’s not that he doesn’t take things seriously, but in jumping to different teams and gyms while he and his Courtney live their lives as a young, married couple, he may be taking a chance that he will one day end up in a place with no UFC-level coaches and training partners. Wiman, who is now living in Arvada, Colorado, and finishing up his second camp there, understands the risks, but so far, it’s worked for him.

“I thought about that before, and I think it’s good to change it up a bit,” he explains. “I think you can get lackluster training with the same guys, even if there are guys coming in from different gyms because quite often you kinda see the same faces and you know what the guy’s gonna do and he knows what you’re gonna do. What I’ve found is that you’ll find good guys almost everywhere that can really help your game. I definitely had fantastic training at the Skrap Pack in San Francisco (with Gilbert Melendez), but I have that out here as well, and I’ve got a bunch of guys coming through here that are great. They’re giving me good looks and advancing my game.”

Currently working with the Kline Brothers’ Easton BJJ school, as well as visiting training partners Rich Crunkilton and Josh Clopton, Wiman seems to have found a home in Colorado, and if his January win over Cole Miller was a harbinger of things to come for the Arvada resident, he may want to stick around a while.

“My wife and I like to move around a little bit, see different sights, and enjoy our freedom,” he said. “If we find a place where we feel like settling down, then we’ll do that, but I definitely like Colorado. Besides the scenery, the things to do, and the fun you can have here, the training partners that I’ve found have been super great tough guys and good human beings. My wife also has a great job here and it’s pretty awesome. I like training at high altitude and the weather’s beautiful.”

Any fighter will tell you that the more peace you have in your life outside the gym, the better you will perform inside it, as well as in competition. The Miller fight saw Wiman at his best, a bold statement considering his three Fight of the Night awards and six UFC wins leading up to the bout. But against his TUF5 castmate, he was firing all cylinders, disciplined, yet fiery, aggressive, but still controlled. The unanimous decision win was his third in a row and his biggest to date, but he’s not about to say that it was his springboard into the big time.

“I’ve had good victories in the past too, and you just gotta stay focused and treat each fight like its own fight, that nothing matters and that this fight is everything,” he said. “The past is the past and this is for all the marbles.”

It may be. On the UFC 132 main card, Wiman will have a sizeable audience watching him work against Germany’s Siver, a fighter on a nice hot streak of his own, and with a fourth consecutive victory, he will have earned the right to throw his name into the discussion for a future title shot. It’s a possibility he isn’t even considering at the moment.

“I don’t really know or care where beating him puts me,” he said. “I just want to beat him, and if I just keep being the best fighter that I can be, and keep stepping forward, then I’ve accomplished my goals, and that’s the plan. If I can say that I’m the best fighter that I can possibly be, overcame challenge after challenge, and stepped forward and persevered, then I’m happy.”

Has the 27-year old ever strayed from this approach to fights, where the natural inclination is to say ‘well, if I beat this guy then I get this one,’ etc, etc?

“I don’t think I’ve even overlooked an opponent or ever looked forward,” he said. “At the same time, I try not to overly respect my opponent and build him up into this monster because I need to do my thing, and when I do my thing, it doesn’t matter. I think I’m a better fighter than Siver, and if he fights my best and I fight my best, I’m gonna win.”

He does have plenty of respect for Siver though, both personally and professionally.

“When I look at Siver, I see a guy who came into his own and who is right now the best fighter that he’s ever been,” said Wiman. “I’m glad about that because I want to fight the best guys and I want to fight them when they’re at their best. There’s no point fighting someone while they’re down and out or up and coming and tough and nobody knows or cares who they are. You want to take that challenge and overcome it. Beating him now is huge. He’s a great fighter and I’m a fan of his. I spoke to him a couple times and he seems like a really nice guy. It’s sad that one of us has to lose, but it’s definitely not gonna be me. It’s not even an option.”

As for the fight itself, with Wiman and Siver combining to win post-fight bonus checks in 33% of their UFC bouts, the odds are good that there will be some fireworks come July 2nd.  Wiman is not about to dispute that assertion either, even though the bulk of the UFC 132 attention has gone to the top three fights on the bill – Dominick Cruz vs. Urijah Faber, Wanderlei Silva vs. Chris Leben, and Tito Ortiz vs. Ryan Bader.

“When I think of me and Siver, I think of co-main event,” he smiles. “It’s gonna get nuts. But I guess to the rest of the world, I guess it’s just a regular good fight, and that’s okay, I’ve been in that position before. Me and Sam Stout, we were actually marked as the first fight on the undercard (at UFC 97 in 2009) and it didn’t seem like too many people cared about our fight, and that was Fight of the Night. And they actually moved us and we fought after Chuck Liddell (vs. “Shogun” Rua) and right before Anderson Silva and Thales Leites. But I’m happy to be on the main card and people are gonna see a great fight.”

He does know that the attention focused on him will amp up even more if he wins, but if it doesn’t, he’s cool with that as well.

“It keeps you humble and it keeps you focused and more like a person than a celebrity,” he said. “I think it’s cool like this. I like being a wildcard, almost under the radar.”

Can he do it forever though?