"If you look at me and Joseph (Benavidez), we’ve been known to the world, and Ian
McCall and Yasuhiro Urushitani are both champions in their own
organizations. So we’ve got the best fighters in there." - Demetrious Johnson 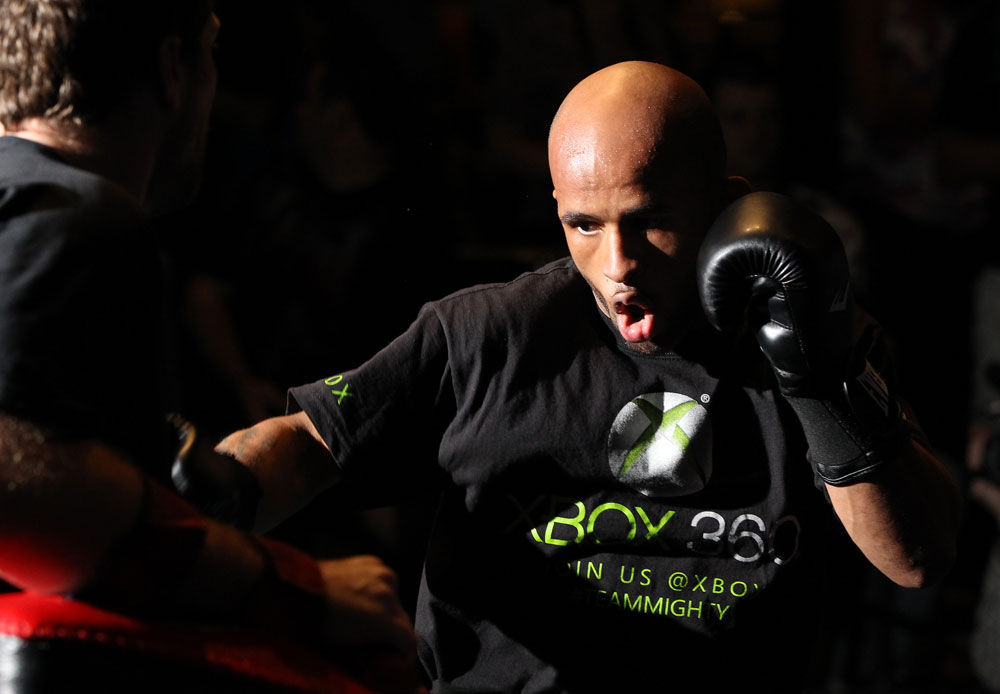 Demetrious Johnson wasn’t going to wait around for the flyweight division. In fact, following a crazy star-making turn in 2011 that saw him defeat Kid Yamamoto and Miguel Angel Torres in his first two UFC bouts before losing a competitive five rounder to bantamweight champion Dominick Cruz in October, he was plotting his way back up the ladder to the 135-pound belt on the way home from Washington, D.C. with head coach Matt Hume.

“I was on the train of thought that I was gonna make another run at it and climb my way back in the line,” said Johnson. “I was heading home, and Matt was like ‘the only reason you lost that fight is because he kept taking you down and holding you. We’re gonna go home and grapple, grapple, grapple, and get a lot of mat time.’ And that’s what I did, along with working on my standup and all that good stuff. As far as I was concerned, I was going after the 135-title again. I was getting ready for Eddie Wineland, I signed the contract, and I was ready to go.”

The proposed January bout with Wineland had to take a back seat though, when Johnson got the call some of his peers had been chomping at the bit for: the long-anticipated arrival of the flyweight division to the UFC was coming in March, and the organization wanted “Mighty Mouse” to be one of the Fab Four to introduce the 125-pounders to the UFC faithful.

“I was excited,” said Johnson. “At the time I was getting ready for Eddie Wineland, so I started my training camp back in November and I was training, trying to get big, eating whatever I wanted, and enjoying life. And they gave me a call and said ‘okay, switch things up. You’re gonna fight at flyweight. We can’t tell you your opponent yet, but just get ready.’ I was like ‘dang.’ (Laughs) While it’s fantastic to be at 125, now I’ve got to start dieting. But I’m excited that the UFC wanted to me to be one of the representatives of the weight class when it debuts.

This Friday night (Saturday AM in Australia) is that debut date, as Johnson joins his UFC on FX 2 opponent Ian McCall, Joseph Benavidez, and Yasuhiro Urushitani in the first ever UFC flyweight tournament.

“Joseph Benavidez, we fought on the same card together and we’re pretty good buddies, “said Johnson. “We had a great time in Australia (on a recent press tour). As for Yasuhiro Urushitani, I watched a couple of his fights just to see who he was and to get a little feel for him. He seems like a pretty tough guy. If you look at me and Joseph, we’ve been known to the world, and Ian McCall and Yasuhiro Urushitani are both champions in their own organizations. So we’ve got the best fighters in there.”

But the only one on his mind right now is McCall, another former WEC bantamweight (along with Johnson and Benavidez), who reinvented himself at 125 pounds with three 2011 wins over Jussier da Silva, Dustin Ortiz, and Darrell Montague, a trio of victories that has many considering him the top flyweight in the world. Has Johnson been paying attention? You bet he has.

“Honestly, I keep my eye on guys that are amateur right now,” he laughs. “I watch everybody because you never know who’s gonna be the biggest next thing. Ian McCall has done a great thing for himself going down to 125. He was doing good at 135 from what I remember and now he’s ranked number one in the world, and I can’t wait to get in there and mix it up with him.”

At just 25 years old, Johnson finds himself in a great spot in his career. After bursting on the scene with his wins over Yamamoto and Torres, his loss to Cruz made it pretty safe to assume that a return bout would be a ways off. But now, he’s a win away from making history by fighting for the UFC’s first 125-pound title. It’s almost the perfect scenario, to not have to wait for a phone call for your next fight, and basically knowing that night who you’ll be fighting next should you win. And whether it’s intentional or not, Johnson makes it clear who he believes he’ll be facing with a win over McCall.

“I never like to count my eggs before they hatch,” he said. “I’ve got a tough opponent in front of me, he’s no joke, and he’s coming to fight, as I am as well. But yeah, if I get past him, it’s gonna be real nice to go yeah, Joseph just beat Urushitani and I guess me and Joseph are gonna fight, and all we need to know now is the date.”

Hmm, a subliminal message maybe? Johnson-Benavidez is an interesting matchup though, should both emerge victorious this Friday. The only question is, the two are buddies, so how will they react to the prospect of punching each other in the face? Well, if Benavidez needs any reason to dislike the Parkland, Washington product, just read his recollection of cutting weight at bantamweight.

“There was no cut at all,” said Johnson. “I would eat whatever I wanted to up until the night before the weigh-ins.”

Now those are fighting words. In all seriousness though, Johnson, who walks around at anywhere from 145 to 148 pounds, will have to do some work now to make it to 125. But that’s fine with him, as it’s clear that he’s still in the MMA version of the honeymoon stage.

“I’m just enjoying the ride, and I appreciate everybody out there who follows me and who is a fan of mine, and I appreciate the UFC setting up things like the Australia press tour,” he said. “It gave me a chance to get out there and meet some fans and get them excited for the UFC flyweight division and the FX card coming out there. Honestly, I’ve been blessed and I can’t wait to put in work against Ian McCall and show the UFC why they love to send me places and take care of me.”

So what should anyone who hasn’t seen the flyweights in action expect this week?

“Great guys who have great fighting skills and are non-stop action,” he said. “Great cardio, great technique, and there are gonna be some finishes there as well. You can expect a lot of great things.”