The UFC begins a three fight 2012 series in Canada with UFC 149 in Calgary this July... 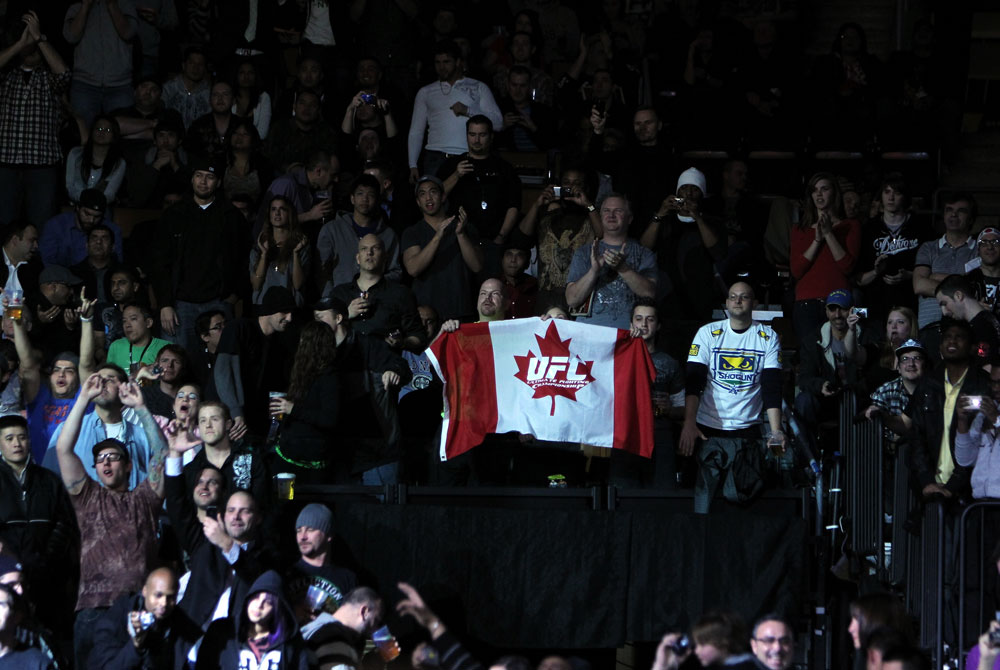 It’s become almost impossible to argue with UFC President Dana White’s stance that Canadian fight fans are the best in the world.

The Octagon’s love affair with the Great White North began on April 19th, 2008, with a UFC 83 event headlined by a welterweight title fight between Matt Serra and Georges St-Pierre. Over the past four years, the UFC has held eight events in Canada, in three different cities (Toronto, Montreal, and Vancouver), with over 200,000 fans in attendance, and a live gate totaling over $40 million. White’s declaration that Canada is the “new Mecca of mixed martial arts” will be a self-fulfilling prophecy, as the UFC announced the Octagon will be crossing into Canadian territory three times in 2012, including an inaugural event in “The Heart of the New West”: Calgary.

Wednesday, White and Director of Operations for UFC Canada Tom Wright held a press conference in “The Stampede City” to not only address Calgary’s UFC 149 date on July 21st at the Scotiabank Saddledome, but to disclose two additional Canadian shows this year and a promised three return visits in 2013. On hand for this momentous occasion were local UFC favorites Jason MacDonald, Mitch Clarke, and Nick Ring. Also, two of Canada’s biggest cagefighting stars, Mark Hominick and UFC welterweight champion St. Pierre attended live via satellite.

Even though UFC 149’s slate of fights have yet to be determined because it’s still four months away, White was fully prepared to whet the fans’ appetite with a mere mention of one man. “Jose Aldo will be defending his title here,” asserted White to a deafening roar from the crowd that the UFC’s featherweight championship belt will be contested in their fair city. “Just from the turn out today, you know I want to bring a sick card here. We always deliver good fights. I'm so pumped to come back up here with a sick card and blow the doors off that arena.”

If all goes accordingly, UFC 149 should also host a retirement match for middleweight “The Athlete” MacDonald. In December of 1999, MacDonald began his professional MMA career in Calgary with an armbar submission win. With a 26-15 overall record that includes 13 Octagon appearances, MacDonald is scheduled to meet Tom Lawlor on May 15th at UFC on FUEL TV 3 in Fairfax, Virginia. Regardless of the outcome, the resident of the Alberta province would like his farewell fight to be in front of these especially ravenous fans.

“If I had a dollar for everyone who has texted me and called me in the past two weeks who wanted tickets I wouldn't need to fight,” jokes MacDonald. “Every time I travel to the UFC, it is a plane full of people from Calgary. Hopefully I will retire from the UFC at the Calgary show. It is special for me.”

The second Canadian event will be UFC 152 on September 22nd in Toronto. There are even scarcer details surrounding the show in the nation’s largest city, but, not to worry, in 2011 alone three UFC weight divisions defended their belts in Toronto: 145, 170, and 205 pounds. Featherweight top contender Hominick took time from his training to publicize UFC 152, but “The Machine” is determined to get back to his winning ways on April 21st in Atlanta against Eddie Yagin. “I have a task at hand at UFC 145 and I'm going to get the job done.”

The Octagon’s final, and possibly the biggest, Canadian event in 2012 will be UFC 154 on November 17th in Montreal. “Hopefully, I will have the chance to fight in front of my Canadian fans in November,” says St-Pierre, who is unquestionably the biggest name in the sport, let alone Canada, and is currently rehabbing his surgically repaired ACL. “Even though I'm feeling 100% right now, I'm halfway through my rehab and I cannot push too much. I'll be training full out around July.”

Everyone has their fingers crossed, including and especially White and St-Pierre, that the UFC welterweight champ’s rehab and return to full-time training go perfectly for “Rush” to fight at UFC 154 in a title unification bout against interim champion Carlos Condit. St-Pierre’s last match was last April against Jake Shields at the historic UFC 129 at the Rogers Centre in Toronto. Following that, he was injured leading into scheduled meetings with Condit and then Nick Diaz, which led to GSP getting surgery, Diaz fighting Condit for the interim belt in February at UFC 143, and Condit being crowned interim champion. St-Pierre’s goals are simple and clear, “Right now, I'm focusing on my knee; after that, I am focusing on getting my title back.”

After four years of great fights and even greater fans, Canadians are being rewarded for their insatiable desire for caged fisticuffs with three UFC events this year and three more in the next. Starting off this MMA madness will be the groundbreaking UFC 149 pay-per-view in Calgary with the headlining human highlight reel Aldo putting his UFC featherweight championship belt up for grabs. If that wasn’t enough for the US’ Northern neighbors, the UFC will return for the 3rd time to Toronto with UFC 152 and mark its fifth time in Montreal with UFC 154.