QUEBEC CITY, April 16 – After a little over nine years, Canada finally has an Ultimate Fighter winner. Actually, after wins by Elias Theodorou and Chad Laprise, the country has two, as both Team Canada members emerged victorious in their TUF Nations final bouts Wednesday night at the Colisee Pepsi, joining the line started by Forrest Griffin on April 9, 2005.

Even the Team Canada coach got into the picture, with Patrick Cote defeating his TUF Nations counterpart Kyle Noke via decision.

Criticized for his less than scintillating bouts on The Ultimate Fighter Nations, Ontario’s Elias Theodorou left those critics with nothing to do but give him his just due after a spectacular second round TKO win over Team Canada squadmate Sheldon Westcott to win the middleweight division of TUF Nations.

There was no feeling out process between the two former training partners, with Westcott (9-2-1) 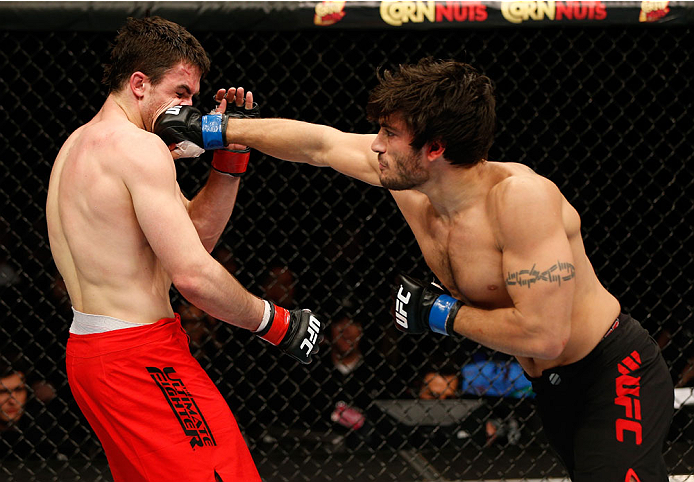 drawing first blood with a takedown that was followed by the Albertan taking Theodorou’s back. Theodorou (10-0) rose with Westcott still on his back, and he was eventually able to toss him off, landing several hard strikes in the process. Westcott kept looking for the takedown, taking elbows to the head for his trouble, but not getting his foe to the floor.  In the final minute, Theodorou impressed with his striking attack, scoring repeatedly.

Timing Westcott’s rushes perfectly, Theodorou continued to tag his opponent early in the second before putting him on the deck. Once standing, Theodorou’s dominance continued, with a thudding slam following shortly thereafter. With less than two minutes left, Theodorou got into the mount position and then took Westcott’s back before settling into half-guard, where he fired off right hands repeatedly until referee Philippe Chartier stopped the bout at the 4:41 mark.

In a battle of Team Canada unbeatens, Chad Laprise was able to defuse the ground game of the favored Olivier Aubin-Mercier and win the welterweight division of TUF Nations, scoring a hard-fought three round split decision victory.

With the crowd firmly in his corner and chanting his name, Aubin-Mercier began the fight aggressively, looking to tag Ontario’s Laprise with right hands before setting up a takedown attempt. And he was successful with the rights, but as the round moved on, Laprise showed more confidence as he threw off the takedown attempts and began landing more shots.

Aubin-Mercier started off the second round strong, tagging Laprise with some strikes before finally getting his takedown. Laprise defended well on the ground though, making it back to his feet quickly. Aubin-Mercier didn’t lose his cool, peppering his opponent with kicks to put more points on the board while Laprise finished strong, trying to take the round on the scorecards.

Laprise tossed away Aubin-Mercier’s first takedown attempt of the third round, but he couldn’t avoid the second. Regardless, he was able to jump up immediately and defend the Quebec native’s follow-up try, and his accurate punches on the tiring Aubin-Mercier were silencing the crowd until the final minute, when the chants of “Ollie, Ollie” kicked in. It was Laprise again finishing the stronger of the two though, sealing the win and the TUF title.

Noke got the scoring started with several kicks, but it was Cote who got off an equalizer with an overhand right that marked up the Australian around the left eye. With two minutes gone, Cote shot in for – and got – a takedown, and he proceeded to fire off ground strikes, with each blow drawing a roar from the crowd. Noke stayed busy from the bottom, landing elbows as he looked for submissions, but Cote stayed out of trouble while giving plenty of it to Noke. 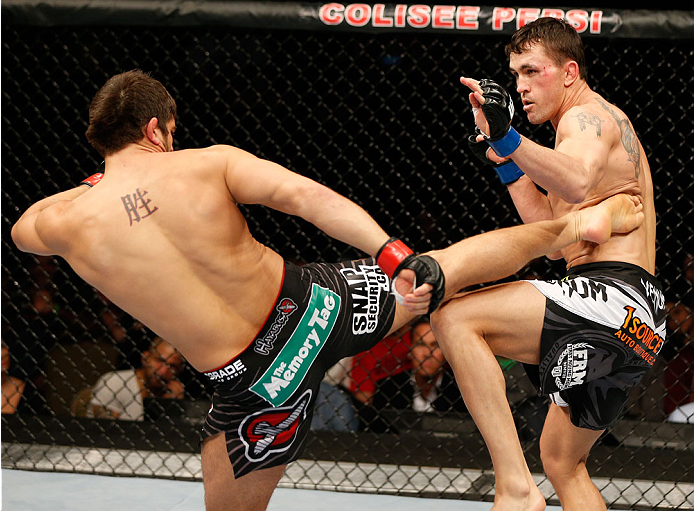 While shooting for a takedown in the opening minute of round two, Cote ate a knee from Noke, as well as several follow-up shots, quickly putting the Aussie back in the fight. Cote, now marked up over the left eye, continued to take some hard shots from Noke, but midway through the round he was able to put his opponent on his back. After eating some shots, Noke got back to his feet, with a stand-up stalemate lasting until the end of the round.

Fatigue set in for the two veterans in the final round, but Cote may have pulled away on the scorecards with a takedown at the three-minute mark. Noke fought back to his feet with 30 seconds left, but he wasn’t able to secure a final fight-saving rally, leading the crowd to erupt as soon as the final horn sounded.

Featherweights Dustin Poirier and Akira Corassani put on an exciting show to kick off the main card, but it was Poirier emerging with the victory – his third straight – by stopping Corassani in the second round.

Poirier’s striking was sharp from the start, and in the second minute he was able to stagger Corassani briefly. The Swede’s response? Swing back harder, and with under three minutes left, he got a little payback that forced Poirier (16-3) to respect his power. What followed were some fierce exchanges, with Poirier holding the edge, but Corassani refusing to back down. At the tail end of one of these exchanges, Poirier nearly finished off a choke when he caught his opponent’s neck, But Corassani got loose, bloody, but unbowed.

Corassani (14-5) tried to use more movement in round two to keep Poirier from getting his feet set, but a blistering right uppercut jarred the former Ultimate Fighter 14 cast member and sent him to the fence. Poirier kept the heat on and after Corassani hit the deck and covered up, a couple follow-up blows brought in referee Dan Miragliotta to stop the fight 42 seconds into round two.